But it is the project’s potential to reflect lives of lesser-known women that particularly excites McGee. “One of my fears is people will only see these high-profile women in this project,” McGee said. Makers: Women Who Make America, she said, “is a conscious effort to tell untold stories, and local stories of women everywhere making a difference.” 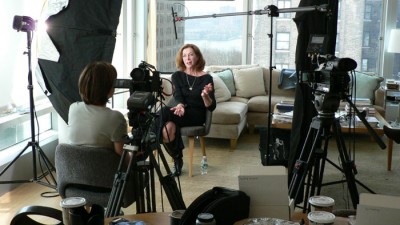 Katherine Switzer became the first woman to run in the all-male Boston Marathon in 1967 after she signed up as “K. Switzer.” She’s one of dozens of women interviewed in Makers: Women Who Make America, a PBS documentary film airing next season. (Photo: Courtesy of Makers)

The idea came to McGee around 2005, after she approached feminist Gloria Steinem about producing a film about her life. “Gloria’s first reaction was, ‘My story is part of a collective of stories,’” she recalled. McGee started researching the movement and discovered a generation of women whose work was largely undocumented.

“Feminists, women paving the way in their own way, as well as women opposed to the movement — so much has happened over the past 50 years,” McGee said. She envisioned creating not only a documentary but also an online archive.

McGee immediately wanted public television as a partner — “it’s a project made for PBS,” she said. Then, “I thought about the huge digital piece and realized I needed funding.” McGee met with AOL President Tim Armstrong, who had been speaking publicly about the need for more content targeting women.

“Dyllan literally brought Tim Armstrong here to PBS for a meeting,” said John Wilson, PBS programming chief. “His enthusiasm for partnering on this went well beyond just promotion. His support enabled her to get the documentary under way. Credit goes to Dyllan for her imagination and sheer energy,” he said, in joining the two partners for their first major project.

McGee assembled a panel of advisors, including Steinem, who helped develop criteria for deciding whom to include in the project. “We were mindful to choose women who were diverse on all levels, such as age, race, perspective on the women’s movement, and profession,” she said.

In choosing the series title, McGee wanted a phrase that was “inclusive, energetic, short and catchy, that would resonate both on TV and online, and would make people want to learn more.”

Early sit-downs with Supreme Court Justice Ruth Bader Ginsburg and former member of Congress and Democratic vice presidential candidate Geraldine Ferraro, the first woman to be nominated for national office by a major party, convinced others to participate.

McGee and her producers generally scheduled interviews for up to two hours but realized early on that for the Web they needed short clips, anywhere from 30 seconds to four minutes, instead of lengthy, in-depth pieces. “This is built around the way video is being consumed online,” she said. Producers Betsy West, Barak Goodman, Pamela Mason Wagner and Peter Kunhardt (McGee’s husband) are reviewing hours of footage to pull together individual threads of the larger women’s movement for the documentary.

That will run in three primetime hours on PBS in February 2013, narrated by actress Meryl Streep.

While the film and website showcase well-known personalities, “they also lay the groundwork to draw in stories of individuals we may never have heard of,” PBS’s Wilson said.

Fifteen station grants from WETA of between $8,000 and $12,000 will help pubcasters identify and record their own women “makers.”

“There is such a great opportunity for stations to truly customize the project,” said Anne Harrington, WETA director of interactive media and outreach.

“I think the real power of this initiative is the impact the project will have on young people — they will get to experience history in a new way,” Harrington said. The stories “really peel back the layers of who these women are and make them seem more real to kids, both young girls and boys. And once they see that, once they get what ‘makes a maker,’ they can start to see those same qualities in themselves.”