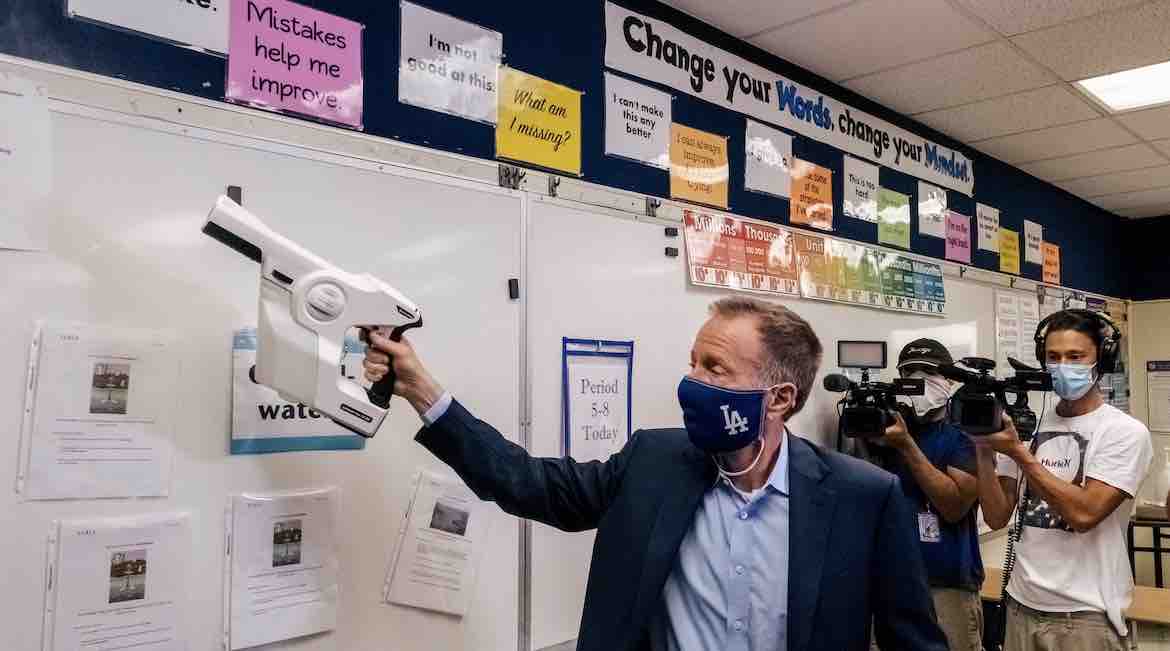 A public media collaboration that began during last year’s coronavirus lockdowns has relaunched as a multiplatform daily local news production airing on PBS SoCal and KCET in Los Angeles.

Produced in partnership with Southern California Public Radio’s KPCC and LAist, SoCal Update is a series of short video segments that air weeknights on both PBS stations. It’s also distributed as digital video shorts on social media and as a podcast.

In each two-minute episode, host Cara Santa Maria interviews KPCC or LAist reporters who covered one of SCPR’s top stories of the day. “It’s digestible, it’s short,” said Santa Maria, a former reporter/producer of KCET’s investigative news series SoCal Connected. “You can learn from it … you can integrate it and then move on with your day. And I think that’s really important.”

The collaboration between KPCC and PBS SoCal/KCET began last spring when Juan Devis, CCO for the public TV stations, recognized that Southern Californians were looking for timely, accurate information on the growing COVID-19 health crisis. His stations didn’t have the capacity to produce daily local news coverage. SoCal Connected, a weekly show, was on production hiatus. Seeking a partnership with another news outlet was a no-brainer, he said.

“We cannot build a news operation in a minute,” he reasoned. “How can we partner with another public media entity in our market?”

After Devis reached out to KPCC, the stations partnered to create Reporter Roundup, a daily on-camera news show with Devis hosting Zoom video conversations with multiple editors and reporters from KPCC and LAist.

During the five-minute roundup, each reporter delivered a scripted story about a top news event of the day, adding vocal and visual variety with quotes and photographs from their stories.

The partners were able to launch the show quickly because “both organizations were nimble and open to experiment,” said Kristen Muller, CCO for KPCC and LAist.

Devis agreed, adding that the collaboration enabled the stations to come together to focus on a singular question: “How can we serve our community in the best way?”

When Reporter Roundup launched last April, the coverage focused on local news related to the pandemic, such as school closures and COVID-19 testing. Journalists from KPCC and LAist provided most of the news reporting, while the team at PBS SoCal and KCET handled editing and provided additional reporting.

As daily production continued through the fall, coverage expanded to provide short summaries of other critical news stories, including deadly summer wildfires, local protests over the killing of George Floyd, and the shooting of two L.A. County sheriff deputies in Compton, Calif.

“All of a sudden, we were not only talking about COVID; we were talking about health disparities, equity, social unrest, diversity in the newsrooms,” Devis said. “And these were conversations that were not necessarily happening in other [news] sources here in Southern California.”

Reporter Roundup aired on KCET, and the video was posted for streaming on the station’s website. KPCC and LAist used audio from the production for their podcast The L.A. Report, a daily reporter roundup.

The partners also experimented with social media platforms, where Reporter Roundup struggled to build audiences, according to Devis. But TV ratings encouraged the stations to keep going, he said. Programmers had scheduled the updates during KCET’s most-watched timeslots, and the viewership was “fantastic.”

Devis and Muller gathered their teams early this year to discuss the partnership and what they had learned from it. Afterwards they agreed to pivot from Reporter Roundup to SoCal Update.

Although Reporter Roundup started without any funding in place, a donor who recognized the value of the program backed production of SoCal Update through June, the end of the stations’ fiscal year. Devis is confident that additional financial support will arrive.

In addition to relaunching with a new title and branding, SoCal Update‘s production has been upgraded to incorporate B-roll, audio clips, archival footage and film. The format was shortened to present one or more reporters discussing their stories with Santa Maria in a two-minute segment. The teams produce two segments each weekday.

PBS SoCal and KCET air the segments during separate program breaks in early fringe, prime time and late fringe time slots. Both segments are compiled into a four-minute update that airs at 8:56 p.m. Pacific time Monday through Thursday on KCET.

SoCal Update is uploaded to YouTube, posted on the TV stations’ websites and turned into a downloadable podcast for KPCC. It’s also available to stream on the free PBS app.

SoCal Update reaches a weekly average of 185,147 viewers on PBS SoCal and KCET, according to Nielsen.

The partners announced April 19 that Santa Maria had taken over as host. Devis described her as an obvious choice for the position. “She’s a great journalist, great on camera. She has a great audio voice as well,” he commented.

“And of course, having a Latina be the face of KCET and PBS SoCal with the SoCal Update was extremely important for us,” he said. “After all, we’re 56-plus percent Latino, Latina, Latinx here in Southern California.”

The editorial framework of SoCal Update has shifted as well. Producers intentionally craft news stories that reflect the diversity of Southern California. The focus on “cultural journalism” is its strength, Devis said.

“We’re much more concentrated in history, social justice issues, and we’re starting to curate these daily reports to open up to other conversations. We are starting to bring much more of our own editorial point of view as part of this process,” he said.

Already, Santa Maria has seen reactions that show viewers appreciate the clean, straight news that’s culturally relevant. “Day one, when I did my first recording, I shared the clip-outs via social media,” she said. “And one of the first comments was somebody saying, ‘How refreshing to see two people communicating about something that’s happening in the world without arguing, talking over each other or giving their opinions.’”

Devis and Muller describe SoCal Update as an opportunity to extend the reach of their news coverage. By sharing their reporting talents and the journalism they produce, the partnership “maximizes the work that a newsroom is doing,” according to Devis. One news segment feeds multiple audio, visual and social media platforms.

The stations also boost their visibility by publishing the updates on platforms that reach different audiences. Muller added, “For public media to thrive, we need to find new ways of collaborating and reaching new audiences, and this partnership has been a terrific experience.”

The success metrics for SoCal Update vary. Sustained funding will be a clear barometer, as will upticks in viewers and listeners. For now, the partners are focused on delivering quality, community-based journalism. Eventually, Devis hopes to produce longer news specials that deal with hot-topic issues of the day, such as a 30-minute special edition of Reporter Roundup that covered Black Lives Matter protests throughout Los Angeles.

Correction: An earlier version of this article gave incorrect information about the airing of the four-minute version of SoCal Update. It airs only on KCET, not on PBS SoCal; it airs at 8:56 p.m. Pacific time, not 5:56 p.m.; and it does not lead into PBS NewsHour or BBC World News.