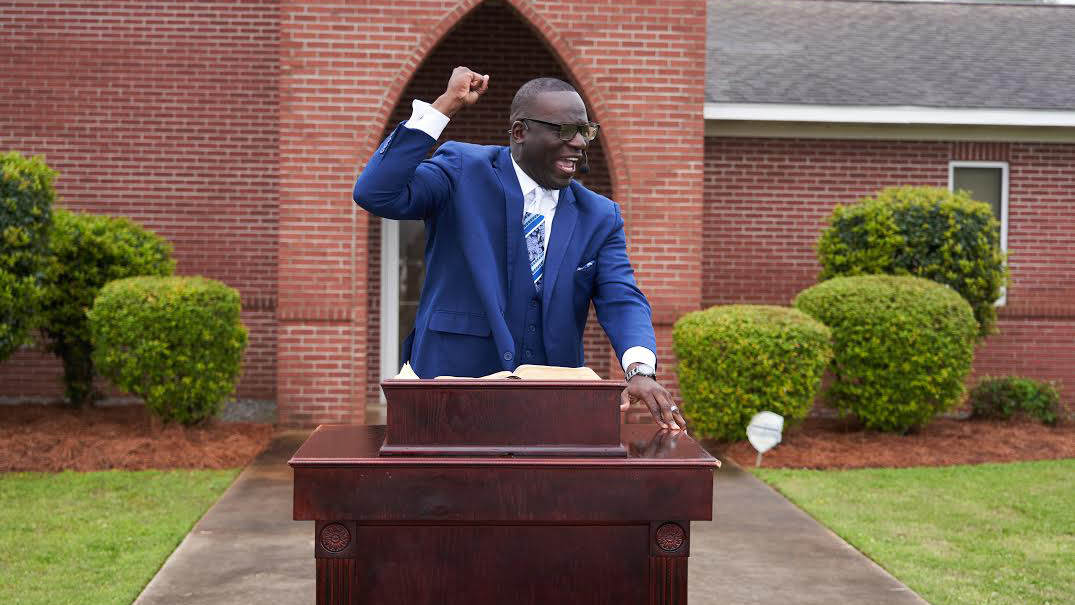 Charles E. Hamilton, one of the pastors interviewed in the first episode of the special report, gives a sermon.

The journalists behind APM Reports’ In the Dark podcast have paused production on the show’s third season to produce a six-part special report on COVID-19 in the Mississippi Delta.

Host and Lead Reporter Madeleine Baran pivoted the podcast from its previous format — longform investigative reporting focused on criminal justice — to Coronavirus in the Delta, a shorter series produced remotely from Minnesota that focuses on how Mississippians are handling the outbreak.

“We didn’t think that it made sense for us to sit on the sidelines when this huge pandemic was happening and affecting peoples’ lives in all kinds of ways, people we personally knew, and places that we personally lived in,” Baran said.

Baran had sunk roots in Mississippi to report the podcast’s second season, which followed the court case of Curtis Flowers. Flowers was accused of murder in Winona, Miss., and was tried by a prosecutor seeking the death penalty in six different trials. The case went to the Supreme Court, where Flowers’ conviction was reversed in June 2019.

Baran lived in Mississippi and interviewed witnesses listed in the case, Flowers’ family and other locals. When the COVID-19 epidemic began spreading through the U.S., Baran spoke to many of the sources in Mississippi from the Flowers story about how they have been affected.

In the Dark’s team worked remotely from Minnesota on Coronavirus in the Delta over the course of six weeks as COVID-19 cases increased. They interviewed sources by phone and recorded segments from home.

As of Monday, the state of Mississippi had 9,908 cases of COVID-19, according to the Mississippi State Department of Health.

Two episodes of the series have already been released. The pilot episode, released April 30, focuses on the difficulties of holding church services virtually by speaking with pastors and churchgoers.

The second episode, published May 6, focuses on how inmates in the Mississippi State Penitentiary, also known as Parchman Prison, are trying to protect themselves from infection. Media outlets have reported on COVID-19 in the prison system, Baran said, “but this idea of what it’s like for the guys in there, I thought I really hadn’t seen elsewhere.”

In the episode, Randy Anderson, an inmate at Parchman, detailed the difficulties of following CDC guidelines to protect himself against COVID-19 as he shares his space with over 100 men in close proximity. He lacks access to face masks and has to wash his hands in “filthy” water that is reminiscent of “the backup from sewage.”

Though Baran remarks that “It’s a dark series,” she said she has received positive feedback from listeners about the new season, including family members of inmates in Parchman Prison.

“At least the listeners I’ve heard from, they’re grateful to see that we are still reporting on Mississippi, that even though we’re not there, we feel a responsibility to help tell stories that are not being told that we think are important on the pandemic,” Baran said.

Baran said the short-run series is not a “departure” from the show’s investigative reporting, nor should it be considered a third season of In the Dark. She halted production of the third season —she declined to say what it will be about — and plans to continue producing it when the show’s team can resume in-person reporting.

In the Dark’s first season, which debuted in September 2016 and earned a Peabody Award, detailed the 27-year-old cold case of the abduction of Jacob Wetterling and how the Stearns County Sheriff’s Office in St. Cloud, Minn., mishandled the investigation.

The third episode of Coronavirus in the Delta will be released Thursday.