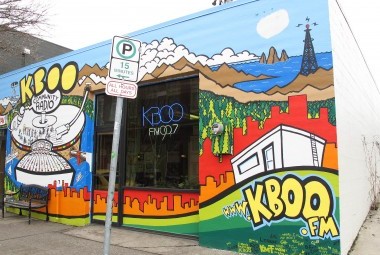 Founded in 1968, KBOO has seen many managers come and go, with the latest to depart unable to win support from staff for her agenda. (Photo: Scott Beale)

KBOO-FM in Portland, Ore., has new leadership at the top and on its board after a station manager’s bid to revamp workplace practices at the eclectic left-leaning outlet met with heated resistance.

Founded in 1968, KBOO has seen many managers come and go, with the latest to depart unable to win support from staff for her agenda. (Photo: Scott Beale)

The dispute that engulfed KBOO shared themes with conflicts at other community stations around the country, such as WJFF in Jefferson, N.Y., and Pacifica’s outlets. KBOO staff and volunteers rose up against Interim Station Manager Lynn Fitch, invoking the threat of “corporatization,” launching personal attacks and galvanizing support on blogs and online forums.

Marathon public meetings became tense and emotional, prompting some board members to resign. Dueling factions backed separate slates of nominees for board elections, with a “Committee to Keep KBOO as KBOO” formed to beat back Fitch’s efforts.

In September, about 700 KBOO members — roughly 14 percent of its total membership — elected four Committee-backed candidates to the board. Fitch resigned, and the station hired interim station manager Victoria Stoppiello Oct. 8. KBOO will look to fill the position permanently, said Board Chair S.W. Conser.

With the dust settling, stakeholders vary in their degree of optimism about KBOO’s future. A “new positive energy” will help to attract new donors, says News Director Jenka Soderberg, who along with much of KBOO’s staff opposed Fitch’s efforts to restructure the station.

Others who backed Fitch worry that KBOO has suffered self-inflicted wounds, compromising its ability to attract foundation funding or to grow the audience that provides its primary source of revenue, listener donations.

KBOO’s staffers “want to do things the way they’ve always been done,” says Marc Brown, a board member who resigned in May as the dispute grew more intense. “That’s a big obstacle to KBOO’s continued survival. . . . Oddly enough, the most progressive organizations are also the most conservative, in that they’re always seeking to conserve how it’s always been.”

“Change is scary, but change is necessary,” Fitch said in a May 19 interview on KBOO several months before resigning. “Maybe I have not been as diligent as I could be in helping people to not be so fearful about this, and I’m sorry about that.”

Membership on the decline

Arguments among KBOO’s stakeholders centered in part on the dilemma facing many other community radio stations: how to balance the desire to showcase a wide range of politically left-wing views while also attracting enough listeners to stay viable.

KBOO boasts a distinguished pedigree among community stations. It signed on in 1968 with help from Lorenzo Milam, a passionate Johnny Appleseed of community radio. KBOO took its call letters not from Halloween hijinks, Milam later pointed out, but from a potent strain of marijuana known as Berkeley Boo.

“If we weren’t smoking dope at the time — or at least thinking about it — we never in a hundred years would have applied for that frequency in Portland back in those dark days of the late ’60s,” Milam once wrote.

“We certainly had better things to do at the time — what with FCC investigations, antiloyalty hearings, the FBI bugging us about our radical programming, none of us getting laid . . .”

That radical programming, an eclectic patchwork quilt of shows largely hosted by local volunteers, became KBOO’s trademark in Portland. But its magnetism weakened in recent years, a shift that some attribute to Barack Obama’s presidency. Without a Republican in the White House proposing policies that rile up liberals, listeners lose interest in its programming.

KBOO doesn’t buy Arbitron data, so its audience can’t be measured. But its donor base has dropped almost 30 percent in less than a decade. It had 7,000 members in 2004, according to a 2008 National Federation of Community Broadcasters assessment. As of May, KBOO had 5,000 members, Fitch said in her KBOO appearance. (She declined Current’s request for an interview.)

In 2007, the station lost its annual $200,000 federal subsidy because it fell below minimum listener-support requirements for CPB’s community service grant program. It has run deficits since 2008, covering shortfalls with reserves.

To reverse the decline, some staffers and board members argued, KBOO needed stronger leadership. Since the 2010 departure of station manager Arthur Davis, KBOO had been managed collectively by staff.

“We did not have the crucial skills, training and experience to manage and protect KBOO,” wrote Debbie Rabidue, a former finance coordinator, in a May 5 post on Portland’s Indymedia website. “Not much really got accomplished in that 2 and a half year period.”

Last October, KBOO’s board appointed Fitch, then the station’s development director, to serve as station manager. With a grant from Portland’s Meyer Memorial Trust, KBOO sought help from an adviser to Oregon nonprofits and began reviewing its policies and board and staff structure.

The analysis found that many of KBOO’s policies were outdated and “convoluted,” Fitch said in her May interview. Job descriptions were not clearly defined: after Davis resigned, staffers had divided up his responsibilities among themselves. NFCB had recommended in 2008 that KBOO update its staff structure, Fitch said, and the FCC had frowned on its practice of allowing employees to hold interim positions over extended time periods.

Fitch enjoyed the support of her board, which voided two-thirds of the outdated policies and endorsed her work to revamp them. But she encountered resistance when she took her proposals to KBOO’s staff.

“Some immediately saw her as a target, because she was the authority and taking authority, and she was doing it differently than it had been done,” said Brown, the former board member.

Some staffers balked at policy changes such as filling out time cards, Brown said. A plan to redefine staff as at-will employees also provoked a backlash. And employees opposed Fitch’s proposal to lay off staff and post hiring notices for redefined positions, with the expectation that former staff would reapply.

That “was the most fair and equitable way to think about doing it,” Fitch said. But that plan never moved ahead.

KBOO staff voted in May to unionize with representation by the Communications Workers of America. At the recommendation of the station’s attorney, Fitch called on Bullard Law, a Portland law firm whose advertisement of “union avoidance” services on its website did not sit well with KBOO’s left-leaning volunteers.

“That’s standard fare for corporate America,” wrote KBOO volunteer Theresa Mitchell on Save KBOO, the blog of the Committee to Keep KBOO as KBOO. “[A]nd it is a big reason why we have KBOO, as an alternative.” Mitchell hosts a show described on KBOO’s website as a “weekly counterpropaganda and Left opinion program.”

“I have been convinced that a small faction desired to remake KBOO as a toothless and inoffensive boutique station,” Mitchell added.

Mitchell and other critics of Fitch allege that the station manager also intended to revamp the station’s eclectic programming. Fitch wanted to “change the nature of the radio station from an all-volunteer station to having more syndicated programming and more paid hosts,” said KBOO’s Soderberg. “Her vision for what KBOO should be challenged its traditional focus on the underserved and underrepresented, giving a voice to the voiceless.”

But during a May 4 station meeting, Fitch said, “I have never talked about watering down the programming. . . . I don’t have time to think about programming,” according to a transcript on KBOO’s website.

At times, the tenor of the disagreements veered toward the personal. In a May 7 Indymedia post, Mitchell linked to an online record of Fitch’s December 2012 arrest in Portland for driving under the influence.

Fitch discussed the DUI in her May 19 appearance on KBOO. She explained that she was falling asleep after leaving a KBOO event and had erred in trying to drive home.

Escalating personal attacks spurred Brown to resign from KBOO’s board. “I’m fine with arguing issues and discussing issues,” said Brown, an attorney who has also served on the board of a Portland food co-op. “But I don’t do it in situations where people are going to make personal attacks and not listen to the facts.”

In July, KBOO’s board reinstated its previous policy manual and put the new manual in abeyance. Fitch resigned Sept. 9.

“I don’t think Lynn was prepared for this,” said Hadrian Micciche, a former KBOO board member who was removed from the board in July after he emailed Portland media contacts about the station’s problems. “She asked if the board had her back, and they said they did, but they didn’t.”

“We seemed to be coming together as a board, and everybody seemed to be focused on doing what was best,” said Paula Small, who resigned as treasurer of KBOO’s board Aug. 16. But, along with Fitch and fellow former board members, Small points to close friendships between KBOO staffers and board members as an obstacle. Others argue that the station’s insular culture hurts its ability to build a broader community of listeners.

Soderberg disagreed, however. “KBOO is actually really involved in the community,” she said, pointing to the station’s Spanish-language programming, its shows tailored to African-American listeners, and the wide range of community organizations represented on its airwaves.

With listener support declining, former board members believe that KBOO will need foundation support to grow but that the internal struggles have hurt its image. “No other grantor is going to want to throw money away on KBOO,” Micciche said.

Micciche predicts that KBOO’s new board and interim station manager will come to recognize the need for staff restructuring. “They’ll have the same difficulties, but it’s getting too late,” he said. “It’s hard to steer the ship away from the iceberg.”

2 thoughts on “With board support gone, KBOO leader calls it quits”