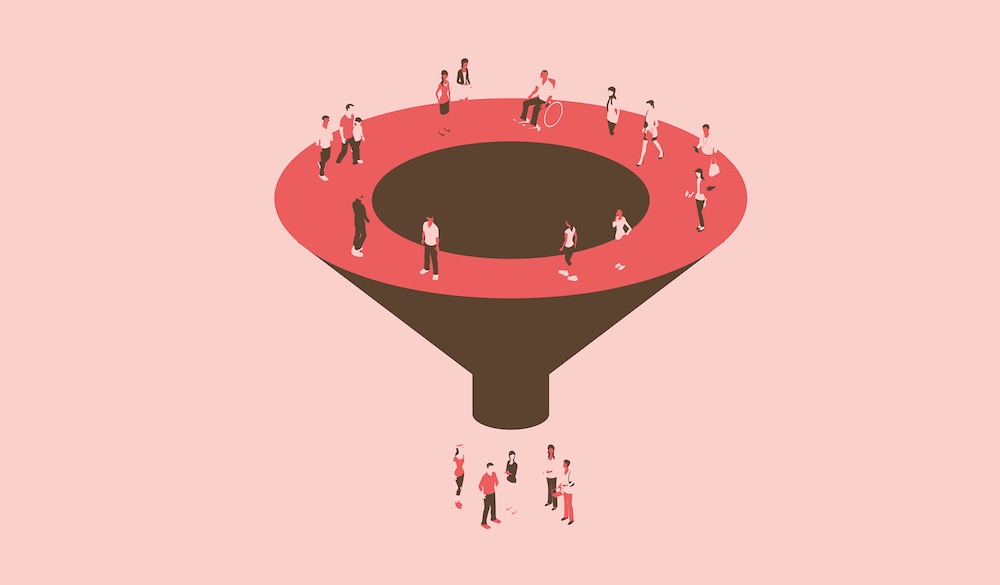 As some public radio stations are finding success with donor acquisition, two recent studies show signs of sluggish membership growth across the system as a whole.

By contrast, during the same time period the topline number of donors to all donorCentric stations increased at the median by 6%.

A big drop in the share of new donors making a recurring donation is also a source of concern, said Deb Ashmore, principal analytics consultant at Blackbaud, who shared the findings at the Public Media Development and Marketing Conference in July. The share of donors giving any recurring gift in the previous four fiscal years was at least 40% but dropped to 34% in 2020.

“This may have simply been a natural outcome of shifting and shortening live fundraising campaigns during the early months of the pandemic, and I hope it is,” Ashmore told Current. “Because if new donors continue declining overall, that means retention of those donors is going to be more important than ever.”

Greater Public’s most recent Benchmarking study found growth in donors over the last five fiscal years. But its findings also pointed to indicators that could signal a reversal of that trend.

The Greater Public study, which tracks fundraising performance at the same 54 public radio stations, revealed that members donating under $250 annually had grown 9% since fiscal year 2016. Meanwhile, revenues from those donors’ contributions grew 18%.

The differential between the growth of new donors at lower giving levels and total revenue is a red flag, according to Jay Clayton, Greater Public’s individual giving advisor, who also presented at the PMDMC. “We’re basically starting to squeeze more money out of the same people,” he said during the session, referring to members who contribute less than $250 annually.

In an interview, Clayton said public radio fundraisers need to keep the double-digit donor revenue growth in perspective. “On the surface, that’s wonderful. Stations pay their bills with money, of course,” he said. “Where I get concerned is when we’re not seeing the number of givers grow at the same rate [that] the revenue is growing.”

“I don’t want to spell disaster here,” he said. But if the trend continues, stations could start to see a decline in givers and revenue.

“Our experience shows us that you start with the givers and the money will follow,” Clayton said. “You focus on the givers — because if you focus on trying to squeeze a little bit more out, on average, of a fixed number of givers, eventually you’re going to get to the point where some people will feel like what they can do isn’t enough and they can lose interest altogether.”

The donorCentrics study showed a similar trend. Though the median number of public radio donors has grown 6% since FY16, the uptick flattened out over the past four fiscal years. Meanwhile, revenue increased 26%.

Always on the hunt for new donors, stations have been experimenting with tactics to counter these trends and convert listeners to membership. Some are trying different ways to configure on-air fund drives or acknowledge sustaining members. The Public Broadcasting Atlanta radio station WABE recently tried asking sustaining members to give more. The response prompted the station’s fundraising team to rethink that approach.

“The future of any public radio station is not necessarily wrapped up in the dollars that it makes from year to year,” said David Barasoain, PBA’s senior producer of special projects. “It is the growth of members, it is the growth of donors, because you can grow a donor over time.”

Not unique to public radio

Public radio isn’t the only nonprofit sector affected by some of these fundraising trends, according to Ashmore.

“​​The flatness in donors … is something that we’ve been seeing outside of public radio, outside of public broadcasting for many years now,” Ashmore said. “This is a trend that we’re seeing … in general right now: fewer donors, bigger dollars.”

Changing demographics are contributing to the trend, she said. Gen Xers are maturing into the prime giving years of their 50s but make up a much smaller portion of the population than baby boomers and millennials, she said.

Retention is especially important, Ashmore said. Over the last five fiscal years, the total number of new donors in public radio fell 6%, reactivated donors declined 4% and retained donors grew 18%, according to donorCentrics research. Success with retention has helped to boost the total number of donors by 12%, she said, adding, “All of the donor growth is driven by retention.”

Sustainers are key to this strategy, Ashmore added. DonorCentrics found that 81% of new sustaining donors continue contributing to the station after 13 months. By comparison, 36% of public radio’s new single-gift donors renew their memberships 13 months after the transaction.

To improve retention, she recommends converting sustainers who pay by credit card to electronic funds transfer or PayPal. These payment methods retained sustainers at higher rates. The first-year 13-month retention rate for EFT was 91% at the median, but only 14% of donors made their gifts through EFT. By contrast, the retention rate for credit card users was 78%, according to the donorCentrics analysis.

WABE experienced a squeeze of fewer people giving more in fall 2019, when its fundraising team decided to ask for sustaining donations of $15 per month. Prior to the drive, the average gift was about $14 per month, according to Barasoain.

A data analysis had shown WABE had the potential to add another 10,000 donors, said Aishah Rashied Hyman, VP of business development and planning.

But the $15 ask turned out to be “too high,” Barasoain said. Though the team was happy with the total revenue the drive brought in, the bigger gifts came at the expense of suppressing the number of donors by an estimated 12%–16%, he said.

During WABE’s previous two fall drives, on-air pitches requested gifts in any amount. The total number of pledges for the fall 2019 drive dropped 34% compared to fall 2017 and 20% versus fall 2018.

In the 2019 drive, “we were tapping the same group of donors to give more and more money to the station,” Hyman said. “And it’s just not sustainable long-term.”

The station immediately pivoted and lowered its pledge-drive asks.

WABE has also been working on strategies to build its sustainer program and improve retention.

During the last five fiscal years, the station has been investing in telemarketing and direct-mail fundraising, Hyman said. Both methods work to retain and upgrade donors acquired during pledge drives. WABE targets annual donors with direct mail and sustainers with telemarketing.

“It doesn’t mean we don’t need our pledge drives,” said Emily Pelton, VP of development at PBA. “It all has to work, but I think all those things are pointing in the direction that this is a tactic that’s worth the investment.”

Since 2013, when WABE started offering sustainer memberships, the program has grown to include 63% of its members, according to Hyman.

Radio stations in Charlotte, N.C., and Seattle have been growing their membership programs with strategies to make donating as accessible as possible.

At WFAE in Charlotte, the number of sustainers has grown to about 12,000 since 2015, said Jeff Bundy, executive director of branding and engagement. At the same time, the station’s entire membership has grown nearly 70%, with similar growth in donor revenue.

The push for sustainers “​​has been really important for retention,” Bundy said. One tactic the development team uses to attract new sustaining members is offering each donor the flexibility to set the amount of their monthly gifts. With no minimum donation level for sustaining gifts, monthly donations are accessible to more people.

KEXP in Seattle prioritizes “participation first,” said Erin Lightfoot, director of annual and digital philanthropy. “We’ve always really highlighted … ways that everyone can participate in supporting the station no matter what their financial capacity is, and also being extremely grateful for that.” During on-air drives, pitch announcers vary the requested giving levels.

“We do try to vary it a lot in order to make sure that we’re really inviting everyone in no matter what their capacity or their comfort level is with gift-giving,” Lightfoot said.

Most of WFAE’s donor acquisition occurs during on-air pledge drives, Bundy said. Local challenges and raffles for premium items — such as a car or a $15,000 Lowe’s gift card — get listeners to participate. Depending on the drive, listeners can vote for their favorite nonprofit, local business or school.

For raffles, listeners who are already sustaining members are given one complimentary entry automatically. On-air messaging for them encourages sustainers to increase their monthly giving amount to gain more entries.

With no giving limit, some donors pledge $1 per month to participate in the raffles. There is no donation requirement to vote in local challenges, which culminate at the end of the drive when the organization with the most votes wins $2,500 worth of on-air messaging at WFAE.

The challenges typically bring in a lower average gift than other on-air campaigns, “but those are the days where we see the highest percentage of new contributors,” Bundy said.

KEXP’s membership skews younger than other nonprofits, and their gifts to the station “might be their first time participating in charitable giving,” Lightfoot said.

With new donors, KEXP puts a lot of thought into how it brings them into its community from when they start listening. For on-air messaging, the fundraising team tries to focus on discussing what the station is about and the potential impact of a donor’s gift, Lightfoot said.

KEXP DJs try to “build that awareness with new listeners from the get-go,” so that when a pledge drive comes on, “they already have some understanding of the impact of donating and why donating is important and the impact it has on the music that they hear,” Lightfoot said.

In the last five years, KEXP has nearly doubled its donors and donor revenue, Lightfoot said; 65% of donors are sustainers. In 2020, the retention rate for sustainers was 88%.

“Sustainers have such an important impact on … financial stability,” Lightfoot said. “The stability we ultimately were able to experience last year is in huge thanks to that foundational support of sustainers.”

Ensuring that a donor’s payment information is up to date is a key element of KEXP’s retention strategy, Lightfoot said. “It’s actually a lot of work for us to do the outreach and make sure that we are getting updated credit cards from donors who want to continue their sustaining gifts,” she said.

KEXP also updates its pledge premiums — which it calls “thank-you gifts” — twice per year. “Even thank-you gifts that are kind of funny can be a thing that draws listeners in and builds up that excitement for donating,” Lightfoot said.

To make sure sustainers have a similar experience to donors who give one-time gifts, the membership team offers them a gift from KEXP’s latest set of premiums. The offers coincide with the anniversary of their first donation. T-shirts, which feature a new design for each drive, are popular gift items, as are hoodies, coffee mugs, beanies and slipmats, according to Lightfoot.

With the station’s large online following — KEXP’s YouTube channel has more than 2.5 million  subscribers — Lightfoot is experimenting with direct requests for donations on social media.

“The strategy for fundraising on-air can’t be copied and pasted to social media or YouTube,” Lightfoot observed. “The audience interaction is different. The content, of course, is different. Why people may even find us on that channel is very different.”

For the coming year, Lightfoot said KEXP’s membership challenge will be “figuring out how we build the same sense of community that we have on the air in these other digital channels and hopefully also build a donor community from that.”