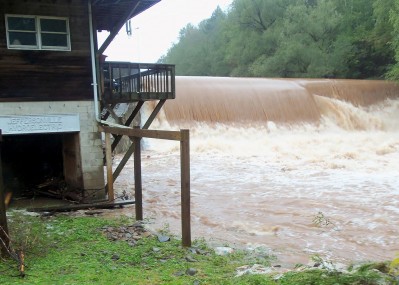 WJFF Radio Catskill runs on hydroelectric power and the passion of volunteers who invested so much time and community pride in the station that they rallied to force a change in leadership when they felt it was going in the wrong direction.

Founded 23 years ago by Malcolm Brown, a retired college professor and booster of alternative energy, WJFF attracted an eager and enthusiastic roster of volunteers to produce shows, mow the lawn and serve on committees and boards.

But after the board of trustees backed a decision to cancel a popular locally produced show, years of goodwill that had accrued to WJFF began to dissipate rapidly, resulting in a near-total meltdown of the station’s leadership structure within a few months’ time.

Making Waves, a news and cultural magazine produced by owners of the hydroelectric plant that powers WJFF, was removed from the air by Winston Clark, station manager since 2010, and a programming committee whose members he appointed. The decision riled station volunteers and supporters who were already upset by an earlier overhaul of the schedule.

During a contentious public meeting of the board in March, the show’s supporters blasted Clark for moving unilaterally to cancel Making Waves. They called for his dismissal and resignations of his closest allies on the board. In addition, Clark’s critics complained to CPB’s Office of the Inspector General, alleging that the station had violated CPB rules for open meetings and convening a community advisory board.

Clark submitted his resignation to the board of trustees April 10. At a board meeting a week later, all but one board member resigned. In a joint statement, they objected to the personal attacks that had been directed at trustees, and said their goals had been to stabilize WJFF and strengthen its programming to serve a broader community.

Within the past month, an assistant manager has stepped into the g.m.’s role on an interim basis, and Sonia Hedlund, WJFF’s remaining board member, has recruited two deejays to serve as board officers. She said she hopes to fill eight open slots with new trustees by July and is working hard to make sure the station operates transparently.

“The former manager liked to decide things on his own, and that goes against the community atmosphere of WJFF,” Hedlund said. “We’re a publicly supported community radio station, and we need to start getting back to that, but it’s not going to be an easy challenge.”

Clark did not respond to phone messages requesting an interview, nor did he mention the controversy in his April 10 resignation letter. His only public remarks on the cancellation were during the March 20 board meeting, which was recorded on video and uploaded to YouTube.

WJFF is located in Jeffersonville, N.Y., one of the vacation resort communities in the Catskill Mountains that enjoyed a heyday in the mid-1900s. Radio Catskill’s eclectic schedule augments NPR news programs with volunteer-produced shows that feature a dizzying array of musical genres, including jazz, hip-hop, oldies, soul, folk and Spanish-language music.

Locally produced nonmusical offerings include Trailer Talk, a show of interviews conducted by host Sabrina Artel, who travels to live shows and community events in a vintage 1965 Beeline travel trailer; and Making Waves, produced weekly by WJFF volunteer Kevin Gref until its abrupt cancellation in March.

With his wife, Barbara, Gref operates Jefferson Hydroelectric — better known to local as “Jeff Hydro” — which provides all the electrical power needed to run the WJFF studio across the street. The plant’s proximity to the station is no accident: Malcolm Brown and his wife bought and restored the plant prior to founding Radio Catskill. As the new owner of Jeff Hydro, Gref expanded the relationship between the power company and the station by serving on the board and producing one of WJFF’s most popular local programs, Making Waves.

During the March 20 meeting, Clark said that he put Making Waves on hiatus after the March 4 show broadcast the word “shit” twice before 10 p.m., a violation of FCC indecency rules. He acknowledged that he and the program committee previously had approached the producers about refocusing the series on local topics.

Clark’s critics complained that the station manager had wielded his power unilaterally, even though programming decisions were vetted by a committee. Multiple speakers at the March 20 meeting described being dropped WJFF boards and committees with no explanation, and complained that Clark didn’t respond to their requests to be re-appointed.

“There have been changes in programming, and I think it’s very, very important for any changes to be done very carefully,” said volunteer Heidi Schneider during the meeting. “Instead, we go and take a community program off the air just like that. I didn’t think I could feel any worse.”

“Making Waves is much bigger than just one person saying ‘shit’ on the air,” said volunteer Jill Weiner. “This is a community radio station, and that program is an example of what community radio is.”

In addition to turning out at board meetings, critics of the programming decisions turned to social media and the Internet to spread their cause. Restore WJFF, an anonymously penned blog, complained of “3+ years of unfortunate management” of the station that “fostered a culture of exclusion and opacity.”

The blog collected 110 signatures on a petition calling for Clark and top board leaders to resign. A Facebook page created for the campaign garnered 70 likes since its launch in mid-April.

Gref was among those calling for the president of WJFF’s board and her predecessor to resign. “There was a sense in the community that in order for the station to move forward, the two past presidents should step down out of responsibility for all that had gone wrong during Winston’s time as manager — and there was pressure to that effect,” Gref wrote in an email to Current.

Clark resigned during a regularly scheduled weekly board meeting April 10, which was largely held in executive session. In his resignation letter, Clark thanked the board for the opportunity to lead the station.

“I also want to pay special tribute to WJFF’s remarkable volunteers for their continuing devotion, artistry, and hard work,” Clark wrote. “I am confident that WJFF’s best days lie ahead.”

As much as the dispute over Making Waves stemmed from tensions inherent to community radio, it also grew from conflicting philosophies over how WJFF should be run.

Prior to signing on as g.m. in 2010, Clark was the longtime executive director of the Connecticut Gay Men’s Chorus. Board members who recruited him saw his management experience outside the world of radio broadcasting as an asset, said one source with insight on Clark’s relationship with the trustees. The source requested anonymity to speak frankly.

But others outside WJFF’s leadership said Clark’s management style conflicted with the station’s grassroots orientation.

Clark’s departure failed to calm the Restore WJFF petitioners, who still wanted to topple the leadership of the board of trustees. What happened next may have surprised even the staunchest critics among them.

When the board convened for its next regular meeting, eight trustees issued a joint statement announcing that they were resigning immediately. Only Hedlund, host of a weekend folk-music show, remained; Hedlund told Current that she had not known of her colleagues’ plan to depart all at once.

In the statement, the resigning trustees took issue with their critics:

“In recent months and in particular in our last two board meetings, we have been subjected to personal attacks and unfounded accusations of financial and ethical violations, none of which are true. We believe our efforts have stabilized the station’s financial position and improved its programming for the benefit of the wide WJFF communities as we have strived to look outward rather than inward. Any further debate as to the future of the station can now continue without us.”

Sonia Hedlund was the only WJFF trustee left when the fight was over. Two fellow deejays – John Bachman, center, and Glenn Wooddell – later agreed to serve as interim board officers. (Photo: T. Waddell)

Hedlund was astounded by the resignations, which put the community licensee in violation of state law as well as its own bylaws. “I was flabbergasted that my colleagues decided to resign en masse and leave things in such disarray,” she said.

Fern Lee Hagedorn, one of the trustees who stepped down, said rising tensions between the board and the community left her little choice but to resign. Allegations of mismanagement leveled at the board were false and had been distorted by local press accounts, she said.

“It was an unfortunate situation, and I think all of us were concerned with the well-being of WJFF,” Hagedorn said. “We didn’t think it was healthy for this kind of coverage to keep playing out in the media. The complete picture wasn’t being given, and the allegations were unfounded. But for the health of the station, I felt it was best for me to step down.”

“Maybe it could have been worked out,” Hagedorn added. “But it would have taken a lot of energy and focus away from the station’s goal of serving the community.”

Faced with rebuilding the board and improving relations with the Jeffersonville community, Hedlund wrote letters to about 800 Radio Catskill supporters to request financial support after the station’s April pledge drive was canceled.

Two interim trustees have been named as board officers to bring WJFF in compliance with New York state nonprofit regulations. The new board has hired an attorney specializing in nonprofits to advise it.

Weinreich, the interim g.m., previously worked in commercial radio in New Hampshire. He’s also working to raise funds and said responses from supporters have been mostly positive so far. But some volunteers are still stinging from the recent shake-up.

“I think it just finally came to the point where people felt strongly they weren’t being listened to,” Weinreich said. “What we need to do is basically keep the door open as much as we can to talk to the volunteers or community members.”

Meanwhile, Gref has returned Making Waves to the airwaves and says the station’s interim leaders have “renewed efforts toward a more transparent, more community-oriented way of doing things here at our public radio station.”

“The worst is past,” Gref told Current. “And while the few on the board that stepped down feel aggrieved, the vast majority of the other volunteers feel relieved, and some who had quit over the past few years are now back.”

Hagedorn, one of the board members who resigned, believes that WJFF can bounce back from the recent turmoil and continues to volunteer at the station.

“My local community radio is bigger than anything that has come to pass,” Hagedorn added. “We all believe in public radio, and time always helps with these things.”

This article was first published in Current, May 28, 2013.
ShareTweet EmailPrint More