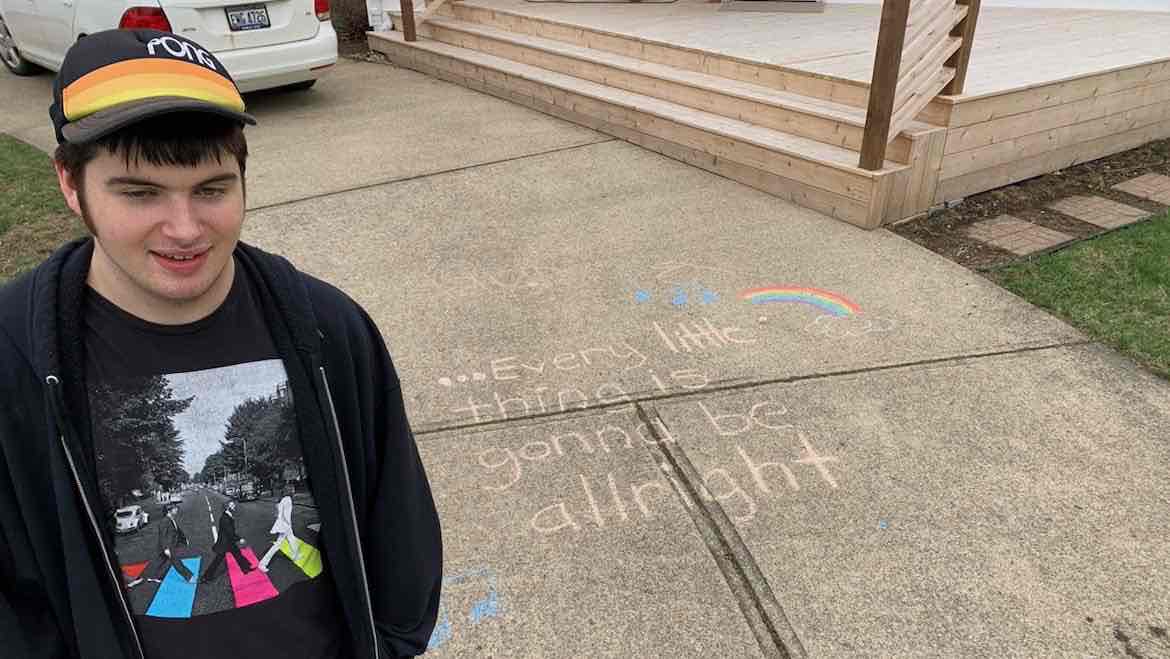 Liam Brennen of Columbus, Ohio, was featured on the debut episode of "Our Show."

When Vermont independent producer Erica Heilman was thinking about how to respond to the COVID-19 pandemic, starting a podcast wasn’t her first impulse.

Initially, she volunteered to deliver meals for the schools in St. Johnsbury, Vt., where her son is enrolled. Her offer was declined. Then she toyed with the idea of singing Gershwin tunes outside nursing homes. That’s not as bizarre as it sounds — Heilman majored in musical theater in college.

But “I couldn’t figure out the technology,” said Heilman. “You need a freaking karaoke box or something.”

Then it dawned on her: Despite her inability to be out in the world interviewing people, she could still produce a podcast. It wouldn’t be like Rumble Strip, the podcast she’s produced for seven years that The Believer magazine described as “Fresh Air, but for non-famous people who happen to live in Vermont.” But it would be made with help from Rumble Strip’s listeners, featuring stories of people dealing with the pandemic.

Now every two or three days, Heilman is releasing new episodes of Our Show, with recordings made on smartphones by people sheltering in place all over the world. Listeners are choking up as they hear the heartbreaking scenes playing out.

“People are worrying about their parents and grandparents and their jobs,” said Heilman, a single mom and former private investigator. “They’re sending me weird thoughts from the middle of the night or conversations they’re having with people they’re stranded with. I find it really moving that people are willing to talk so intimately into a handheld device from wherever they are, you know, Barcelona or Brazil or freaking Winooski, [Vermont].”

The voices range from a young girl in Florida describing what she calls a meditation about the beach to a Brooklyn man challenging his elderly mother in Chicago for going out and having her nails done.

Heilman has received close to 400 recordings. It’s a thrill every time a new one comes in, she said. “I listen to every one of them, and I respond to every person,” she said.

Though she can’t be out recording conversations, Heilman said that listening to the recordings is similar to doing an interview herself, an experience she calls akin to falling in love because “you’re trying to climb in them somehow.”

A small group of collaborators has also been listening to the recordings, including Samantha Broun, managing editor of Transom, the Cape Cod–based organization devoted to encouraging new voices in public media; Salt Lake City–based independent producer Scott Carrier; and Larry Massett, a public radio veteran in Maryland whom Heilman describes as her reluctant mentor.

Massett started making stories for NPR in the late 1970s and later did a stint at the radio documentary series Soundprint. He said Heilman called him while she was in the midst of a 10-hour editing marathon on the first episode of Our Show.

Most Our Show contributors are Rumble Strip listeners who use their phones to record their lives during the pandemic. Heilman has produced six episodes so far, each around 15 minutes. Heilman provides a brief intro in her earnest and compassionate voice and at the end of the podcast identifies each episode’s contributors. Other than that, there is no narration.

“There’s not a lot of preamble needed,” Heilman said, “and I don’t need to set a tone.”

The show’s fifth episode contains one of its more moving moments. A woman in Amsterdam whose parents were infected with the coronavirus says the hospital called and said that her father probably wouldn’t make it. But she surprises listeners, adding that a doctor later called and said he refused to give up on her father and had moved him to a better hospital. “They said they might be able to save him,” the woman reports.

In addition to musings on their lives, the podcast’s far-flung correspondents are sending ambient recordings, including chickens clucking, ocean waves lapping, cheers for London nurses, and a bush full of birds chirping in Copenhagen.

The fourth episode opens with Amelia Meath in Durham, N.C., softly singing a cappella in her closet. The same show features a young boy with a lisp reciting the number pi.

“There’s really no reason why that should be there, but it works just fine,” Massett said of the pi recitation. “I was really charmed and amazed by that.”

Our Show is reminiscent of audio postcards, according to Sarah Kramer, senior producer of Radio Diaries, the New York–based production company known for crafting documentaries from recordings made by its subjects. “They provide an interesting texture,” Kramer said of the Our Show episodes. “You could think of them as poetry that are like texture and scenes.”

Transom’s Broun, an associate producer for the podcast, thinks of the series as “a global vox pop,” referring to the radio term used for a collage of man-on-the-street interviews done to gauge public opinion.

“The counterpoint between voices and between tones and ages in Our Show is just exquisite,” said Broun. “I think that’s the reality of this moment. Whether you are a farmer in the Midwest or [someone] banging a pot at a window in the Bronx, everybody is in this together.”

Because Heilman can’t record sound for the show and isn’t weaving segments together with continuity, she can only put her stamp on the production by how she edits and mixes episodes. Massett said he was particularly impressed with how Heilman has assembled each program’s voices.

“The only way anybody could do that is by intuition,” he said. “There’s no rule book. There’s no playbook. You just have to trust your intuition when you’re doing that. And she does, and she gets it right.”

For Heilman, one of the major challenges of Our Show is working with tape she didn’t gather.

“It’s a whole different animal,” Heilman said. “You’re not thinking like an editor when the tape is being made, because you’re not there.”

She likens the process of listening to the recordings as they come in to “opening a weird Christmas present. I have no control over what it is, what it’s about. I do find myself asking follow-up questions as I listen to the tape. I’m thinking what I want to ask next and, of course, I can’t, because I’m not there.”

Heilman, 50, grew up in Charlotte, Vt., a village that borders Lake Champlain on the outskirts of Burlington. After college, she moved to New York to work in television, where one of her first jobs was as a desk assistant on The MacNeil/Lehrer Report. There she made friends with Susan Randall, another desk assistant, who would later mentor her as a private investigator, a career Heilman pursued when she returned to Vermont in 2003.

And the skill of interviewing is one of the major tools for filling the wheelbarrow.

“Erica is just one of the best interviewers of all time,” Randall said. “She’s very curious.”

The one interview Heilman has done in person for Our Show was with Ralph Rockwell, a mechanic in North Wolcott, Vt. He found out about the podcast from a welder friend who’d been featured on Rumble Strip.

Rockwell wanted to record himself but was unable to master the smartphone technology, so Heilman drove 35 miles from her home in St. Johnsbury to record him at his shop. She used a microphone attached to a broom handle and snow scraper and stood outside Rockwell’s shop while he sat inside for the interview.

Jay Allison, Transom’s executive director, will produce at least one hour from material in Our Show episodes and make it available in the next month or so to radio stations via PRX.