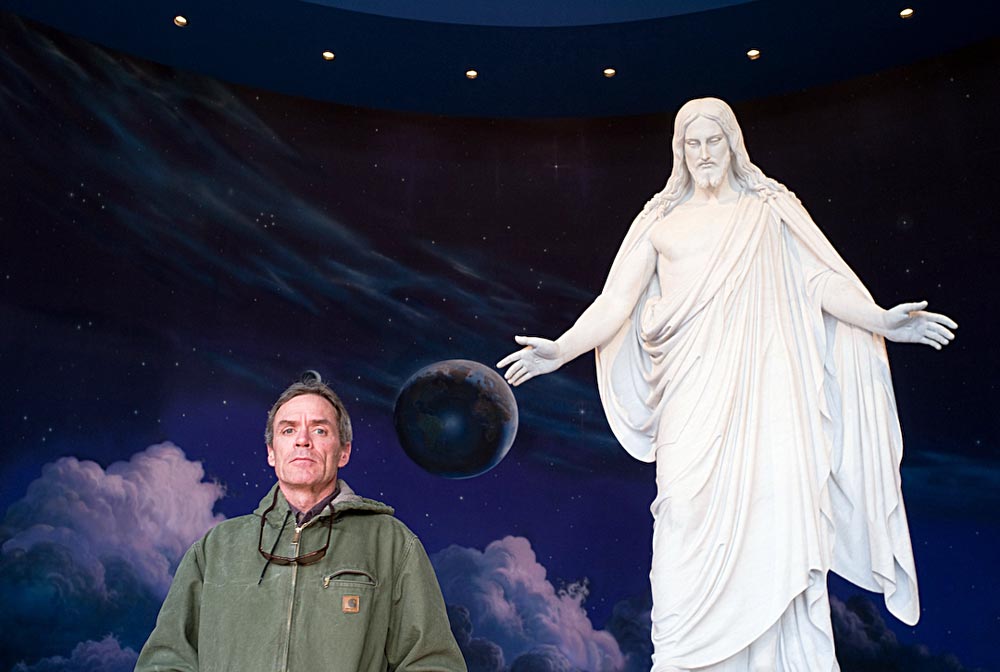 Radio takes a village. But in podcasting one person can do it all: production, promotion, distribution and financing. Doing it all, though, means one person must meet deadlines, polish this week’s story, plan next week’s and somehow keep paying the bills.

A new breed of storyteller is doing just that: transitioning from public radio into podcasting, going it alone, from recording to revenue. They’ve made some outstanding work. But the work has sometimes made them emotional wrecks.

One producer who pioneered this one-person, listener-sponsored business model is my good friend Scott Carrier with his Home of the Brave cast. His reporting has been entirely funded by listener donations since he started the podcast in February 2015. Four years and 82 episodes later, he’s taking a break for a few months. So it’s a good time to reflect on his podcast process. We talked for a couple of hours at his Salt Lake City home about reporting directly to and getting paid by listeners.

“I’m worn out,” Carrier says. “For three years I worked as hard as I ever have. But I had fun. I got to go to a lot of great places and do things I’ve never done. It was a success in my mind. I feel better about the work I did in those three years than any other in my life.”

Carrier began his public radio career in 1983 by hitchhiking cross-country, recording people along the way, then ending up at NPR in D.C., expecting them to open their doors to a stranger and listen to his tapes — which is kind of what happened. His pieces in early This American Life episodes got him a book deal and offers to write for magazines like Harper’s and Esquire. He and I also co-founded the NPR-distributed, Peabody Award–winning Hearing Voices project.

Ever since he became a podcaster, though, he doesn’t care if he does radio again. “Podcasting gave me the opportunity to think about what I believed in, what I could and couldn’t say, and what I wanted to do,” he says. “I had nobody to blame it on, except myself.” To Carrier, “the fact that people gave me money, it’s almost like a religious responsibility to prove I’m worth it.”

Excerpt from “After Thinking About What To Do” (Home of the Brave podcast) by Scott Carrier:

Carrier covered the Nepal earthquake, the NFL kneelers, the burning of Southern churches, the protests at Standing Rock, and an Indiana town’s Sanders and Trump rallies. He drove 40,000 miles in 2015 alone, traveling around the country, talking to Americans. 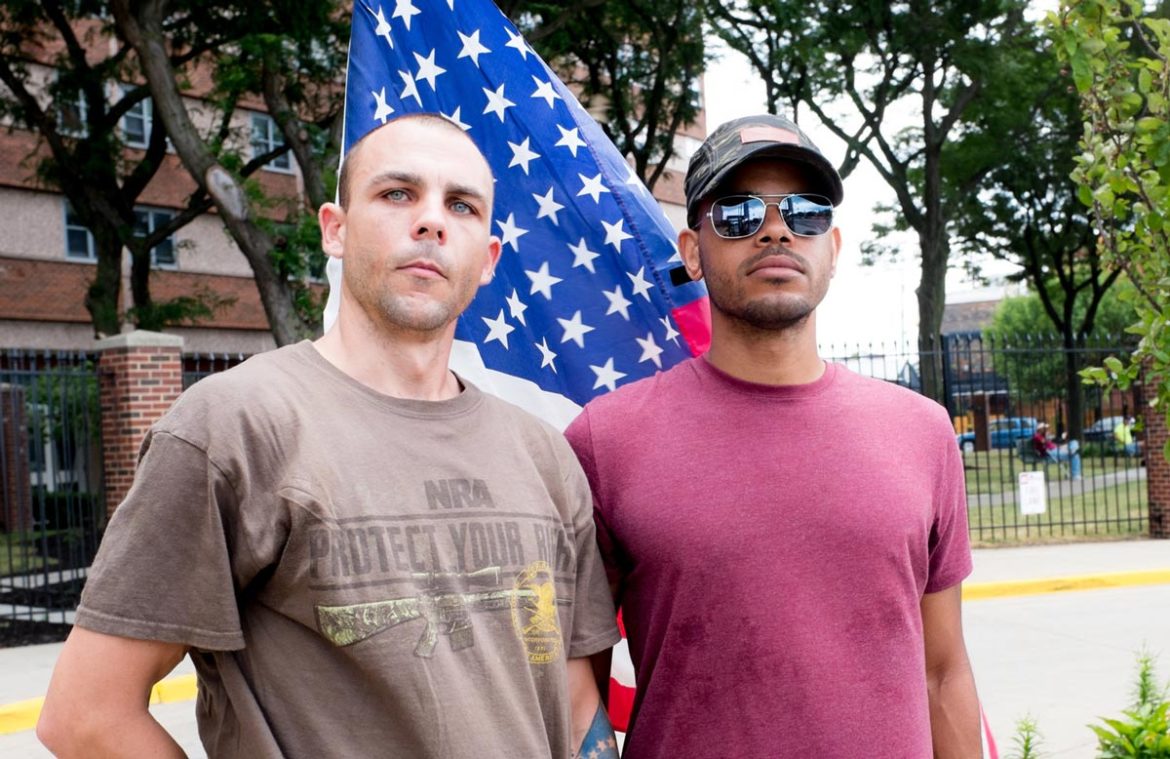 Opening Day outside the RNC Convention in Cleveland, 2016.

“We’ve never been more divided,” Carrier says. “When I was younger hitchhiking, it was a different country. it should have a different name.” What he found was “two countries and three cosmologies: Bernie, Hillary, and Trump.” 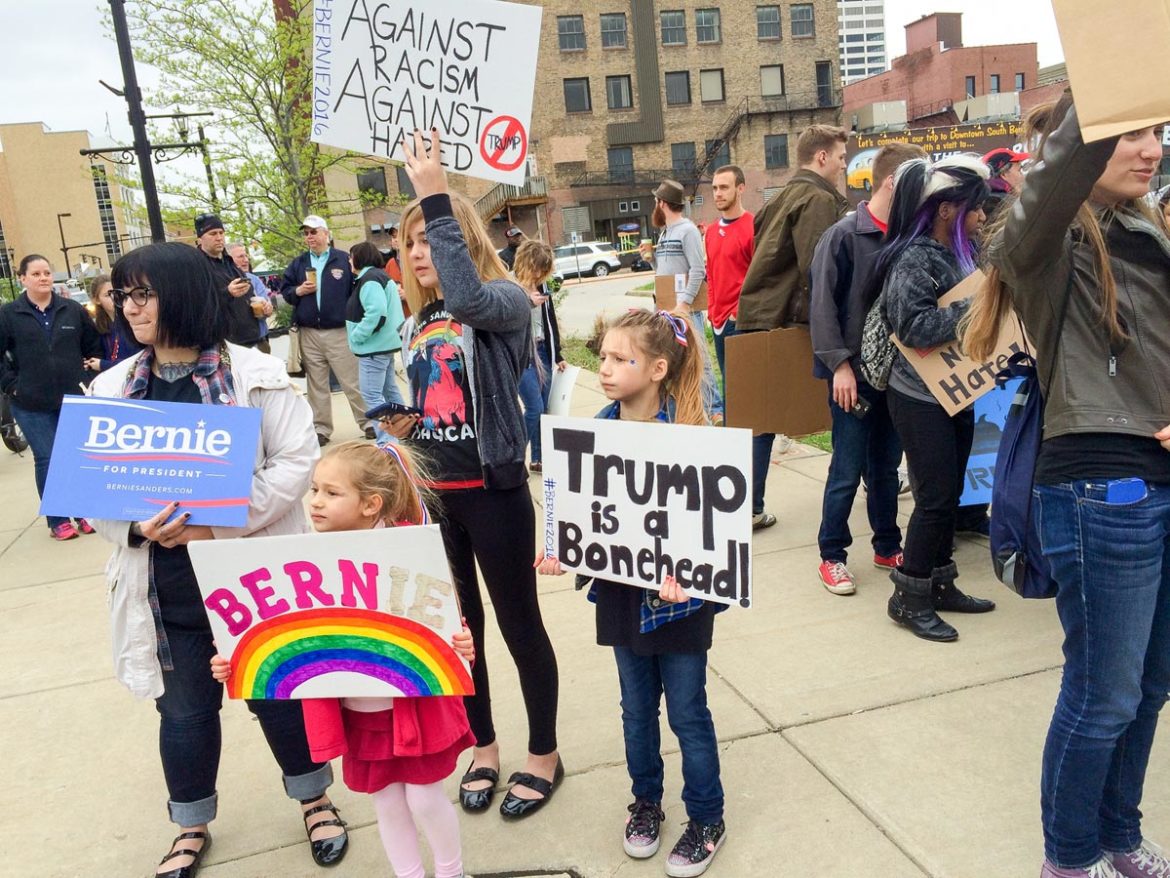 Carrier was often the only freelancer at these large news events. “The media comes in swarms.” Everyone but him worked for a corporation. “They were employed and professional. Someone was writing them a paycheck.”

But Carrier doesn’t work for anybody. “My job is to find out what is actually happening. I’m free to say what’s not being said and to figure out how to say what can’t be said.”

In 2016, he spent weeks talking to Trump supporters. He heard what others missed. “They told me immigrants are ‘coming over border like cockroaches.’ And Donald Trump won on that.” The other reporters rarely mixed with Trump people. “So they didn’t realize how strong their feelings were.”

Excerpt from “Surround the Whitehouse” (Home of the Brave):

“Politics is crazy. Reporters don’t have time to figure out the why. Corporate news is so far removed from reality. If you say what’s really happening and why, you sound like a crazy person.” Carrier quotes the late, great Charles Bowden, who, describing his frustration with accurately reporting stories for major magazines, said, “I was at a disadvantage: I was there.” 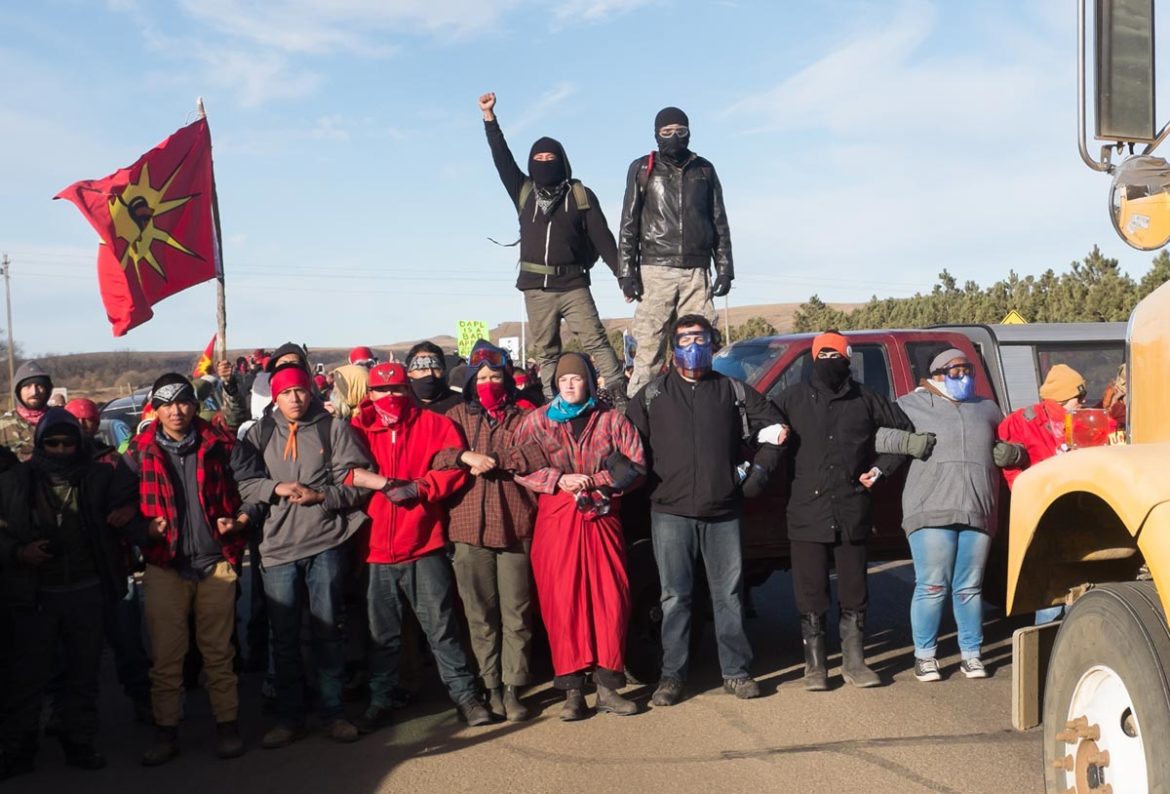 As for his own finances: “When I asked, people gave me money. If I attacked Trump every week, they’d give more. But I don’t want to play that role. I don’t want to think: ‘If I say this, or write this sentence, it’ll bring me more money.’ I didn’t want to do things just because they were popular.”

“Writers and producers shouldn’t have to deal with money,” Carrier says. They shouldn’t feel that “what you say depends on where your paycheck is coming from. They should be able to concentrate on what happened and why.”

“I did a year-end review podcast, to explain the money thing.” It brought in a lot of donations. “If I could have forced myself to ask for money more, I’d have a profit right now. I could take a break and still get paid.”

“One Year Review Meeting” (Home of the Brave):

Making a podcast, supported by listeners, taught him he has “a strong audience. It stretches around the world. I didn’t realize that.” He gets donation and emails daily. “Only one was negative” and kind of nasty. “I told him, ‘Please stay on your medication.’ He wrote back and apologized, then gave me money.”

“I’m out here all alone, trying to say things accurately.” The problem is: “When you work by yourself, you go crazy. If I say what I’m thinking I might lose my audience, because I might be losing my mind.” 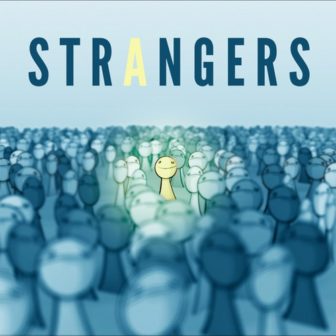 “Podcasters go crazy. When the story falls apart, your mind falls apart.” He points to Lea Tau, the host of Strangers. Like Carrier, Thau is a Peabody Award–winning public radio producer turned independent podcaster. And, like Carrier, she also became concerned with her mental condition.

Her episode “Hi” is a confessional: She asks for forgiveness after admitting to us that, to stay sane, she must slow down her podcasting schedule. 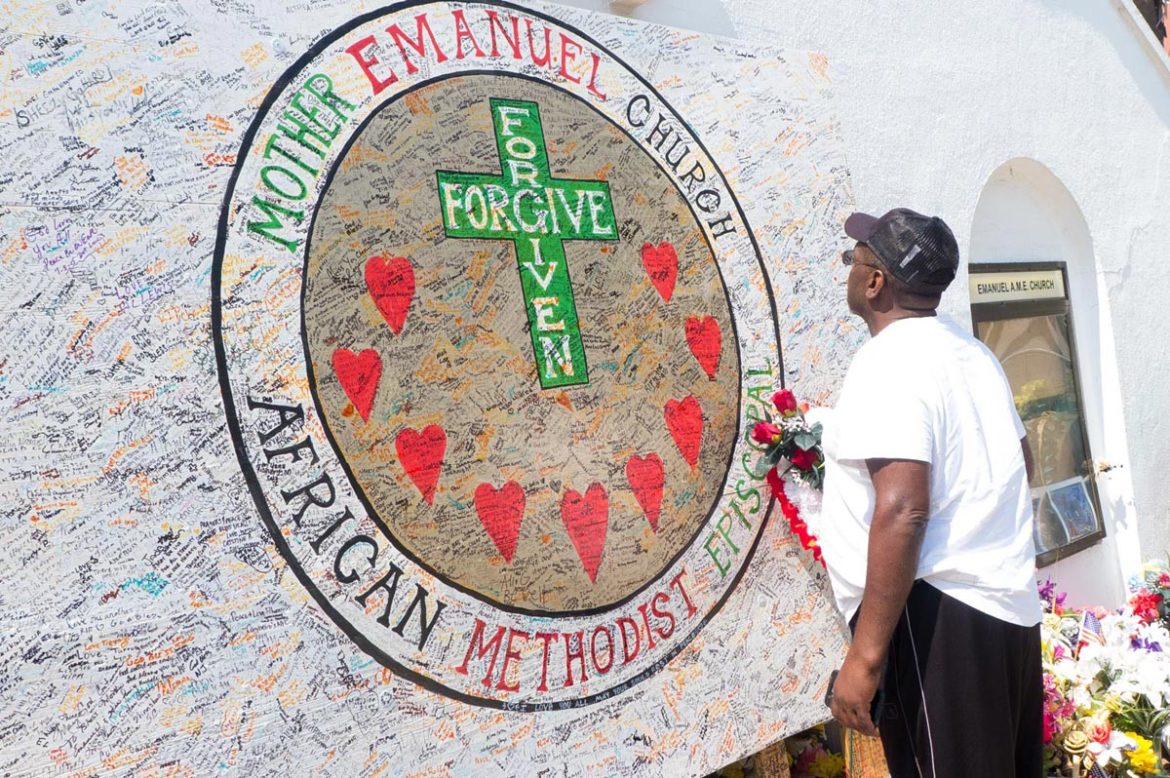 A board with signatures outside the Emanuel AME Church in Charleston, S.C., July 2015.

That’s how Carrier was feeling. He needed to “back out, take a break. The idea of a season in TV is brilliant.” You do 10 or 20 shows, then it’s over for the year, “not only for sanity but to re-examine what worked and what didn’t. You work hard, then you stop and take a look at it.”

For his podcast, he’s contemplating maybe “eight stories a year, a month and a half each, possibly working with established radio programs” to get a bigger audience.

A lot of people donate via subscriptions, paying a small fixed amount per month. When Carrier went on hiatus earlier this year, he canceled these monthly payments. Many subscribers wrote to say that wasn’t necessary: They would have gladly kept paying till he returned. And even now, months after his last episode, he continues to get new donations.

With the midterm elections coming, “October is a good time to get back in. I don’t know all the stories I’ll do. I’m not going to announce any in advance.” But he does know he’s built trust with his audience. “As long as I don’t lose trust, if I do good work, the money will come. The first thing is: Don’t worry about money, worry about the story.”