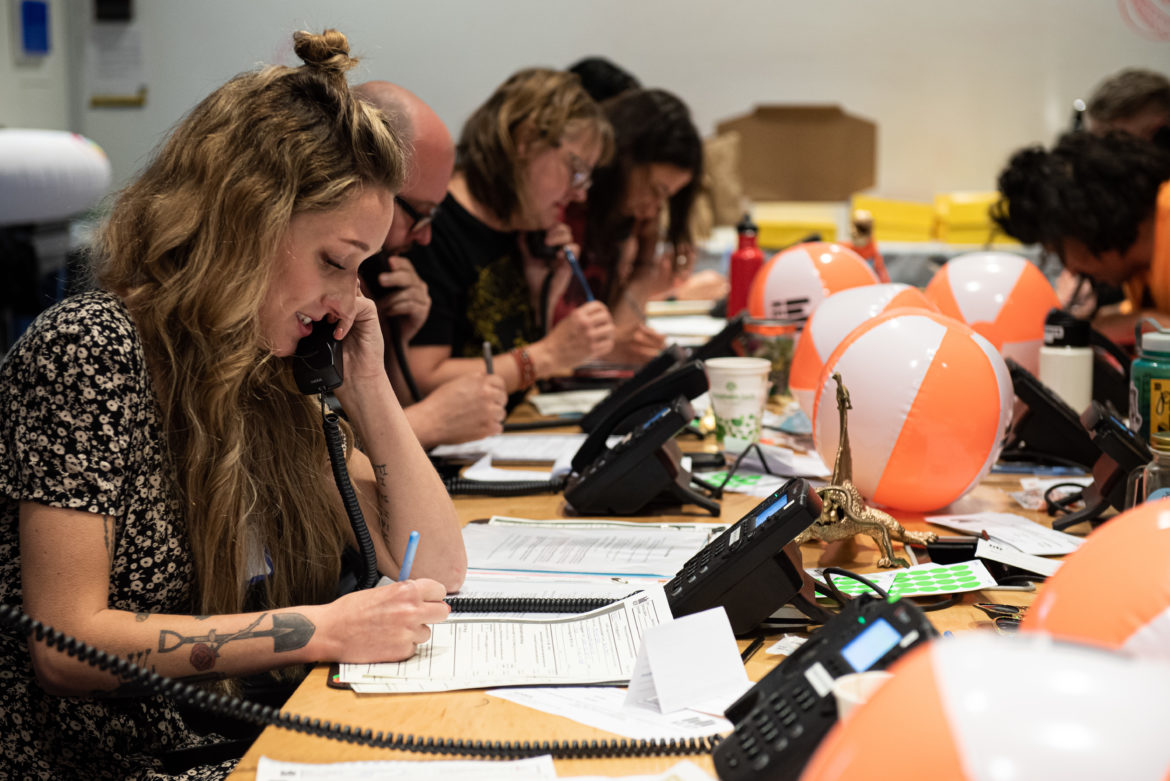 Volunteers for KEXP in Seattle take calls during a 2019 fund drive.

As confirmed COVID-19 cases increase throughout the U.S., public radio stations are rethinking how and whether to fundraise during the pandemic.

The public health crisis has caused some stations to preemptively postpone their spring fund drives. Others have abruptly ended drives as the risks posed by the outbreak worsened in their communities, allowing the stations to focus on newsgathering. One station in Seattle, one of the first hot spots of the outbreak in the U.S., proceeded with its drive by adjusting the tone of its messaging.

Turner originally decided to proceed with the drive because few cases of coronavirus had been reported in the local news as of earlier this week. But as the regional impact increased, it became clear WKSU needed to prioritize newsgathering, Turner said. Many of the staffers who are on-air during fund drives also are involved in news operations.

The decision to postpone the drive is a “very big risk” to the station, Turner said. WKSU must raise 22% of its membership revenue by June 30, the end of its fiscal year, or risk not making its budget. But there is no guarantee that the threats posed by the pandemic will make it easier to fundraise by then, she said.

Beyond fund drives, the station faces another “massive revenue vulnerability” because it receives a “substantial” portion of its underwriting revenues from other arts and culture organizations that buy sponsorships to promote local events, she said. But with the state prohibiting public gatherings larger than 100 people as of Thursday, that revenue is in jeopardy, Turner said.

“We’ve had half a dozen orders canceled in the last 48 hours and are bracing for more,” Turner said Thursday.

“We decided to shorten the drive in order to get essential news and information to our audience,” Turner said.

The station had been fundraising since March 4 and was scheduled to end its drive at the end of Thursday. Turner said the drive had been slower than expected, running about 25% behind projections. NHPR usually adds a contingency day to its pledge drive in case it doesn’t reach its fundraising goal. But under these circumstances the station will look to other fundraising sources to close the gap before its fiscal year ends, Turner said.

“We will look at all channels of fundraising to see if we can make up for not hitting goal,” Turner said. “Our June drive may be one place we might have an opportunity to make up some ground, but it is too early to say with certainty that will be the case.”

“March drives have been a longstanding revenue generator for us,” Turner said. But she said she’s hopeful that “listeners will be there for us financially when needed.”

WBUR in Boston, which had planned to start its spring fundraiser March 19, decided to postpone to a later date that has not been announced.

“We want to focus on providing uninterrupted service to our audience during this challenging time,” CEO Margaret Low said in a Monday email to staff.

The station has also canceled events in CitySpace, its events space, through the end of the month.

KNKX in Tacoma, Wash., also postponed its spring fund drive “to give our reporting team the time they need for COVID19 coverage,” the station said in a tweet Thursday.

Melanie Coulson, executive director for member station services at Greater Public, said that she is advising stations in markets that are hardest hit by the virus to postpone their drives.

For station leaders who believe they need to move forward with a drive — whether for budgetary reasons or because of a seasonal audience — she suggests paying close attention to audience feedback. They should adjust messaging and consider postponing the drive if fundraising pitches aren’t sitting well with listeners.

Fundraising consultants Barry Nelson and Mike Wallace recommend that stations that opt to proceed with fund drives remain flexible enough to “pivot to fit the needs of the listener by putting news first.” They co-wrote a commentary posted March 16 by Contributor Development Partnership, the Boston-based fundraising group.

“As more schools shut down and switch to online learning, as more workers are asked to telecommute, there will be more at-home listening and a greater need to stay informed on an hourly basis,” they wrote. “In short, a greater opportunity to demonstrate your station’s public service commitment.”

Nelson and Wallace advise news stations to timeshift pledge breaks to avoid pitching next to coronavirus stories and to forward-promote updates to news stories yet to come in the program. They suggest that music stations emphasize how coronavirus is affecting local arts organizations and describe how their stations support these organizations year-round. All stations should avoid transactional pitches for pledge premiums and drawings, and evaluate any offers for event tickets or travel offers, they wrote.

Nelson and Wallace created a collection of fundraising resources — including radio scripts for different scenarios and tips for producing news-responsive on-air drives — available to all stations. Their COVID-19 response web page for CDP also provides links to online resources of other public radio membership organizations, including Greater Public.

The crisis has highlighted the importance of sustaining giving programs at stations, Coulson said. Stations with strong programs have more flexibility to postpone a drive in case of an emergency.

‘It was a risk to delay’

One station that moved forward with its fund drive is KEXP in Seattle. The Triple A music station started the on-air portion of its drive March 6 but created contingency plans to postpone it if the campaign didn’t go well.

Those plans turned out to be unnecessary because listeners supported the drive, said Betsy Troutman, director of development. Listeners have been sending messages that say “We understand that the drive is a necessary part of keeping KEXP around and we’re proud to participate” and “You’re part of our community,” Troutman said. As the drive entered its final day Friday, KEXP had raised 90% of its goal, according to its website.

“The audience was responding really positively,” Troutman said. “We didn’t get any negative feedback, and we were hitting goals overall.”

KEXP did change the tone of its messaging midway through the drive, Troutman said. Instead of “funny drive stuff” and spots that got “really amped up,” the on-air pitching became “very calm and very matter-of-fact.” During pledge breaks, announcers focused on “our mission and our place in the community and the need to fundraise not only for our organization but other nonprofits in town.”

In weighing the decision to proceed with KEXP’s drive, “we knew it was a risk to go forward,” Troutman said. “We also knew it was a risk to delay it, because what happens if in a month or three weeks things are worse than they are now?” In the event of an economic recession, all categories of fundraising could be affected, she said.

For station leaders who are still deciding whether to move forward with a fund drive, Troutmancautions them to be “flexible and thoughtful and be aware of the interactions between your on-air host and your audience.”

“Do what feels right for your organization and your audience,” Troutman said. “And if you keep those two in the forefront, then no matter what decision you make, it will be the right one.”

Update: This article has been updated to include information from the commentary that Nelson and Wallace wrote for CDP.