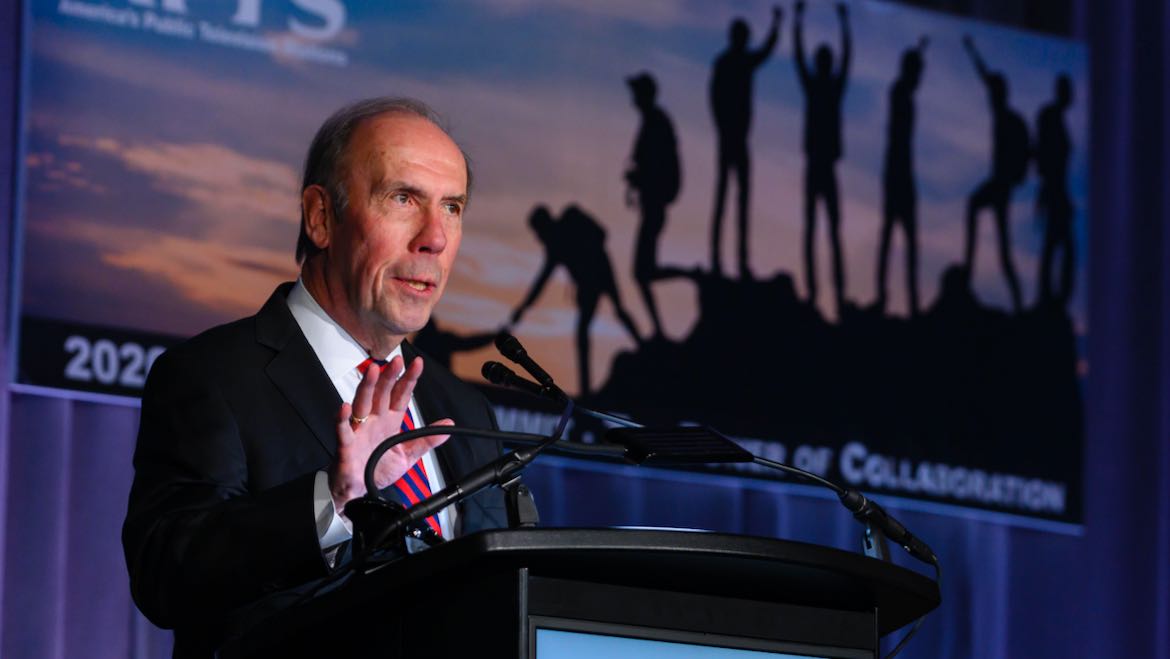 “Today’s technology makes it possible for us to reduce earthquake warnings from 30 seconds to less than two seconds or chart the route to safety from a tornado or hurricane or a flood,” Butler said. “Tomorrow’s technology, the Next Gen broadcast standard, with its advances in mobility and interactivity, will make it possible for us to send such critical information to everyone with a cellphone equipped with a Next Gen chip.”

As part of its annual appropriation request to Congress, CPB is seeking funds from DHS for the first time. It has proposed creating the Next Generation Resilient Warning System, a competitive grant program for public broadcasters within DHS’ Federal Emergency Management Agency Federal Assistance account.

If set aside, the $20 million would allow stations “to procure, construct and improve transmission and other public safety related equipment, software and services, including ATSC 3.0, datacasting and MetaPub,” CPB said in a Feb. 10 document submitted to Congress. “This will result in enhanced alerting and warning capabilities that serve all Americans.”

After the 9/11 terrorist attacks, CPB began investing in local station capacity to assist emergency service providers. Since 2013, public television has been a partner in a Wireless Emergency Alerts system, with stations providing emergency messages over their transmitters. CPB said in its request that the NGRWS grant program would leverage this existing infrastructure to enhance and expand public safety services.

Butler said APTS will make a case to legislators that “this may be the best investment Congress has ever spent on public safety.” He added that it would also help stations upgrade infrastructure.

“Since Congress eliminated the $20 million Public Telecommunications Facilities Program, or PTFP, in 2010, public media has been without any consistent source of funding for upgrades and replacement of critical infrastructure,” he said. “After 10 years of making do or doing without, that situation needs to change.”

CPB is also seeking $515 million for its annual appropriation in FY2023, a $50 million increase over the amount secured for FY22, as well as level funding for interconnection at $20 million in FY21 and an increase for Ready To Learn from $29 million to $30 million.

Competition for all federal programs remains high, Butler said, especially considering political clashes and the growing federal budget deficit. Yet he said he is hopeful that CPB will receive another funding increase.

“Holding our own over the past 10 years while dozens of other programs have been decimated or eliminated has been a remarkable achievement,” he said. “And getting a $20 million increase last year was little short of miraculous.”

Summit attendees will meet with representatives in Congress Wednesday. Butler said he’s heard from congressional leaders that such meetings play a critical role in securing funding increases and bipartisan support for public media. He said it is particularly important to do so this year as President Trump again seeks to zero out public media funding.

“Lawmakers unanimously tell us that these station visits are the most impressive and persuasive experience they have with you,” Butler said. “And the more of those visits you organize, now and forever, the better for our cause.”

“While our focus this week is on Washington, we should understand that funding from state governments also represents a large and growing source of financial support for public media,” Butler added. Public broadcasting lost $100 million in state support “in real dollars” after the 2008 recession, Butler said, “and we’re almost back to where we were before the roof fell in. We’re committed to getting it all back and increasing the number of states that fund our work and growing state funding $100 million more over the next 10 years.”