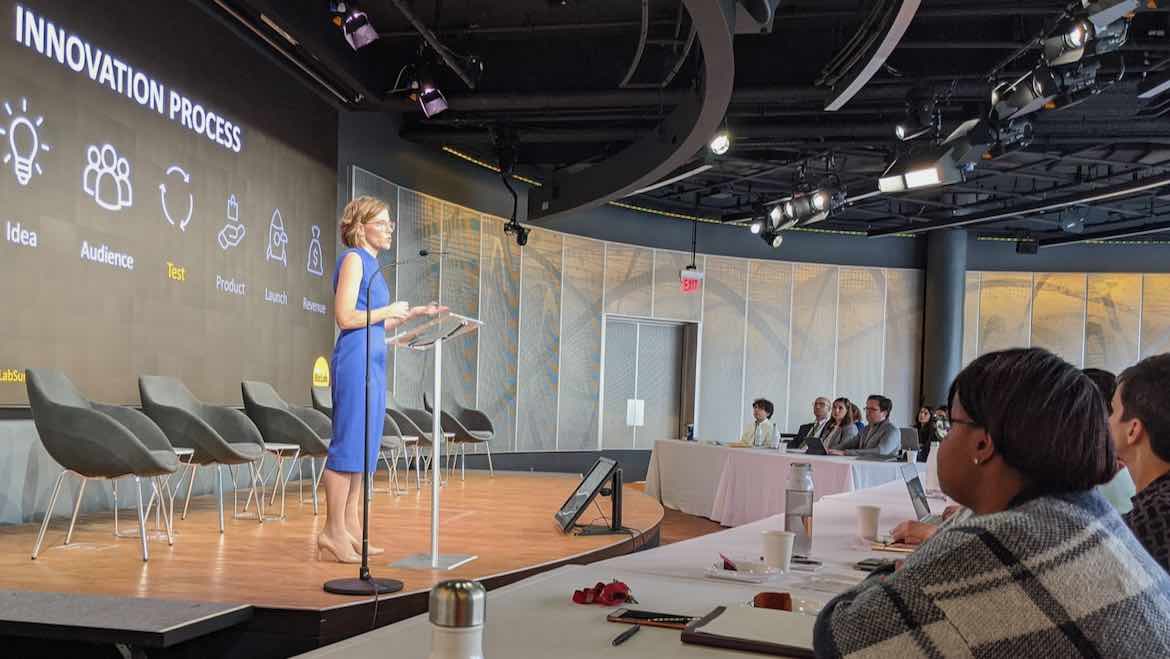 BOSTON — Less than a year into its work with six public radio stations, WBUR’s BizLab was able to boast of projects generating nearly $83,000 in new revenue at a sold-out summit Tuesday.

“Our mission is to benefit all of the system,” BizLab Executive Director Joan DiMicco told more than 90 attendees from across the country at the all-day conference held at WBUR’s CitySpace event center. With funding from CPB and the Knight Foundation, the BizLab team has been working with stations on projects aimed at boosting membership and sponsorship revenue.

The model for the pilot projects was “fail fast,” DiMicco said.

During six months of intensive coaching from Bloomer and other BizLab staffers, each station was able to conduct market research to test its ideas, then launch its project and test early results with the help of a BizLab data analyst.

For Capital Public Radio in Sacramento, Calif., the challenge was jump-starting stalled revenue from state capitol coverage it has been distributing to 50 public radio stations statewide since 2012. The daily reports include 15 seconds of underwriting that CapRadio can sell, but that income dried up after a corporate sponsor dropped out.

Kelly Morrison, CapRadio underwriting specialist, said the BizLab project started with a review of the contracts with each affiliate station and a research project that determined underwriters were more interested in buying regional packages than full statewide coverage.

Armed with that information and a better understanding of how to manage its underwriting inventory, CapRadio’s team is now selling underwriting in three California regions and projecting new revenue of over $100,000 in 2020 for its refreshed capitol coverage network, which doesn’t have a name yet.

In Detroit, WDET’s location at Wayne State University in the city’s booming Midtown section presented its underwriting staff with a challenge: As the neighborhood grew, small businesses were blossoming, with owners and customers who were in WDET’s target demographics. But the owners lacked marketing budgets for a full radio underwriting campaign.

“We literally walked outside, and within three or four blocks we had dozens of businesses,” he said. WDET’s research found those businesses only had a few hundred dollars to spend on marketing each month, using it mostly for self-generated social media campaigns. Working with the BizLab team, WDET created a pilot project to promote those businesses on the station’s own Facebook and Instagram feeds.

“We solicited a few local businesses to say, ‘Do you want to be our guinea pigs?,’” he said, using them in a series of tests to see what combination of photos, copy and filtering of marketing targets would be most likely to produce results.

Building new digital brands — and a new membership base

While underwriting support was at the core of several BizLab projects, others focused on building listener support for new and existing forms of editorial content.

WAMU in Washington, D.C., was one of three public radio stations that acquired the “-ist” local news sites that had been shut down by former owner DNAinfo in 2017. While WAMU and its new DCist acquisition both had well-established brands, membership coordinator Maddie Poore said the challenge was to learn how DCist readers perceived that site’s brand and how to turn them from readers into paying members.

Starting with a list of donors to a Kickstarter campaign that helped revive DCist, the site invited more than 150 loyal readers to a Valentine’s Day event where they wrote “love letters” to the site. That stealth research project led to a beta membership program with a goal of 500 founding members by the end of 2019. As of Tuesday, Poore said DCist was almost there, with $6,500 raised from 427 sustaining members, each paying an average of $129 per year.

In Kentucky, Louisville Public Media acquired a formerly commercially-run events listing site, Do502, in 2017, bringing with it a new audience but also the challenge of incorporating a digital-only property into a business that had been focused on running three radio stations.  “Our issue was incorporating Do502 into the LPM family,” said Tracy Karem, corporate marketing representative.

Working with the BizLab team, Do502 surveyed audiences at LPM donor lunches and “live lunch” music events held by LPM. Karem said the research showed that a large part of Do502’s audience did not overlap with the listener base of LPM’s three radio outlets. Instead, LPM found a new audience specific to Do502, which it is now reaching through Do502-specific events where it pitches membership exclusive to the Do502 site. Membership to the site grew sixfold from the start of its BizLab project in April to December.

Not all of the BizLab projects involved new media. As many public radio stations work to expand their newsrooms amid growing media consolidation, two participants focused on bringing their existing news content to more eyes and ears.

For Miami’s WLRN and its fundraising affiliate, Friends of WLRN, that meant working together to better promote environmental reporting from WLRN’s newsroom. “We knew that we wanted to focus on climate change and the environment, because our region is affected by that issue in every aspect of our lives,” said Giselle Reid, director of strategic initiatives for Friends of WLRN.

The BizLab project created a weekly newsletter focused on coverage of climate change. Through testing on a beta group of 120 subscribers and then 17,000 readers in a second phase, WLRN moved to a new email and subscription platform and boosted the newsletter to an open rate of 30% and a clickthrough rate of up to 3%. Reid said plans to generate revenue from the newsletter are just beginning.

At Vermont Public Radio, the focus was on Windham County in the southwestern corner of the state, an area where research had shown listeners felt distanced from the statewide network’s base in Colchester several hours away. Despite having a reporter, Howard Weiss-Tisman, based in southwestern Vermont and a satellite studio in Windham County’s largest city, Brattleboro, “there was a disconnect between what we were providing and what the perception was,” said Michelle Owens, VPR director of marketing and engagement.

VPR had already been conducting statewide research on how to better serve all corners of Vermont, but BizLab helped refine that research, Owens said. Data analysis by BizLab’s Ted Fuller showed that listeners in southern Vermont were particularly heavy users of Facebook.

“We had to use our existing reporters,” Owens said. “We couldn’t hire anyone new or change editorial content.” So the BizLab project focused on developing a new newsletter specifically highlighting Weiss-Tisman’s stories from Brattleboro and vicinity. Each newsletter went out with a survey, which created audience interest in events featuring Weiss-Tisman and even generated story ideas for him to pursue.

Though VPR’s project began only in August, Owens said early results from a one-day membership drive already showed more growth in Windham County than in several control counties elsewhere in the state.

For several of the BizLab stations, the project included careful consideration of editorial boundaries within their organizations.

At WDET, the initial push to include sponsored content promoting local businesses on the station’s Facebook and Instagram accounts met with resistance from the newsroom. In retrospect, Tabaczynski said, the newsroom should have been involved sooner. “They forced us to go back and rethink things for the better,” he said.

VPR’s Weiss-Tisman said the BizLab team did not interfere with his editorial decisions. During a discussion of editorial integrity, Weiss-Tisman pushed back on the use of the word “firewall” to describe the boundaries between his work and the BizLab project. If there had been pressure to avoid reporting on a donor, for instance, Weiss-Tisman said a firewall would have been needed. “All [BizLab] was doing was trying to get my work out to more people,” he said.

At WLRN, “the firewall was very thick” between the newsroom and the separate Friends of WLRN organization, said Reid. “This was actually the first project where we were able to work together editorially.”

While no content has changed at WLRN, the BizLab project did change some schedules. Because the newsletter comes out on Fridays, “I’ve actually encouraged our digital director to push content out sooner so I can put it in,” said Katie Lepri, WLRN engagement producer.

At DCist, “we’re a distinctive editorial team unto ourselves,” said editor in chief Rachel Sadon. Its BizLab membership engagement project required DCist and WAMU staffers to learn more about how audiences perceived each brand. While WAMU’s broadcast audience skewed older, as expected, Sadon said the digital audiences for both sites shared similar demographics. Even so, the focus for now is on building a new membership model exclusive to DCist.

“Down the line there’s an opportunity we see for a super-member, someone who’s a member of both, but for now it’s a different product and people either understand that implicitly or explicitly,” she said.

After lunch and a keynote address and leadership messaging workshop from brand strategist Tamsen Webster, the conference turned to other new revenue sources. Representatives from WLRN, WBUR and San Francisco’s KALW discussed their work on text-messaging projects to lure new members and bring lapsed members into the fold. A concluding session with representatives from New Hampshire Public Radio, KUOW Seattle, Glow.fm and PRX focused on best strategies for soliciting donations from podcast listeners.

Many of BizLab’s next steps will depend on what happens in WBUR’s executive offices, two stories above CitySpace, DiMicco said. The project started under former WBUR CEO Charlie Kravetz and now awaits the arrival of his successor, Margaret Low, who starts work in January. DiMicco said she’s hopeful Low’s recent work developing new revenue sources at Atlantic Media will lead to continued support for new BizLab projects.

In the meantime, BizLab will continue working on the projects at VPR and CapRadio. Funding from CPB and Knight is in place for two years of follow-up work studying the results of all six pilot projects as they move into more permanent forms.

DiMicco hopes the station representatives that attended BizLab as observers left with not just case studies but a better understanding of how “lightweight” innovation can work in public radio. “The process of product launches is well-established,” she said. “I hope people walk away with a strong foundation of what does it mean to create a new revenue stream.”

Correction: An earlier version of this article gave an incorrect title for Sarah Bloomer. It is experience strategist, not experiment strategist.