In the months since public radio resuscitated three popular local news websites, the stations that took on the Gothamist outlets are figuring out how to capitalize on their new digital presences.

So far, WNYC in New York, KPCC in Los Angeles and WAMU in Washington, D.C., have absorbed their “-ist” sites to varying degrees. KPCC restructured its workflow and content strategy to account for the arrival of LAist.com. Meanwhile, at WNYC and WAMU, the Gothamist and DCist properties are supplementing the stations’ journalism with hyperlocal coverage and a voice suited to social media.

The approaches vary, but the goals are similar: to pursue a wider, younger audience with a local digital presence that sets them apart in their markets.

The organizations announced the acquisitions in February after billionaire owner Joe Ricketts abruptly shut down all sites in the Gothamist company when staff voted to unionize. WNYC led the effort to purchase the portfolio in partnership with WAMU and KPCC. (Chicago’s WBEZ and San Francisco’s KQED turned down the chance to acquire Chicagoist and SFist.)

The sites already had enviable audiences. KPCC reported in February that LAist drew 776,000 visitors in October 2017, the month prior to its shutdown. KPCC.org drew 689,000 visitors that month. At the time of purchase, DCist had “a loyal fan base” of more than 700,000 readers and more than 400,000 followers across social media channels, according to WAMU. (WNYC declined to share audience data.)

By adding the “-ist” sites to their offerings, the public radio stations are venturing into a different tone. Before they went defunct, the Gothamist sites emphasized charismatic, quirky content, with listicles and shareable headlines like “Here Are 16 Of The Best Places for a First Date in D.C.” and “Photos: New Yorkers Vie For The Title Of Miss Subways 2017.” Those appeared alongside recurring staples like LAist’s weekly events rundown and DCist’s monthly Your Sh!tty D.C. Horoscope.

The shift in voice, digital-first following and hyperlocal focus of each Gothamist site gives the acquiring stations a chance to boost their value on non-broadcast platforms — a point emphasized by KPCC Chief Content Officer Kristen Muller.

“As great as NPR is, it’s not going to substitute for serving targeted audiences in your city,” Muller said during a session at the Public Radio Program Directors conference in August. “You’ll have to make that choice on digital sometime.”

KPCC didn’t begin updating LAist until more than four months after the acquisition was announced, but things were anything but quiet behind the scenes.

The purchase significantly expanded KPCC’s digital presence, more than doubling its Facebook following and multiplying its Twitter followers sevenfold, though there may be overlap between the KPCC and LAist social audiences. KPCC also added 30,000 email addresses to its database, almost all of them new to the station.

KPCC’s Muller confirmed that her station purchased LAist for around $50,000, which KPCC CEO Bill Davis called “a bargain.” (WAMU paid under $100,000 for DCist, according to a spokesperson; a WNYC spokesperson declined to disclose an amount for Gothamist, citing confidentiality.)

KPCC’s leaders felt that they should make changes to integrate LAist into the station. “Almost from the very start, we knew we wanted to go all-in on LAist.com,” said Lisa Brenner, LAist’s associate editor. This led to a reorganization of LAist’s editorial workflow and of various reporter and digital media roles — some positions were shifted to new hours of work, while others were entirely reassigned. 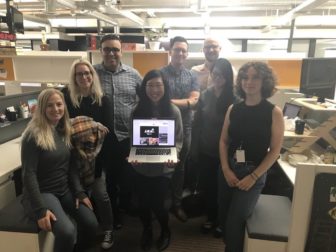 The LAist team on launch day.

KPCC.org will now focus on the unified newsroom’s audio and broadcast streaming, serving as a “listening companion,” said senior digital editor Melissa Leu. Meanwhile, LAist will feature digital-first visual, text and multimedia content. On-air promos for digital content now point listeners to LAist, as does much of KPCC’s social media. Visitors will notice changes to the websites throughout the next year.

Some reporters resisted the changes. For instance, “no matter how much we showed them that no one was clicking on their audio stories, they insisted that we put an audio button on LAist,” Muller said during a session for news/talk stations at the Public Radio Program Directors conference in August. (They lost that battle: LAist will have no audio button.) Brenner described internal morale as “a healthy mix of enthusiasm and skepticism.”

LAist’s team now includes nine people plus an intern and freelancers, but the entire KPCC newsroom contributes content. LAist will include the bylines of KPCC staffers, including reporters and show producers, and editors will determine in joint daily meetings which articles will be cross-posted. The top LAist post, senior editor, reports to Muller.

Acquiring LAist has allowed KPCC to expand its hyperlocal content, Muller said by email, by “serving audiences that are defined by geographies, possibly at the neighborhood level.” That was previously difficult for the station, with a broadcast area of 18 million people. As Muller sees it, broadcast distribution enables fleeting moments across a broad audience with serendipitous content; digital distribution reaches more targeted audiences at different times with content that’s self-selected.

Since relaunch, LAist has added coverage of food as well as Dear LAist, a series that uses Hearken to gather and answer reader questions. KPCC may also pilot an LAist newsletter briefing this year, Muller said.

LAist is changing KPCC’s audience and how the station interacts with it. According to Google Analytics data, about 55 percent of KPCC.org visitors in August were under the age of 45; 61 percent of LAist.com readers were in that group. (Pre-shutdown in October 2017, 72 percent of LAist’s audience was under 45.)

At the time of the PRPD conference, LAist stories were averaging 19,000 unique pageviews a day, nearly 30 percent higher than the average KPCC story, and a 69 percent higher engaged time.

“We’re not going for viral hits,” Muller said. “We’re going for users that come back at least three times a month — that’s our metric of success — and engaged time.”

While KPCC is realigning its operations around LAist, both WNYC and WAMU are for the most part treating their “-ist” properties as supplementary units.

“We’re watching how people in New York respond to our tests of bringing WNYC journalism to Gothamist, Gothamist journalism to WNYC, and our joint efforts to both brands’ platforms,” said Jim Schachter, WNYC’s VP for News.

Post-acquisition, Schachter considers a few cross-team collaborations to be successes. They released a joint multiplatform investigation of tax assessments at Gramercy Park, which originated with Gothamist City Editor Christopher Robbins and expanded to include Lylla Younes, data reporter on WNYC’s DataNews team. WNYC will also revive We The Commuters, a collaborative project it had worked on with Gothamist before the acquisition, and it is planning collaborative election coverage for the fall. Gothamist is also developing its first original podcast under the WNYC Studios banner.

As with the other acquired sites, Gothamist sets itself apart from WNYC with its distinct tone. “Gothamist focuses on text and visuals, and it has had a tarter voice than WNYC’s,” said Schachter. “WNYC historically has focused on audio and has had a more straight-ahead ‘newsy’ tone of voice.” 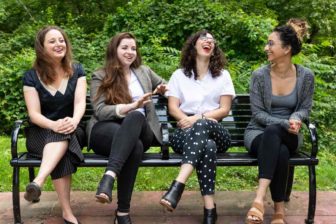 Like WNYC, WAMU will maintain independent editorial teams for its own newsroom and DCist. Little is changing about DCist post-acquisition. “We haven’t really wanted to do much altering or tweaking of what’s there; rather, just to build on it,” said WAMU Chief Content Officer Andi McDaniel. (Disclosure: I have worked with McDaniel and WAMU in my capacity at PRX.)

WAMU and DCist are now promoting each others’ work. DCist reporters have filed spots for WAMU newscasts since their first day back. WAMU and DCist share each others’ work on their social media accounts. And the sites repurpose each others’ content, with variations depending on audience. For instance: a Sept 13 article originated on WAMU as “D.C. Region Likely To Dodge The Worst of Hurricane Florence“ was repurposed with a more conversational tone for DCist, under the original author’s byline, as “D.C. Will Probably Dodge The Worst Of The Hurricane.”

Beyond ongoing conversations over Slack, these spots and collaborations are primarily determined in daily station-wide editorial meetings and a daily content leadership stand-up. DCist has a team of four, with its editor-in-chief reporting to McDaniel.

Like LAist, DCist has brought in a younger audience. Google Analytics data show that nearly half of DCist.com readership in August was under 35; another 25 percent was from 35–44 years old. (Measurements of WAMU.org’s audience were “unavailable,” according to a spokesperson.)

Building from a successful Kickstarter — all of the stations launched crowdfunding campaigns for their new acquisitions — WAMU is exploring a DCist-specific “extension” of a WAMU membership or a discrete DCist membership. The station is also exploring DCist-branded events.

It's so great to see so many happy faces at this @DCist launch party. Feels like we are expanding our #publicradio family! pic.twitter.com/B7IAhPceCq

“We don’t expect it to be self-sustaining in the first year, but we expect the revenue to be a mix of underwriting and membership,” McDaniel said.

All stations can learn from the acquisition strategy that brought the Gothamist sites into public media, McDaniel said. “Public media has an opportunity to fill the void that is being left by the retreat of local news organizations across the country,” she said. “And I have to think that opportunity exists in a lot of places.”