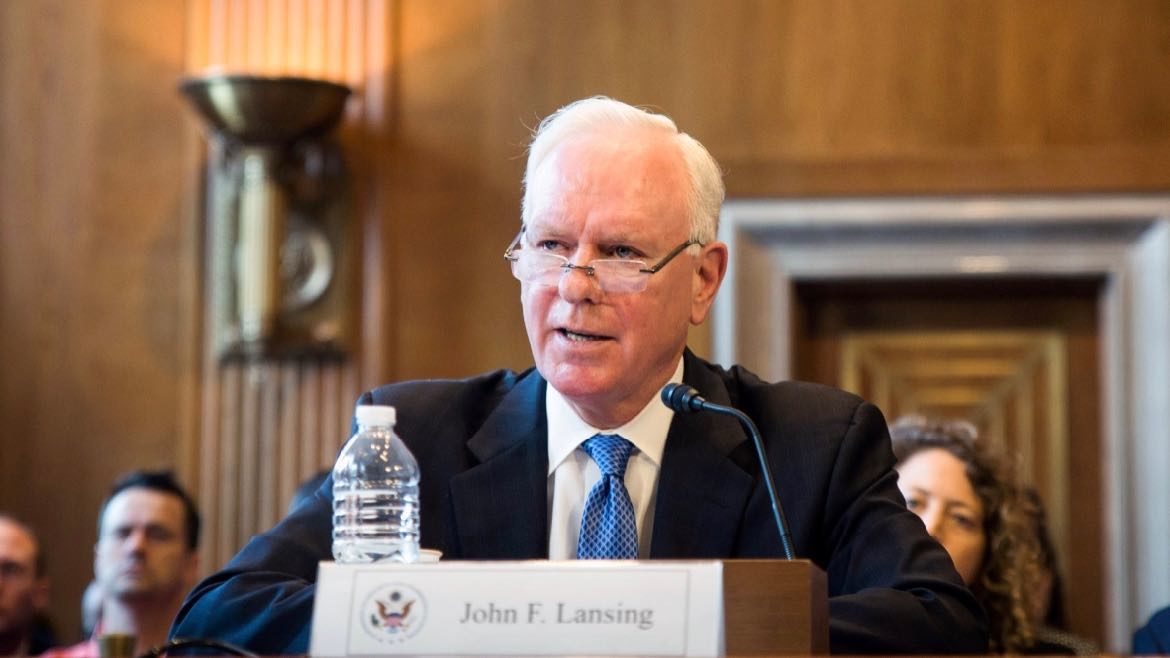 John Lansing speaks in September 2017 before the U.S. Helsinki Commission.

NPR announced Thursday that its board has chosen media executive John Lansing as the network’s next president and CEO.

Lansing begins in October. He succeeds Jarl Mohn, who announced in December that he would step down this year after leading the organization for five years. Mohn will serve as president emeritus and co-chair a 50th-anniversary capital campaign for NPR.

Lansing most recently held the position of CEO of the U.S. Agency for Global Media, which operates broadcasters such as Voice of America and Radio Free Europe. He was also president of Scripps Networks, overseeing cable networks such as Food Network and HGTV from 2005 to 2013.

Lansing’s background shares some similarities with that of former NPR President Kevin Klose, who was director of U.S. international broadcasting before leading the network from 1998–2008.

Klose told Current that “there were great advantages” to moving from his position at the U.S. Information Agency to NPR. As president of Radio Free Europe/Radio Liberty, Klose worked with Lansing in 2013 and 2014. Lansing is a “smart, savvy, highly experienced senior news executive,” Klose said.

“He will be perfect for NPR,” Klose told Current.

Station leaders also shared positive remarks about the new CEO. The U.S. Agency for Global Media “has some similarities to public media,” said Steve Bass, CEO of Oregon Public Broadcasting, and Lansing has “led a significant journalistic organization that is continually pressured in various ways. That’s a plus.”

Goli Sheikholeslami, who led the search committee for the CEO job as vice-chair of NPR’s board, told NPR’s David Folkenflik that “in terms of mission, understanding of media, the depth of experience, his strategic leadership, his commitment to people and culture, I would say those were really the key things that we were looking for.”

“We are delighted to welcome John, whose deep experience as a media industry executive and practicing journalist make him ideally suited to lead NPR into its next chapter,” said Paul Haaga, Chair of the NPR board, in a press release. “He is a listener and a collaborative leader with a passion for our public service journalistic mission who will help us continue to expand the audience for our storytelling.”

The search committee had hired Russell Reynolds Associates to assist with the process, Haaga said during an NPR board meeting in May. During the months-long process, search committee members and Russell Reynolds met with NPR staff, a peer anti-harassment group at NPR, and representatives from CPB and PBS about “NPR’s current needs and the qualifications needed to lead NPR in the future,” according to the minutes of the meeting. The firm also conducted an online staff survey.