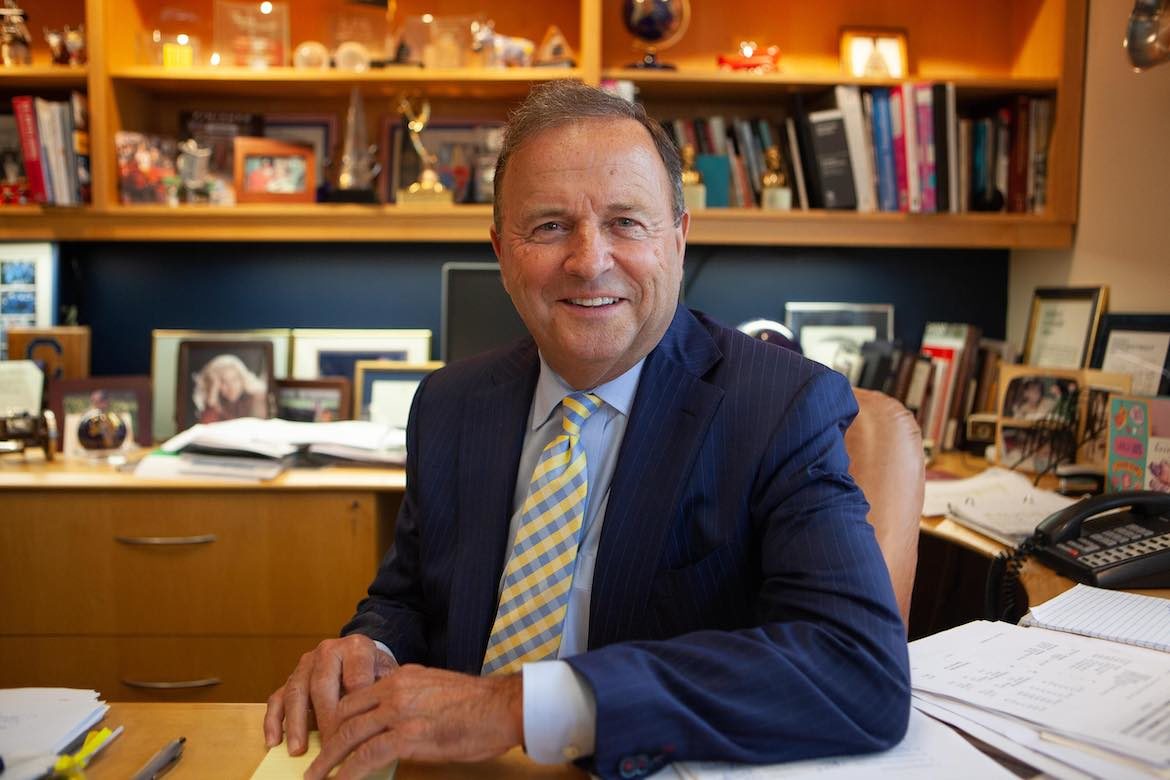 Jerry Franklin grew up on a farm in the 1950s in a home without a television, but he says when he was 5 years old he knew that he wanted to be on TV. His mom made a television set out of a cardboard box; after supper, they would “watch TV” as he narrated stories from a scroll of brown butcher paper in front of the screen.

His high school speech teacher suggested a career in broadcasting. Jerry did media production in the U.S. Air Force. In 1985, he became the president of joint licensee Connecticut Public, a post he held for 34 years.

“It would be a better story had I worked my way up the ladder from the mailroom,” Jerry said by phone. “My mentors told me, ‘Come to Connecticut and stay there for three or four years, then for your next job you’ll go to Philadelphia. But it didn’t work out that way.”

“I had a terrific board of directors, and we kept reinventing ourselves,” he said. “We found a home here in Connecticut.”

If you or your kids loved Barney the purple dinosaur, then thank Jerry Franklin and Connecticut Public for bringing him to PBS. If, like me, you found Barney to be a unique form of torture, don’t hold it against Jerry. It’s only one of his many accomplishments in a pubmedia career spanning 3 1/2 decades, which ends this month with Franklin’s retirement.

Read more about that career and Jerry’s thoughts on the state of public media in this Exit Interview, our series of interviews with longtime public media leaders retiring this year.

Julie Drizin, Current: What do you consider your single most important accomplishment?

Jerry Franklin: I would say securing our $47 million endowment. Twenty years ago, we really struggled. I didn’t know how I was going to meet next month’s payroll. That really stuck with me for years. A company shouldn’t have to go through this. About 10 years ago, we started an endowment. Now that we’ve secured $47 million for the endowment, no one else will have to worry about meeting the next payroll.

What’s the funniest thing that happened in your years at Connecticut Public?

We were always big with creating partnerships, bringing volunteers into the building and dealing with young people. One day, we had two groups coming in. One was a group of teenagers who had been incarcerated and were on a work-release program; the other was a group of honor-society teenagers coming to spend a day in a mentoring program.

The two groups arrived at about the same time in the lobby, so the receptionist called the head of volunteers — a new person — to come greet them.

The teenagers on work release were supposed to work in our flower gardens and grounds for the day, and the honor society group was supposed to go to the development department and work with membership and underwriting, etc. But, the two groups got reversed.

About 90 minutes into this, the head of volunteers realized the mistake. She came running up to my office in a panic. We laughed, and I asked, “Well, has anyone complained?” She said, “No.” I said “Let’s give them another hour before we switch them.”

A little before noon we switched them up. The work-release group went downstairs to plant grass and flowers, and the honor society came up to the development office. It was funny, but it worked out. It was kind of a lesson for us all.

What key message or advice do you have for people entering public media today?

What do you wish you understood before becoming a CEO in public media?

I wish I’d understood the significance of motivating people. For a very long time, I assumed that everybody was as hungry as I was. Eventually, I discovered that they’re not.

I also wish that I had developed an appreciation for the voices of people on the fringe. I was raised in an environment where reaching the middle was easy. But the real excitement is on the fringes. To make a difference, sometimes you’ve got to be comfortable dealing with the fringes of the issue.

You talked about the importance of learning how to fail quickly, and that’s a new idea, coming from the tech world in Silicon Valley. But it isn’t part of the public media culture. In fact, there’s a resistance to failure, and some of that resistance comes from fear about what it will mean for CPB funding. Everything seems so volatile. So, give an example of a failure of yours and what you learned from that.

We knew we had a golden goose and a ratings bonanza with broadcasts of the University of Connecticut’s women’s basketball games. It was the highest-rated local public television series in the nation, and this is Connecticut, where we are crazy fanatical about women’s sports.” I said, “Let’s ratchet it down and create a high school sports network.” We went to the CBS affiliate here in Connecticut and did a joint, for-profit venture. We were convinced this was going to be a success. We were going to make money. It was a total failure.

That’s when I said, “If we embark on new projects, we’ve got to have the courage to get out before we lose a lot of money.” We got to figure out how to lose a little bit of money as you fail, so you can spring back to your feet and start off on another one. And so that’s kind of what we do.

The other failure was a little more difficult; I see it as a personal failure because I invested so much time. Over four or five years, I put 40,000 miles a year on my car driving to Fairfield County. This little piece of geography called Connecticut is sandwiched in between Boston and New York. We’re far enough away from Boston, so we don’t have to worry about the Mother Church WGBH, but WNET eats our lunch in Fairfield County. I could never figure out how to pull Fairfield County into our network as I had the other four counties of Connecticut.

We’ve got to get over this “I’m afraid to try this because I may fail, and we’re in a business where all of your failures are public.” We’ve got to get to the point where we will invest in a show and we look at it and say, “Wow, that’s not any good. We’re not going to broadcast it.” Some of this stuff should never see the light of day because it’s not going to get an audience.

I get energized and excited about these over-the-top technologies because people will come to a television program, a radio program or an internet site if you have something that that interest group wants to be a part of.

We also have to admit that if I’m an arts or cultural affairs producer, there are other people in this market who know more about the art world than I do, who know more about whatever than I do. So, you’ve got to figure out a way to do a joint venture, do a partnership with that individual, independent producer or organization and share the glory.

I just don’t know if our industry is grasping that we simply cannot do it on our own. You cannot rely on the people within your own world to take us into the next level. The best ideas, in my opinion, for 3 million folks who live in Connecticut ­— only 110 come to this headquarters every day — come from those 3 million folks and what’s on their minds. That’s where the action is. We’ve got to figure out how to harness it. We become the convener; we’re the catalyst.

The CEO has to have the ability and the wherewithal and the interest to beat the bushes and raise the money because I don’t think we should rely on CPB. They can give us seed money, but we have to have excellent fundraisers in this industry to take it to the next level.

Do you think the public media system needs restructuring? And, if so, if you had a magic wand, how would you do it?

I would get out of the infrastructure business. We still spend hundreds of millions of dollars each year on physical plants. Somehow, we’ve just got to stop that. We have gotten better, with these joint master control agreements. I think that’s a start. But, today’s media can come out of a shoebox. You can produce your material in your garage. So, I think we’re still hung up on infrastructure and we’re robbing the necessary resources that we desperately need for promotion, marketing and new content. There are more economical ways to house 150 people than to have a 100,000–square-foot facility that you’ve got to heat and cool.

We’ve got to do a better job of forming partnerships. Public libraries are hot right now. So, partner with your local library and have 20 people working in the public library downtown, like WGBH Radio is doing. We’re doing the same thing in Norwalk.

We’ve got to get brave about forming partnerships and admitting that we can be stronger if we work together. In my opinion, we’ve tried this independent road way too long.

Correction: In an earlier version of this interview, Franklin mistakenly referred to the amount of Connecticut Public’s endowment as $100 million. It is $47 million.

One thought on “Jerry Franklin: ‘Learn to fail quickly and then get up and keep going’”