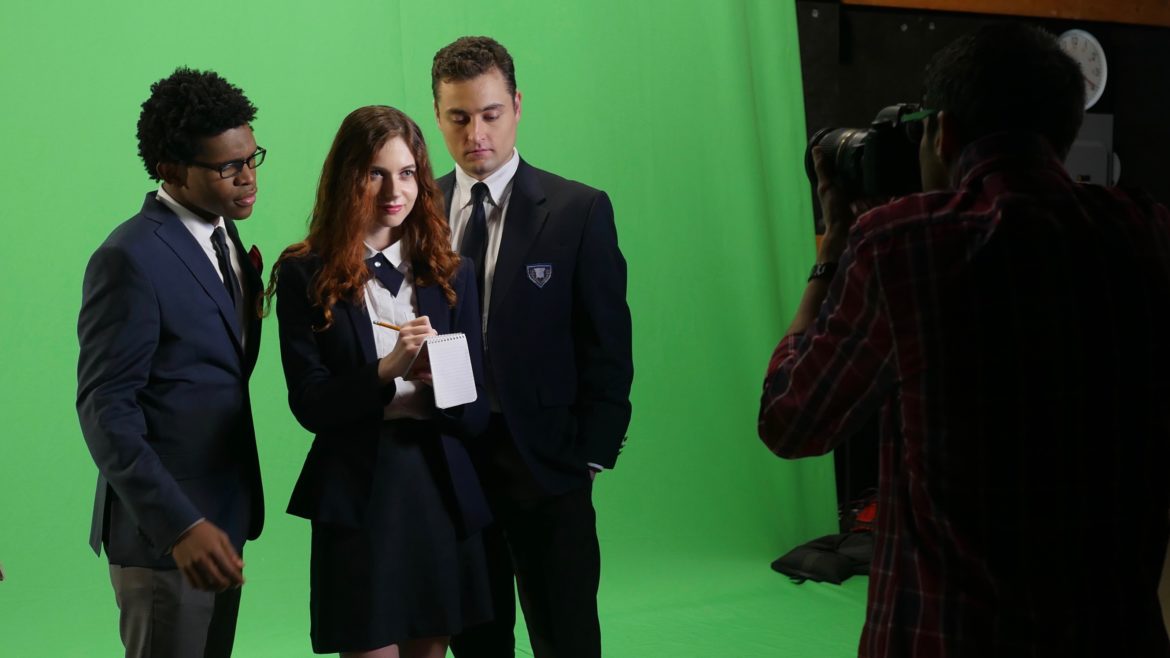 Actors on the set of Cobblestone Corridor. (Photo: CPTV)

“So what are you looking for exactly?” Alan Archer, an intrepid high school newspaper editor played by Erik Bloomquist, asks his informant in a new TV series by the Connecticut Public Broadcasting Network.

“Not sure,” replies the other youth, Johnny Baker (Alan Weppler). “I just know there’s more to this than meets the eye.”

The show is part of a portfolio of content initiatives launched under a “playbook” created for the public broadcaster to find a new edge in today’s fast-changing media landscape.

With consultants from IDEO leading CPBN through a design-thinking process in 2014, the pubcaster mapped out innovations in content, technology, marketing and local outreach that aim to extend its reach across digital and social media platforms, and deeper into the communities it serves. The restructuring, adopted in 2015, was precipitated by the loss of two longstanding franchises of Connecticut Public Television: broadcasts of women’s basketball games from the University of Connecticut and its stake in Barney & Friends.

CPBN dramatically expanded its production portfolio, investing in new content, marketing and journalism initiatives, but it hit snags — a revolving door of top executives, delays in following through on key business strategies and a revenue shortfall that required layoffs among a staff that had expanded too rapidly.

“We knew there would be some broken glass,” said CEO Jerry Franklin. “But … we must change how we do business. We are investing in audience growth, in social, in mobile.”

The playbook process started off with unusual upheaval at the top of CPBN. A trio of executive v.p.’s hired with fanfare in August 2015 to implement the restructuring soon quit or were fired. Dean Miller, former s.v.p. of content, and Allison Lantieri, former s.v.p. of marketing, lasted less than a year. Anthony Hayes, s.v.p. of engagement, departed this month. Now Dean Orton, who as c.o.o. helped lead the revamp, has moved to a new job at Twin Cities Public Television.

“I don’t really know what happened in my own situation, except that they were reapportioning money and needed to lay me off,” said Miller. “After eight months, it was a surprise.”

A former editor and reporter who previously directed the Center for News Literacy at Stony Brook University’s School of Journalism, Miller recognizes the challenges CPBN faces. “Change is hard, and I wish things had worked out better for me, but I believe in what they’re doing, and I wish the crew there nothing but the best,” he said.

To keep momentum going on its marketing and content strategies, CPBN promoted from within and deployed some title-deflation to fill out its leadership ranks. Sarah DeFilippis, now s.v.p. branding and marketing, replaced Lantieri; Elizabeth Messina, v.p. of media strategy, stepped into Miller’s role.

Franklin is focused on recruiting a successor to a critical development position and may delay hiring a c.o.o. to fill Orton’s role.

“We lost some time; there is no question about it,” Franklin said. “… It was a distraction.”

Time isn’t all that was lost, observed John Dankosky, former v.p. of news who now leads the New England News Collaborative, a regional journalism initiative headquartered at CPBN. “We spent a gargantuan amount of money” on the executives who left, he said.

The leadership turmoil was accompanied by a playbook-inspired hiring spree that hurt the bottom line. Since the restructuring started, 32 new staffers have signed on, including 22 last year alone, and CPBN closed fiscal 2016 with a $300,000 deficit, Franklin said. Although he called the loss a “blip” in CPBN’s $21 million operating budget, he said his leadership team must now cut personnel costs by $500,000 and overall costs by $700,000–$800,000.

“We got ahead of ourselves,” Franklin said. “We hired 22 people last year, and we should have hired 14.”

Before IDEO, he said, CPBN’s television and radio divisions barely communicated. Neither did content and development staff. There was no strategy for digital and social media, events or education.

IDEO’s recommendations weren’t necessarily all rocket science, said several current and former staffers. In some cases, they were obvious tweaks to any media organization in today’s fast-changing landscape. In fact, initiatives like the NENC were already underway. But the playbook offered a path forward and a guide.

The new leadership team has moved quickly to implement key elements of the revamp, including beefing up the pubcaster’s marketing activities and designing a new system for tracking audiences.

And under Messina, CPBN’s creative units have been rolling out content that can be deployed across a range of different platforms for the anytime, anywhere, cord-cutting audience.

The Cobblestone Corridor, the original drama, ticks off several objectives. It was filmed on the Hartford campus of the University of Connecticut School of Law using a Connecticut cast, crew and extras. It’s targeted to the young demo that public media covets and was promoted heavily on social media.

The struggle at the Pierce Gazette parallels the challenges of media organizations in transition, like CPBN. After the school’s headmaster is violently paintballed, student journalists debate whether to produce thoughtful investigative reporting or quick online hits.

The second episode of the show drew a “very respectable” 0.84 rating, according to Messina. “We expect to see the audience and buzz around the series continue to build. It’s aimed at a different demographic than our typical Sunday-night broadcast audience, so this is a bold programming experiment.”

With on-air and online marketing supporting broadcasts of Cobblestone, CPBN’s next step is to get viewers to binge-watch the series on PBS Passport, the members-only portal for video streaming, according to DeFilippis. Visitors drawn to the show’s website from Facebook are substantially younger than other platforms, with 25 percent aged 14–18. The majority of visitors, 63 percent, are new users.

In an NENC field production, Dankosky and his crew reported from the Easter States Exposition in Massachusetts. (Photo: NENC)

With NENC, a CPB-funded regional collaboration of eight New England broadcasters, CPBN is boosting its news output. Dankosky is executive editor and host of a new weekly show on regional topics, Next, which premiered in August on WNPR and three additional NENC stations. In addition, WNPR’s weekday show, The Colin McEnroe Show, expanded its production team and is earning plaudits for its coverage.

Recent data suggest that these efforts, and a sharpening emphasis on using audience measurement and analytics to guide decision-making, are bearing fruit. On CPBN’s legacy broadcast platforms, television viewership for the quarter that ended in September was up 5 percent from last year, and radio listenership grew 7 percent after a previous two-year decline. In digital metrics, email subscriptions rose 16 percent, and social media followers nosed up 6 percent.

NENC’s Dankosky said the IDEO process “really did help us with some great ideas about how to change the company. We have a marketing team, and that’s something we never had before. We have made investments in our news and our talk shows. Those are really positive things that came out of this.”

But he also worries the revamp may have become too top-down and less focused on the creative people in the trenches who are the source of innovation.

He cited The Radius Project, a podcast series exploring local landmarks that emerged early in the IDEO process. It was originally overseen by project manager Suzi Craig, Dankosky said, “who pulled together lots of people who hadn’t really worked together in the past. We were very collaborative and good ideas were bubbling up.” Craig left when the first round of e.v.p.’s was hired, and the project lost momentum. “I want to get it back,” Dankosky said.

Key behind-the-scenes work in research and marketing is guiding content decisions and, it is hoped, will eventually build revenues. Since joining CPBN last fall as director of market research and development, Lauren Komrosky has been collecting data from across divisions and investing in software platforms. The idea is to crunch numbers into blueprints that can be used to inform programming choices and, ultimately, attract donors.

“Member data, social media accounts, Nielsen data, website data and email data — the list goes on and on,” said Komrosky, who brings digital marketing experience from BusinessOnline, Ogilvy & Mather and FCB. “I had to identify it, get access to it and see what we had.”

Through customer-experience software Qualtrics, Komrosky learned that the new Infinity Live concert series was a hit with audiences and why. “We could ask people what they thought,” she said. “We could see if it was having a positive impact.” Research also informed a rebrand of The Faith Middleton Show, a signature WNPR program for 36 years, into Faith Middleton’s Food Schmooze, and helped boost its social media profile.

In a marketing overhaul, DeFilippis is prepping a demo reel for a branding campaign that will unite the broadcaster’s diverse media platforms (CPTV, CPTV Kids, CPTV Sports and WNPR Radio as well as print, education, events and digital properties) under one banner, “Mindful Media” — a name culled from more than 2,000 possibilities. She will present the reel to CPBN’s board in December, when it takes up approval of the rebrand.

A key piece of the marketing playbook — expansion of the underwriting sales team — was left for last in the revamp, according to Orton.

CPBN planned to double its underwriting sales force from three reps to six; so far it has made two new hires, who specialize in digital media. It’s “one area we really hadn’t gotten to invest in yet,” Orton said. “But we are really making that investment.”

“We probably did not move fast enough,” Franklin said. The corporate sponsorship market is increasingly focused on digital, and “a year ago, we didn’t have enough digital properties,” he said. “We still don’t, to make a multimillion-dollar difference in corporate underwriting.” The network’s reps typically sell up to $6 million a year in traditional corporate underwriting, and “that’s getting tougher to do without an aggressive digital footprint.”

Franklin believes that investing in new content and marketing will pay off. “You’ve got to spend money upfront, put content first and hope [sponsors] will follow,” he said.

And despite financial pressures to reduce spending, CPBN may move forward on another expensive playbook plan to expand its physical footprint into cities and towns across Connecticut. Franklin is weighing whether to invest up to $7 million to build an innovation and tech center in Norwalk. If the plan moves forward, Torrington would be next, Franklin said, followed by an outpost in the eastern part of the state.

As Franklin, who has been at the company for 35 years, seeks fresh cash to remake the organization, he’s also building CPBN’s endowment. The network’s board asked him to amass a war chest of upwards of $60 million over the next few years before he retires. So far CPBN has $34 million in the bank and another $10 million committed.

CPBN’s financial picture could brighten with payouts from the FCC’s television spectrum auction, but Franklin declined to discuss potential proceeds. In 2014 the network negotiated an agreement with spectrum speculator LocusPoint Networks to relinquish spectrum assigned to WEDW-TV in Bridgeport. Anything raised from the auction, which is generating far less interest from wireless companies than anticipated, would go towards the endowment.

Franklin is committed to moving ahead with CPBN’s restructuring.

“We were serious when we embarked on our strategy to change the culture of this company, and we will do it,” he said. “It will just take longer than expected.”