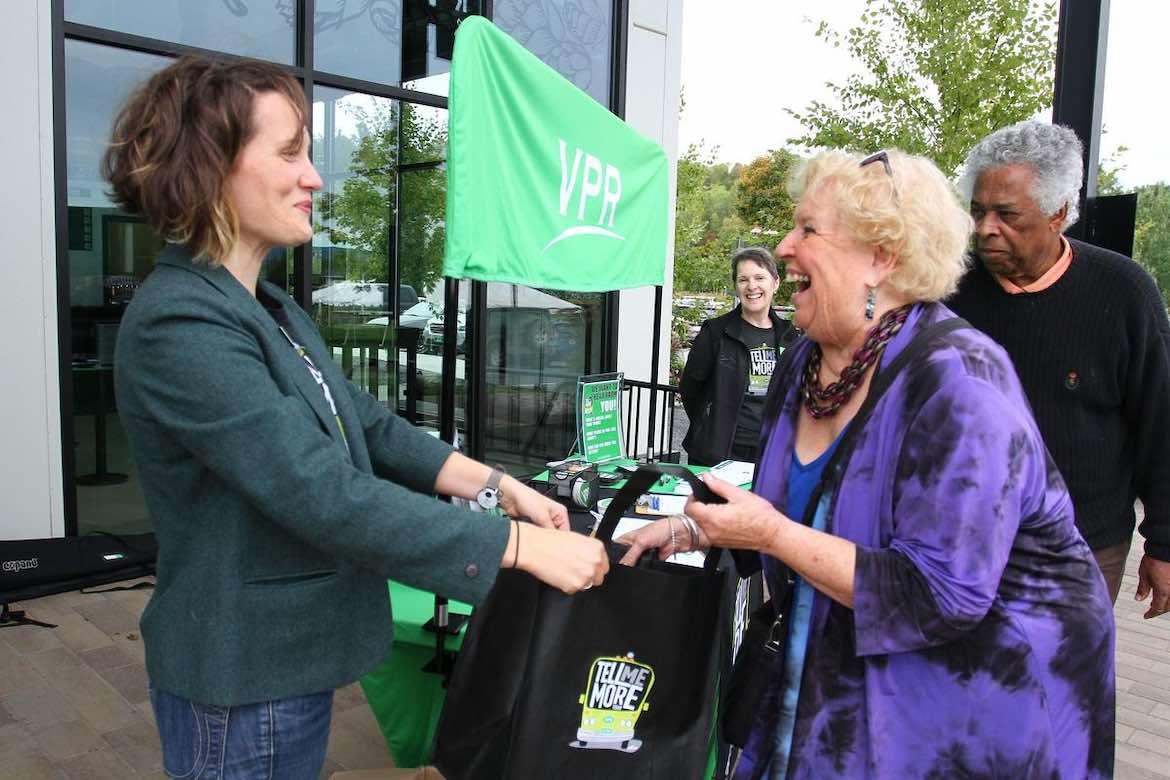 I had no idea what to do first when, several years ago, I took the helm at West Virginia Public Broadcasting. I called Skip Hinton, then head of the National Educational Telecommunications Association, who gave me some valuable advice from his time in Alabama: “Go on a listening tour.”

We did, and heard an earful about what we were doing right and wrong. (We also learned that many people had little idea who we were.)

So when I started a new gig at Vermont Public Radio, I was thrilled to learn that VPR’s marketing and engagement staff had been thinking along the same lines: to host a series of events across the state to hear from as many people as we could.

The result was the Tell Me More Tour. Over four months last summer and fall, we met more than 700 people in all 14 counties of Vermont. We met them at a farmers’ market, restaurants and a bagel shop, a brewery and a cidery, museums and arts venues. The tour had a fun logo and custom tote bags (of course).

Through trial and error, we learned a lot. Here are some dos and don’ts for planning your own listening tour:

As public media stations, we are used to being the ones who do the talking. A listening tour flips this paradigm on its head. The people and their opinions are the performers. Our staff and board members are the audience.

This is the secret sauce of any listening tour. If you remember anything from this article, it should be this. Don’t try to tack listening onto a performance or “normal” event — make listening the entire point.

Instead of a program, VPR asked participants to answer three questions:

We asked them to write their answers on huge Post-it notes. (Later, we hung these in the station’s lobby, right next to the kitchen and bathrooms.) We also transcribed these notes into a huge database.

At bigger events, we asked people to pair up with someone they didn’t know well and discuss their answers, and then share them with the larger group. This “pair and share” routine was simple and effective in keeping people engaged and kept with the public media ethos of connecting communities and people.

It’s not enough for just station leadership or the development staff to attend. The audience wants to meet everyone — especially reporters and hosts. More than 90 percent of VPR’s staff participated in at least one Tell Me More Tour event. Most board members did as well.

One reporter who planned to go to just one event ended up attending three. He said it was a good place to develop new sources and that it was useful to hear directly from listeners how important his reporting was to their lives.

4. Do go everywhere you can.

Every place I’ve lived, there are communities that feel neglected or left out of the conversation by public media. And usually, they have a point.

In cities, this can mean immigrant communities or low-income areas. In states like Vermont and West Virginia, the people who live in the most rural areas feel ignored.

Our idea was to systematically visit all 14 Vermont counties. This paid off in Vermont’s isolated Northeast Kingdom, home to three sparsely populated counties.

5. Don’t forget to tell everyone.

We advertised these events constantly — on the air, online, even in outside local media. Of course, the best advertising is word-of-mouth; that’s why we collaborated with existing partners to help get the word out in the various communities we visited.

It’s not just about the attendance. It’s about making everyone know you are making the effort to be in their community — even if they can’t make it personally.

After each visit, I wrote a quick summary of what I heard and posted it on our website, and we followed up with anyone who had provided us with their email address. Meanwhile, we were tabulating all these comments into a massive word cloud. When we were done, our marketing and engagement team sifted through all this data, and we reported back to our audience on what we learned.

And in addition to these visits, VPR found more scientific ways to take the temperature of our audience and of all Vermonters. We hired a survey firm to ask our listeners, nonlisteners and members about their perceptions of VPR. And in the lead-up to the 2018 election, VPR and Vermont PBS combined forces to conduct two statewide public opinion polls.

In general, Vermonters asked for more coverage of jobs and the economy. They were worried about Vermont’s aging population. Addiction, school consolidation and climate change are also important to them.

They asked us to tell more hopeful stories — not just problems, but solutions, too. They reaffirmed the value of the old-fashioned broadcast signal in a rural, mountainous state, while still wanting us to expand into new digital platforms.

Most importantly, they asked us to come back. In person. As often as we can.

In response, VPR has increased both our events and engagement staff and more than doubled our planned events from just two years ago.

These events will be focused on our programs and content — a live version of our children’s podcast But Why?, intimate classical music performances and an experiential event around our people-powered journalism project Brave Little State.

But in a few years, I think it will be time for “Tell Me More II: The Reunion Tour,” starring the one and only VPR Audience.

Scott Finn is president and CEO of Vermont Public Radio. VPR’s Manager of Marketing and Communications Michelle Owens contributed to this article.