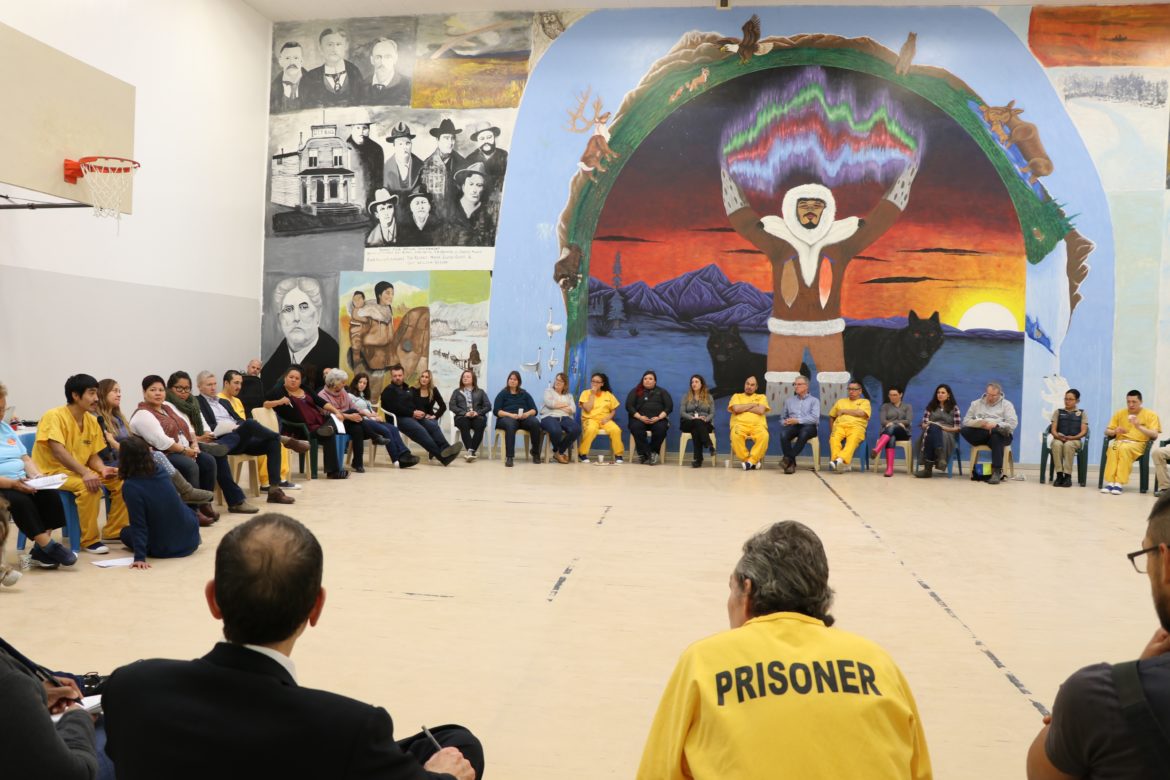 Prisoners and community members gather for a Community in Unity event in August at Anvil Mountain Correctional Center in Nome, Alaska.

Anne Hillman needed to do some convincing to bring her idea of hosting public radio events in a prison to fruition.

Hillman, a reporter for Alaska Public Media in Anchorage, had been hosting a series of events titled “Community in Unity” in public spaces. The events aim to create safe spaces where community members can discuss issues and “hear from others who have different life experiences from them,” Hillman said.

She was reporting a series about how prisons prepare inmates for release, and it “seemed natural to have a conversation around re-entry with everyone who is affected by it,” including inmates and community members, she said.

She approached the Alaska Department of Corrections about inviting local residents into prisons for discussions with inmates, covering topics such as recidivism and conditions in the facilities.

“‘Maximum-security inmates talking opening with community members on the record?’” That’s how Megan Edge, public information officer for the Alaska Department of Correction, recalls her initial reaction to Hillman’s proposal. For many years, the state’s correctional system had been “very closed off,” Edge said.

Yet she eventually came around to the idea and got the superintendent to agree. The first event, held in September 2017 at the Spring Creek Correctional Center in Seward, brought together 25 community members and prison staff with 10 inmates, who sat in a circle. The conversation was recorded for a radio broadcast.

“We were all very nervous, but to this day, we still talk about what a turning point that event was,” Edge said. “People actually listened to each other,” she said, and community members “asked smart questions” and provided words of encouragement to inmates. Inmates opened up and shared “vulnerable details of their lives.”

They also discussed difficulties of rejoining society after being incarcerated. Spring Creek inmate Lamont Moore said the “biggest thing was the rejection. I’d go put in an application and nobody calls me back, so you stoop down lower than what you applied for, and still nobody call you back. I went all the way down … to be the man in the Little Caesars costume just to provide for my family and kept getting denied. So I went back to what I knew how to do. So I sold drugs for a living.”

Moore thanked community members for participating in the event. “It’s really helping us more than you guys think it is,” he said.

“When the event was over, the walls had been broken down,” Edge said. Community members and inmates “were mingling, sharing food and asking more questions.” Attendees stayed so long, the event was still going on when Edge had to leave.

“The input I’ve gotten is that the folks who are incarcerated feel like they’re humans again, they feel listened to in a way that they aren’t normally.” — Anne Hillman, Alaska Public Media

After that gathering, APM held three more Community in Unity events in prisons. The conversations were “valuable because they were real,” Edge said. “These weren’t department talking heads discussing incarceration, but the people who’re living it and the people who’ve been affected by crime. I can’t say enough how powerful these events have been. Sure, inmates discussed issues that were not flattering to the department, but they should discuss them.”

The conversations even spurred community members to take action. At one prison, inmates discussed the lack of educational opportunities and said a grant for newspaper subscriptions for the facility had run out. After the event, people donated books and newspaper subscriptions to the prison. Some participants began volunteering to teach incarcerated women, Hillman said.

Community in Unity won Current’s 2018 Local that Works contest, a collaboration with the Public Media Futures Forums to spotlight innovative multiplatform initiatives at public media stations. Alaska Public Media received $5,000 in October at the Public Radio Super-Regional conference in Atlanta, where leaders in public radio voted for a winner after seeing presentations by four finalists.

APM launched the Community in Unity events in 2015 as panel discussions in its TV studio. In 2017, it began taking the discussions outside the station. Locations included a homeless shelter and a theater. 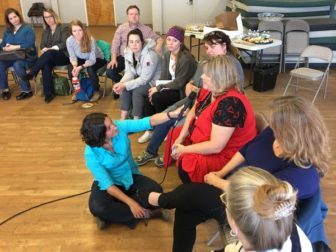 Hillman interviews a community member during a Community in Unity event about homelessness.

Hillman hosts APM’s events as part of her work as the station’s solutions desk reporter. The station created the solutions desk in 2017 as an evolution of Hillman’s work reporting on urban affairs and issues like poverty, housing and food insecurity.

Hillman shifted from looking at problems in the community to exploring effective solutions and reporting on the community’s efforts to solve those problems, said Lori Townsend, APM news director.

Community in Unity “caught its stride” when APM started the solutions desk, according to GM Ed Ulman. The community conversations put Hillman in a better position to “tell a fuller story about what’s happening, versus just your top-line, ‘Here’s a problem, let’s report on it’” approach, Ulman said.

So for a 2016 event about race and identity, Hillman decided to arrange the room’s chairs in a circle. The approach was inspired by “Advancing Native Dialogues on Racial Equity,” a project by the First Alaskans Institute that convenes conversations about race and racism in communities throughout the state. The format allowed more attendees to share stories, and they were “really open about their own experiences,” Hillman said.

The event about race and identity pleasantly surprised Townsend.

“I was astounded at the ethnic diversity that we had in the crowd,” she said. “… Public broadcasting has a predominantly white audience, and so having that diverse mix in our television studio was just so incredible to see.”

The diversity was “a direct result of Anne’s strength in networking and developing great contacts in a wide range of service organizations,” Townsend said. “Anne has the ability to easily start conversations with people she doesn’t know and put them at ease so they’re more likely to engage and participate in future events.”

Townsend said she was concerned at first that community members would perceive the events as veering into advocacy.

“One of my concerns was just the journalistic ethics of, are we doing this in a way that helps people understand but doesn’t make it look as if what we’re trying to do is say, ‘Oh, poor people who are locked up,’” she said. “Because that’s not what it’s about. It’s about who are these people and humanizing them, just like we want to humanize who victims of crime are.”

But she said she believes the events have avoided advocacy.

“I think it’s really important when you’re setting up these forums in the community that you are talking to a broad spectrum of everyone who has either direct or indirect contact with whatever the topic is, so that you’re not just looking at the people who are advocating for people who are experiencing homelessness, say,” but also talking to people who have concerns about the issue, she said.

During a presentation about Community in Unity at the Super Regional conference, APM editor Annie Feidt encouraged other stations to explore similar projects.

“We’re a small local newsroom,” she said. “We have limited resources. Anne was our resource for this project. And I would guess every newsroom has someone like Anne, a reporter who begs to go out into the community to talk to people who aren’t usually represented on the news, someone who has the vision to ask to go inside the institution that’s as walled-off as a prison.”

Hillman wants to hold future Community in Unity events in community spaces but wants to develop new ways to elicit ideas for topics.

“I want to put a much stronger emphasis on getting the conversation topics straight from the community versus stemming from things that we’re doing” and her reporting, she said.