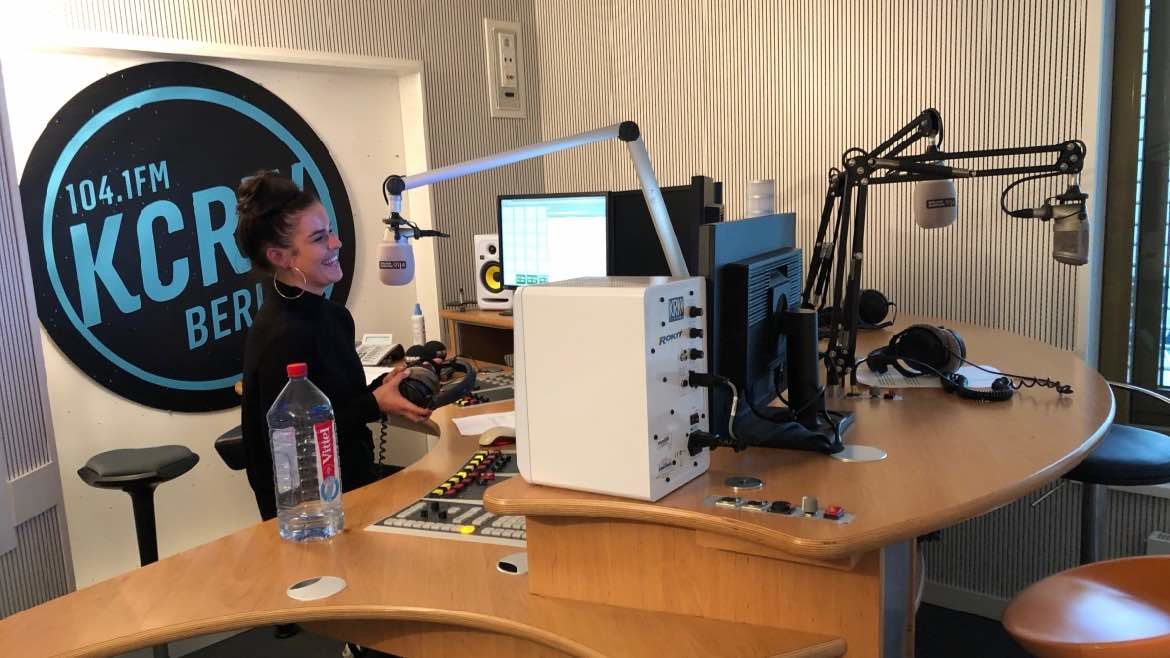 More than 5,700 miles away from Los Angeles, on the fourth floor of a German shopping mall next to the facade of an ancient castle being turned into high-rise apartments, sits the offices of KCRW Berlin.

“We are an American public radio station, even though we are a private, nonprofit German station,” said Susan Woosley. Confirming the transnational identity of KCRW Berlin, Woosley’s business card identifies her as the station’s Geschäftsführerin, a German title that roughly translates to “operating managing director.” A Japanese “money tree” sits on her desk next to her calculator, sending good vibes for the financial survival of a station still finding its footing in a foreign land. 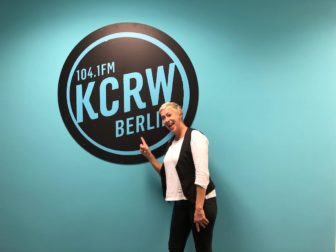 Susan Woosley, the “Geschäftsführerin” of KCRW Berlin, hopes to make the station a meeting spot for the city’s English-speaking community.

KCRW Berlin, which turns one year old Tuesday, is more than a quirky venture for its namesake: It continues an American diplomacy mission via the airwaves that dates back more than 70 years. The station’s backers hope that it can be both a marketing opportunity for KCRW and a unifying force for the city, which has seen rapid growth in recent decades.

After enduring the destruction of World War II and division by the Iron Curtain, Berlin has rebuilt itself as a vibrant international hub. A significant portion of the estimated 50,000 people moving to the city each year speak English, and Woosley sees each as a potential listener — and maybe even a donor.

The station began life as an American Forces Network signal in 1945, broadcasting news and information in English to Allied troops after the war. It became a Voice of America station in 1994 at the behest of the newly reunified German government, which wanted Americans to remain on the air as a gesture of goodwill between nations.

Former U.S. Ambassador to Germany John Kornblum disliked the VOA broadcast, an unwieldy mixture of heavy metal and English-language news bulletins. “It was just a total example of how America always seems to get things wrong the first time,” said Kornblum, who headed his ambassador post from 1997–2001 and now leads a law firm in Berlin.

Kornblum had an idea for a better fit: NPR, he believed, was “the very best picture of America you can get.” After Kornblum contacted Jeff Rosenberg, then the head of NPR Worldwide, the network pursued the signal and begin broadcasting in 2006. 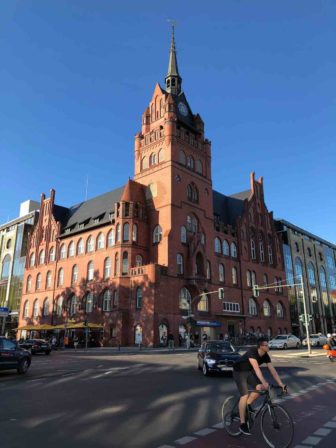 KCRW Berlin’s offices are in the Steglitz neighborhood in the city’s southwest.

NPR Berlin was an odd fit for the network. It was the only member station NPR owned and operated outright, and it was also the only one outside of the U.S. Yet NPR had no physical presence in the city. It managed all programming from Washington, D.C., and put no money toward local content.

“A big part of the money that NPR was spending was just in communication, just getting the content over,” said Karen Roth, an American venture capitalist who lived in Berlin for 10 years. “But what they didn’t have was funds to cover local production.”

To help advocate for the station, Kornblum, Roth and American Council on Germany Director Marie Warburg formed Friends of NPR Berlin in 2013. Woosley joined the following year. The daughter of a U.S. Foreign Service employee, she first heard NPR programming on the AFN as a child in Tehran, Vienna and Warsaw, so getting involved with NPR’s Berlin affiliate was a natural step for her. “We quickly became the operative branch of the station,” she said.

Friends of NPR Berlin registered as a German nonprofit and put on community events, established partnerships with organizations including America Abroad and Zócalo Public Square, and raised around 30,000 euros (approximately $34,700) annually for the station. The group also hired freelancers to produce editorial content, packaging the stories as a short-form program and running segments throughout the week.

Meanwhile, priorities were shifting at NPR as it underwent multiple leadership changes. In April 2017, after 11 years of operating NPR Berlin, the network announced plans to vacate the signal later that year.

That’s when a savior emerged from Southern California, nine time zones away.

The seeds for KCRW Berlin were planted while NPR still owned the station. Roth had lived in Los Angeles for 12 years and was a devoted listener to KCRW before helping to form Friends of NPR Berlin. In that capacity, she met with KCRW President Jennifer Ferro to discuss collaboration with NPR Berlin and joined KCRW’s board.

“At that point in time, I didn’t even know what a clock was,” Roth said. But Ferro, she noted, was immediately encouraging. “She looked at me and she went, ‘You have something super special here. You are the only affiliate outside the U.S.’”

That connection led Friends of NPR Berlin to collaborate with KCRW before any formal partnership was in place. The station dispatched three hosts to Berlin in 2015 to put on live versions of their shows. When NPR gave the Friends a brief window of time to try to keep the station, the group convinced KCRW to partner so it could make a bid to the German government for the signal. KCRW Berlin signed on Oct. 16, 2017.

“I felt that Berlin had so many parallels to Los Angeles: film, art, music, politics, a global connector of people and ideas,” Ferro said. When the opportunity to collaborate came up, “it just seemed like a natural fit.”

KCRW Berlin funds its own staff and operations, including a full-time programmer, Jennifer Wolfe, who sets the schedule and reads the Berlin weather from KCRW’s Santa Monica office.

“Germans are not accustomed to donating to anything.” — John Kornblum, former U.S. ambassador and co-founder of Friends of NPR Berlin

“I’m always thinking about tomorrow,” Wolfe said about the challenges of programming a station nine hours in advance. “Sometimes it’s hard to stay grounded here in Los Angeles, because my head and my efforts are always in Berlin.” Like much of KCRW Berlin’s staff, Wolfe has a connection to Germany: She spent part of her childhood in Bavaria, where her father was stationed at a military base.

Two additional full-time and two part-time staffers are based in Berlin, and the station rounds out its staff with volunteers, freelancers and a revolving door of American fellows from programs like Fulbright.

The benefits for KCRW are less tangible, but Roth said the Berlin station is “a huge marketing and distribution channel.” Berliners can hear eight-hour nightly blocks of the station’s Eclectic24 music stream, as well as other KCRW programming like Press Play and Good Food. The station also airs a tape-delayed All Things Considered mornings and a live Morning Edition from late morning into early afternoon, along with shows such as This American Life, Radiolab and 1A.

The programming gives listeners an American view of the world. But KCRW Berlin is “not an expat station,” Woosley said.

To establish a more concrete presence in Berlin, the station plans to expand its local programming beyond the stories it now inserts within the NPR newsmagazines. Woosley is seeking funding for politics and culture shows, including a storytelling show that will be a Berlin-based take on The Moth.

The station will launch its first original music show in November. Brave New Rave will focus on techno, electronic and acid, tipping its hat to Berlin and L.A.’s shared affinity for underground culture. The show will be hosted by Moderna, a DJ who is herself an L.A. transplant.

Funding all this is a big challenge, especially in Germany. Berliners already pay a hefty media tax toward their own public broadcasting system. A radio station that relies on listener donations is a foreign concept.

“People say, ‘Yeah, “listener-supported,” I get it,’” Woosley said. “And I say, ‘No, we’re entirely dependent on private donations.’” That’s a tough sell for many listeners: “There’s a mentality of, ‘Well, I already gave at the office, thank you.’”

Kornblum puts the funding challenge more bluntly: “Germans are not accustomed to donating to anything.”

Nevertheless, KCRW Berlin is holding a pledge drive on its first birthday. It’s also pitching German companies on underwriting, and Kornblum authored an article for the magazine of the American Chamber of Commerce in Germany to announce the push.

KCRW Berlin’s pitch to donors and underwriters rests on the idea that it’s “more than just radio,” Kornblum said. Instead, it is pushing the idea of a community gathering space for English-speaking Berliners. “That’s exactly what NPR stations do in America, too,” he said.

Interviewees declined to share specifics about the station’s budget, citing its quickly expanding programming and operations. NPR financial statements for fiscal year 2017 reported a $1 million net operating loss carry-forward from NPR Berlin operations during its final year under the network.

“We are able to fund what we do now, no problem,” Roth said. “In that sense we are self-sustaining. But we would like to be able to do more programming, especially more focused shows.”

However KCRW Berlin gets the money, station reps say their mission of goodwill between nations has taken on renewed importance as President Trump and German Chancellor Angela Merkel clash over issues such as trade and the refugee crisis.

“The whole idea of maintaining the Atlantic link, regardless of who’s in the White House, is important to me,” Kornblum said. “In fact, I think it’s more important now than it’s ever been.”

This story was reported with the assistance of the Rias Berlin Commission fellowship for U.S. journalists.

2 thoughts on “One year in, KCRW Berlin preserves a U.S. diplomacy mission via radio”