The Pacifica Foundation has hired its first permanent executive director since 2015. 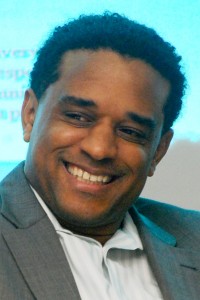 Jackson has worked in numerous leadership positions in public radio, most recently as station manager at ideastream in Cleveland. He also served as president and CEO of the National Federation of Community Broadcasters.

He now joins a five-station network that has long battled financial woes and grappled with a board and management at odds with each other. Its latest tax statement shows negative net assets of about $4.5 million. But Jackson says he’s hopeful he can turn around the financial position by getting back to basics and best practices.

Current spoke with Jackson about his vision for the foundation and the way ahead. This transcript has been edited.

Current: Pacifica has had its share of financial problems and infighting. Why do you want to lead the organization?

Jackson: Instead of looking at the obstacles, I’m focusing more on the opportunity. That’s number one. … I’m really attracted to public service. I’m attracted to the opportunity to be innovating. Also inclusive innovation, if you will. Just the fact that this is an organization that has a long track record of having racial and ethnic equality as part of its motto or its creed.

I like the fact that it’s in some amazing markets: Houston, L.A., the Bay Area, New York, D.C. And I just think it’s an amazing opportunity to increase the public service that these stations offer and that the network offers as a whole. I’m also attracted to the fact that they’ve got this incredible Pacifica Archives to draw from. So I’ll be looking at how we can monetize that more, and how we can make these stations much more fiscally sound by looking at everything from content and engagement to making sure that governance, operations and all those elements are squared away as well.

What are your aspirations for the organization?

The first one I would articulate is just to make it financially stable. Not just the organization but the individual stations.

I think second is to take advantage of what would be called the network effect. We’ve got these five stations. Other than Democracy Now!, there really isn’t enough connective tissue in terms of content. Even though we have some mechanisms in place for there to be shared content, there really are no national programs in the roster. There’s an opportunity to cultivate some talent for presentation nationally, so we’ll be looking at that. And so that means creating some national programming, improving on the local presentation of content.

We obviously need to upgrade where we are in terms of digital, and so we’ll be looking at how we can develop some digital assets. Then, I would say, we’ve got well over 200, 250 affiliates. … How do we maximize the opportunity that exists with having that kind of distribution?

Do you have ideas for how you want to make the foundation financially stable?

A lot of it has to do with just making sure that we’re adhering to established best practices in the system, public media, whether it’s Greater Public or other organizations that have been really steadfast in doing the work to uncover, from a research standpoint, what are best practices for revenue generation, for fiscal responsibility, that kind of thing. If we can employ best practices, I think that will help us significantly.

The other thing is that I think Pacifica for a long time has either been resistant to or shied away from certain practices that are common in public media and community media, such as underwriting and things like that. So we have to analyze what works best for us moving forward, recognizing that some of the policies that we might have had in place years ago may not be relevant or proper now.

The media landscape has changed. There’s plenty of information that makes clear how stations are diversifying revenue, and so we need to be current with respect to that. … How do we conduct membership in a more up-to-date and efficient and effective way? Everything from sustainers to just making sure that our pledge drives are presented in a way that is up-to-date and current and makes sense in terms of the media landscape we’re working out of.

You mentioned governance. Are there changes you’re looking at?

It’s a little too early for me to articulate anything in that area. … There’s a reputation quite frankly of governance being an issue. I’m still studying what are the issues that are creating that tension, if you will. And so until I really get a full grip on that, it’s probably premature for me to discuss it.

What I will say is I’ll be looking at what are some best practices in governance with respect to public media, community media, and deciding whether we’re adhering to those things, number one. But two, are there things that we can do to make sure that our processes allow the organizations, both the national and the individual stations, to operate more efficiently and effectively?

What is your top priority?

What’s been told to me is that one of the biggest priorities that I have moving forward is to generate more audience, which means that they’re looking at my programming experience and acumen and hoping that I’m going to be able to make a difference — both at the local station level in programming, but also and probably more importantly at the national level.

I think there’s a realization that what makes the NPR stations so effective in audience development and engagement is the fact that they’ve got anchor programs, national anchor programs. Other than Democracy Now!, the Pacifica stations and the network as a whole are without that. And so there’s a need to establish some national programs. So we’ll be looking very sharply at what we can do in that space. Some of it may come across as low-res at the beginning. It may be less ambitious as I think where we’d like to get. But as we get more financially sound and stable and solidify the network, I think will start to express some more ambitious national programming models.