The ongoing standoff over Pacifica’s leadership reached the California courts last week, opening what could become a protracted legal battle over the Pacifica Foundation board of directors’ decision to fire executive director Summer Reese.

Reese, who has defied the board’s March 14 vote to fire her and taken up residence in Pacifica headquarters in Berkeley, filed a civil lawsuit in Alameda County, seeking a restraining order to reverse the board’s decision.

During an April 9 hearing, Superior Court Judge Ioana Petrou denied the request by Reese and her supporters for a temporary restraining order on procedural grounds. Petrou will rule May 6 on Reese’s request for a temporary injunction to stay the board’s decision. 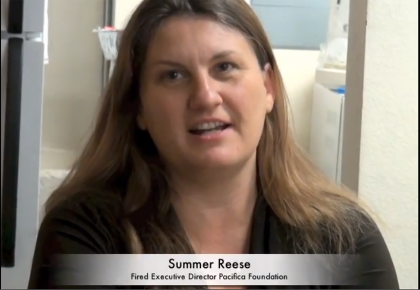 Reese in a documentary filmed by the Labor Video Project during her occupation of Pacifica’s headquarters.

“I wasn’t surprised by the decision, a temporary restraining order is a high bar and this is a complex case,” said Amy Sommer Anderson, the attorney representing the plaintiffs, Pacifica Directors for Good Governance. “And, we’re encouraged by what the judge said and where we’re at going into the next hearing.”

The lawsuit names the Pacifica Foundation board members who voted for Reese’s removal, including Chair Margy Wilkinson and Vice Chair Tony Norman, as defendants. The complaint alleges that Reese’s firing violated Pacifica’s bylaws and was “improper, unlawful and fiscally reckless.” The plaintiffs don’t seek monetary damages, but ask the court to overturn the board’s decision and immediately reinstate Reese.

The Pacifica board is fighting the lawsuit. “We are working with the attorneys and authorities on how to move forward,” Wilkinson said in an interview. “We have a new interim executive director in place and we are considering our legal options.”

“The board felt it was well within its rights to terminate her employment,” Wilkinson said. “And, with the lawsuit, there are certainly big disputes we have about matters presented as fact.”

The board appointed Bernard Duncan, former g.m. of Pacifica’s KPFK in Los Angeles, to serve as Reese’s successor on an interim basis, although he and Wilkinson are shut out of Pacifica’s headquarters.

The two competing camps have denied each other access to financial information: Reese controls records stored within Pacifica’s offices and Wilkinson and Duncan are withholding access to KPFA’s books. The impasse prevents Reese from working on a long delayed systemwide audit, she said.

The Pacifica board has not ruled out asking the police to remove Reese from the building, according to Wilkinson.

Reese told Current that she intends to stay in Pacifica’s offices as long as she can. “Someone still has to make decisions and get things done,” Reese said.

While the warring factions jockey for control, Pacifica remains in a precarious financial position.

Last August, Pacifica laid off almost all paid staff of WBAI-FM in New York, reducing personnel costs of the cash-strapped outlet to the bare minimum.

The network’s most recent independently audited financial statement, released in October, revealed a host of potential problems within the Pacifica’s internal financial controls in fiscal 2012. The foundation closed that fiscal year with a $979,000 net reduction in unrestricted assets.

“The Foundation’s net assets are currently in a deficit position, and the absorption of large losses at individual divisions cannot be sustained if the Foundation is to remain a going concern,” the auditors wrote.

CPB funding isn’t likely to be restored anytime soon, according to Reese. Delays in getting Pacifica’s books in order will make it very difficult for the organization to meet the Aug. 13 deadline to file tax statements, she said.

“So, the money we’ve been waiting for from CPB will again be postponed because of a lack of participation,” Reese said. “We are in a precarious situation and not getting the CPB money is not helpful.”