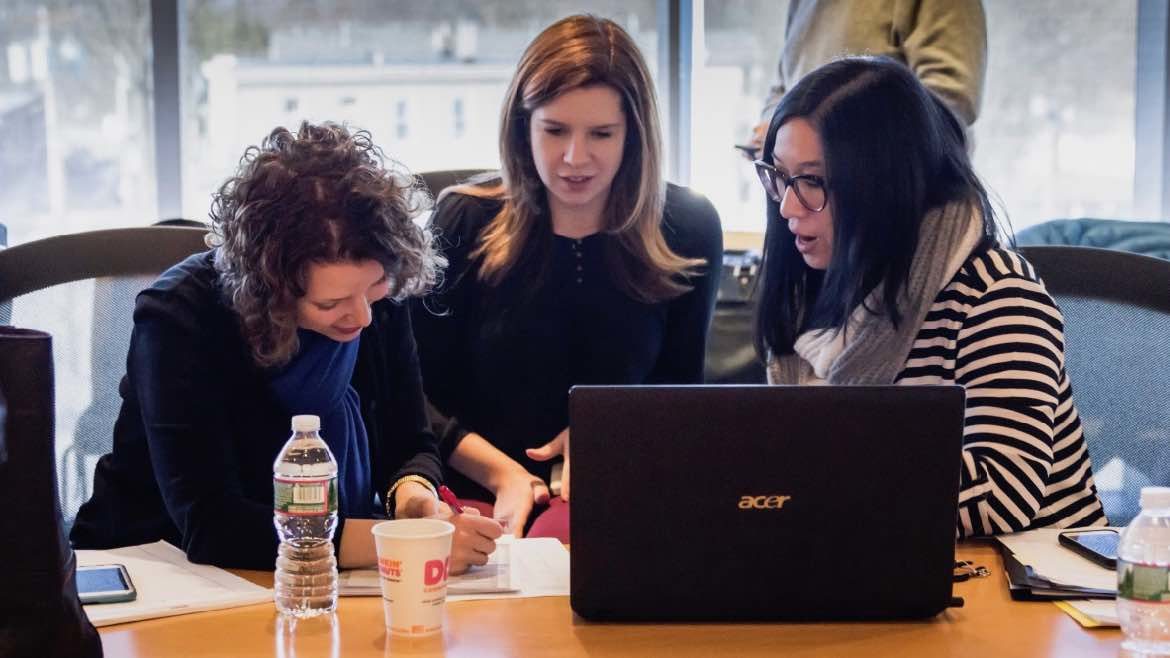 When Next Generation Leadership launched with fanfare nearly three years ago, the program promised to prepare promising talents of diverse backgrounds to move into executive roles within public media.

With a focus on visibility and access, NGL was designed to address the lack of diversity in public media’s production and programming ranks — a systemwide problem that undercuts mission-centered goals to reflect the diversity of American society.

NGL, a yearlong initiative akin to an executive MBA program, identified eight rising public media leaders and primed them for top programming positions across public broadcasting. Most of the fellows were working as middle managers at stations when they entered the program. They received specialized training and guidance from mentors and made valuable connections that expanded their professional networks.

Participants described an “incredible” and “transformative” experience that enabled them to advance in their careers, but none has landed the executive-level job that they prepared for. Some participants question how much the fellowship will help them rise through a system with so few openings for top leadership positions.

“As fellows we were getting this amazing training, learning about the value of diversity, learning about how implicit, unconscious and other biases impact hiring and promotion practices, knowing what we could all bring to the table,” said Fellow Cheraine Stanford, who responded to questions in writing. After starting NGL, she ascended from senior producer to content strategy director at WPSU in University Park, Pa. “But the system as a whole wasn’t getting that same education,” she said. “It was hard to come out of the program feeling like a new person and go back into a system that felt the same.” 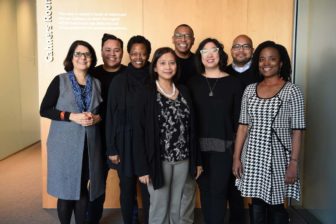 Current talked with all but one of the eight fellows and two of the three co-executive directors about how NGL worked and plans for its continuation. CPB and PBS funded startup of the initiative, said Judith Vecchione, NGL co-executive director at WGBH in Boston. She is seeking foundation funding for a second class of fellows.

Five of the eight fellows have taken on expanded roles within their stations. Kris Vera-Phillips, a senior news producer with KPBS in San Diego, was managing a daily radio talk show and a nightly TV news program when she entered the program. Now she is managing two TV shows, Evening Edition and KPBS Roundtable.

Three of these five have new titles that reflect their broader leadership roles. Stanford credits NGL for helping to secure her promotion. During the fellowship, Linda Wei was promoted from manager to director of digital strategies at Nashville Public Television. Patricia Alvarado Núñez moved up from a series producer within WGBH to co-executive producer of Sing That Thing!, a local production, and Stories from the Stage, a national production for the World Channel.

Another fellow, Terence Shepherd, is the newly named chair-elect of the Radio Television Digital News Association and the first of African descent. He is news director with WLRN in Miami.

Three NGL fellows left full-time positions with public media organizations. Shayla Harris departed as senior producer for digital video at Frontline to become an independent producer. Andrew Ramsammy was laid off by Public Radio International, where he was director of content projects and initiatives. He’s now working as a public media consultant who advocates for system diversity. Lee Hernandez, who entered NGL as a producer for Morning Edition on WNYC in New York City, moved on to become a producer with Audible. He did not respond to several interview requests.

Though preparation for executive-level leadership jobs was a goal of the NGL, several fellows said expectations for achieving that were unclear.

CPB’s request for proposals required “specific project success goals” focused on “participant employment” in leadership roles and goals “over the two years following completion of the program.” For Shepherd, the expectation that a fellow would move into a higher-level role, whether at their station or in another market, was clear from the application process.

However, KPBS’ Vera-Phillips said, “it seemed like the expectations changed as the year progressed; it went from getting experience to developing some kind of game plan to move into an executive position that may or may not exist.”

Toward the end of the year, the focus shifted toward developing strategies for securing new jobs, said Alvarado Núñez with WGBH. Public broadcasting executives tend to hold long tenures in their positions, so there are few openings for top-level leaders. Many of the fellows would have to uproot families to move to other markets for career opportunities. Figuring out those next steps could be a struggle, according to Alvarado Núñez and other fellows.

While two NGL co-executive directors and a CPB spokesperson all expressed commitments to the program, it’s unclear whether it will be renewed. Foundations like to be the first to start an initiative, Vecchione said, and finding a funder willing to support a second year has been difficult. She noted that the program has “generous support” from CPB and PBS.

“It seemed like the expectations changed as the year progressed; it went from getting experience to developing some kind of game plan to move into an executive position that may or may not exist.” — Kris Vera-Phillips, NGL fellow

“Maybe they would decide if we turned it around 90 degrees in some way or another that they would like to fully fund it again,” Vecchione said.

“We just recently learned of the loss of a key funder and are in early talks with WGBH about what that will mean moving forward,” a CPB spokesperson said in a statement.

CPB funded the first year of NGL with a $939,000 grant. The initiative marked a shift in CPB’s approach to training. A WGBH-led Producers Workshop, which taught production skills to budding filmmakers, lost its annual grant. CPB invested in a new documentary training program led by Stanley Nelson’s Firelight Media and issued a 2014 request for proposals for a training focused on programming leadership. WGBH’s proposal for Next Generation Leadership, developed with the Boston-based nonprofit The Partnership, won the grant.

CPB declined to answer questions about the funds it has invested in NGL or its future. The corporation plans to announce a new fellowship program for editorial leadership designed to provide specialized training for newsroom management.

For their part, the fellows said they hope to see the program continue and would like to support the next cohort of fellows. Several said that the year cemented their commitments to public media’s ethic of serving the audience.

NGL helped to sharpen their leadership qualities and develop negotiating skills, fellows said. The program boosted their self-confidence, taught them how to better advocate for themselves and others, and provided professional connections that will serve them for the rest of their careers. Each fellow was mentored by a public media executive and worked closely with an executive coach from The Partnership, which specializes in supporting diverse workforces. President Carol Fulp served as an NGL co-executive director.

“So much of success in our industry depends not just on the quality of your work but also on who you know, and who knows you and your work,” Stanford said. “Depending on your background, you might not know anyone, you don’t have those connections. NGL helped bridge that gap.”

Fellows said they appreciated attending the PBS Annual Meeting, many for the first time; hearing from various top system leaders; and shadowing a station executive for four weeks throughout the year. For example, Shepherd’s mentor was WNYC’s VP for news, Jim Schachter. The relationship helped Shepherd improve his time-management skills, he said. He appreciated sitting in on meetings where he was trusted to hear confidential information and could directly observe the challenges faced by executives at big stations.

Diversifying editorial leadership is an ongoing need within the system, according to NGL program leaders and a CPB spokesperson.

An analysis by Current in 2016 of CPB station survey data found that minority representation among officials and managers, as well as throughout the system, hovered at under 20 percent between 2011 and 2015. When minority-operated stations were excluded from the analysis, minority representation in leadership declined to roughly 13 percent. 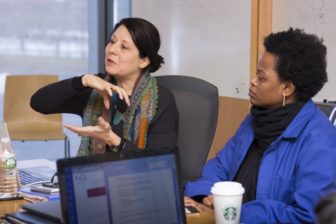 Fellows Patricia Alvarado Núñez and Shayla Harris participate in an NGL group meeting. Since the completing the fellowship, Alvarado Núñez advanced to a co-executive producer at WGBH while Harris became an independent producer.

CPB declined to provide updated data by Current’s deadline. It plans to release a new report on diversity in staffing, which will account for changes as of January 2018, early next year, according to a spokesperson.

“I don’t think any of the issues around diversity have to do with talented individuals of color,” Ramsammy said. “I think it has everything to do with the fact that the leadership at most stations and organizations today is predominantly white and male.”

If programs that prepare a diverse pool of talent for top leadership do nothing to change the system from within — as NGL seeks to do — there’s only one other way to address retention of people of color in public media, Ramsammy said.

“I think the real training needs to happen at the leadership level,” he said.

If NGL is renewed, Sandoval said he would hope to work to boost station involvement and to better manage expectations around time commitment and outcomes. Stations and fellows should understand that fellows will commit between 10 percent and 20 percent of their work week to the program. The program may not yield a direct promotion, but fellows should be positioned to move into leadership positions afterward.

While the fellows are charting varied career paths, many say they are primed and ready for top leadership. It’s just a matter of time, they say, and whether those opportunities will be available within public media.