Responding to a shortage of professional development and networking opportunities for women, Deanna Mackey of the Public Television Major Market Group has spearheaded the launch of three different programs aimed at mid- and early-career employees. And CPB is preparing to unveil a two-year training initiative for newsroom leaders later this month. 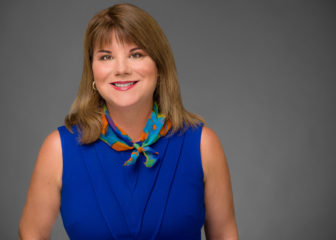 The need for training and professional development is increasingly acute, according to Mackey and other leaders who specialize in recruitment. Executives who benefited from an earlier era of CPB-backed management training are retiring, and the demand for leaders prepared to navigate the challenges of today’s public media system is growing.

“There has not been a consistent professional development program for our industry, nor one place that it lives and is sustained,” said Mackey. She developed training programs for PTMMG and Public Media Women in Leadership, a mentoring group she founded in 2015, with the hope of inspiring other organizations to step up and help fill the need.

This month PMWL launched two efforts: the webinar-based Advance initiative that offers certificates upon completion, and a Mentorship & Engagement project that may be the system’s first large-scale mentorship program, according to Mackey.

And PTMMG kicked off its Emerging Leaders program this spring for “rising stars … with potential to move into leadership positions,” Mackey said. Five inaugural participants from major-market stations met their first GM mentor “Buddies” this summer at the PTMMG meeting at WQED in Pittsburgh.

As public media expands its newsgathering, CPB is developing a fellowship program for newsroom managers. It plans to announce details later this month about Editorial Leadership Training, which will prepare 100 fellows to rise through newsroom ranks to leadership roles.

At PBS, meanwhile, a two-year foundation-funded program for new GMs has gone on hiatus, but PBS is pursuing collaborations to offer similar training. 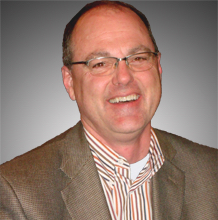 Tom Livingston, of the executive search firm Livingston Associates, said public broadcasting leaders must start discussing specific training needs of the system. Over the past 20 years, Livingston has made several attempts to centralize training. His most recent proposal focused on the need for succession planning.

“There is not any systematic, enterprise-wide conversation about training, let alone training resources for public media,” Livingston said.

The dearth of professional development opportunities also hinders diversifying public media’s workforce, Mackey said. “Boards hire people they know for the top jobs,” she said, “and traditionally this has tended to be white men. With no formal training or mentoring program where industry and board leaders can get to know rising stars, it’s hard to become ‘known.’”

Other system leaders also describe a need to define the training that will prepare future executives. Back when CPB invested in training leaders for the emerging public broadcasting system, “we had a sense that we had to learn stuff explicitly about us, inside of our bubble,” said Tom Thomas, co-CEO of the Station Resource Group. “Now there’s an increasing awareness of the array of leadership skills we share with other nonprofit organizations that also impact their communities, and we can benefit and learn from them in the same way that we now partner with them.”

Mackey has noticed that public media staffers often land in executive positions without experience in “all three of the three-legged stool of public media leadership skills: mission, revenue and technology,” she said.

People rarely learn all three areas “because many of our stations or organizations don’t have internal training programs to cross-train rising leadership stars to prepare them for the C-suite,” Mackey said.

She also realized that women working in public media are eager to advance into top positions. Before founding PMWL, when she appeared on public media conference panels, women in the audience would approach her about training opportunities or ask about the next panel on women in leadership.

So Mackey made leadership training a PMWL priority. The first Advance webinar launches Oct. 23. Subsequent webinars will focus on business, self-development and leadership/management. Tammy Carpowich, senior director of technology and innovation at KPBS in San Diego, Calif., and Veronica Varela Reyes of PMWL are leading the training series.

Mackey believes another initiative, the PMWL Mentorship & Engagement project that launches Monday, could be a model for the system. “As far as I know, this is the first large-scale mentorship program of its kind in the industry,” Mackey said.

The approach is two-tiered. Public media women leaders within five years of a chief executive–level position will be matched with mentors who are current or retired CEOs and COOs. The second tier targets early-career women who are looking for professional guidance; they will pair up with mid-level managers, department heads and directors.

“Boards hire people they know for the top jobs, and traditionally this has tended to be white men.” — Deanna Mackey

Mentors can be men or women but as the program launches mentees are only women, Mackey said. The initiative is supported by a three-year grant from the Wyncote Foundation. (Wyncote also provides grant funding to Current.)

The Emerging Leaders initiative is another of Mackey’s projects, approved last winter by PTMMG stations for their staffs. Each GM can nominate a promising staffer at their station who shows potential to move into a leadership position. From nine nominations, PTMMG selected five participants for the inaugural class announced in September.

The inaugural class will meet in person three times over the next year. Each will be matched with rotating GM “Buddies” for guidance, introductions and post-meeting mentorship. They’ll also chat with the GMs in monthly phone calls and network with other executives at PTMMG events. They complete the training by delivering presentations at a national PTMMG meeting.

At the first in-person gathering of the inaugural class, which coincided with the PTMMG summer meeting in Pittsburgh, Emerging Leader Laura Brandt, operations director at Detroit Public Television, was paired with Kliff Kuehl, president of KCPT in Kansas City, Mo.

Brandt said the meeting gave her ideas that she “immediately took back to DPTV and began talking to my colleagues about what we could test and/or implement.”

CPB has funded professional development initiatives that provide coaching or direct training, such as the 2016 Next Generation Leadership program that placed fellows inside major production organizations. The project, run by WGBH in Boston, sought to grow fellows into leadership positions as program executives.

CPB declined to discuss details of its editorial leadership program ahead of this month’s announcement.

The corporation identified the need for training by conducting an “assessment of editorial leadership capacity” in 2017, according to the project RFP. Newsroom leaders need to develop skillsets that include hiring and retaining reporters “of differing backgrounds and perspectives,” managing budgets, developing partnerships and “a deep knowledge of editorial standards and practices,” it said.

“As more stations build newsroom capacity, and initiatives such as the CPB-funded Regional Journalism Collaborations create new editor positions,” CPB said in the RFP, “this initiative will play an important role in ensuring that our newsrooms can produce the high quality, innovative journalism that underpins an engaged, informed civil society. Stronger editors make for better journalism.”

By building the leadership skills of 100 fellows, the initiative aims to accelerate change in public media newsrooms to better meet information needs of communities, grow the pool of qualified candidates and establish “ongoing training, coaching and support.” 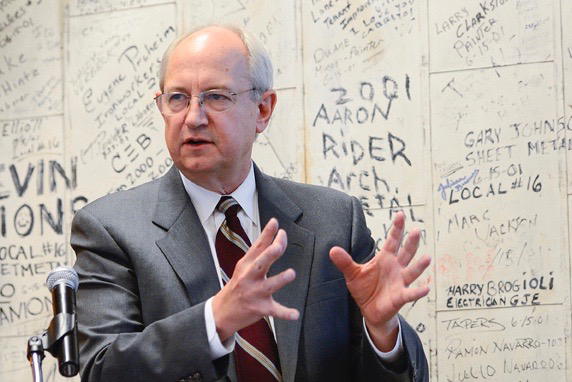 Thomas called the initiative “one of CPB’s biggest dives into leadership in years. Historically, it’s a huge pivot. They’re moving into a new territory. CPB is aspiring to help public media step into leading roles in local journalism, and they need leaders with the chops to do that.”

CPB served as the leadership training hub for public broadcasting back in the late 1970s and early ’80s, Thomas said. As the federally funded system was being built, the corporation sponsored executive leadership programs for promising public broadcasters at Harvard University’s business school and the Wharton School at the University of Pennsylvania.

“CPB, at that point, had fairly extensive investment in professional development at the top executive level as well as an ambitious program for women and minority station leadership,” Thomas said. The “Send your GM to Harvard” program paid for a multi-week course. And CPB paid half the salaries of women or minority senior-level executive hires, and covered costs of ongoing training. Those efforts were “effective but expensive,” Thomas said, and ultimately ended.

“CPB is aspiring to help public media step into leading roles in local journalism, and they need leaders with the chops to do that.” — Tom Thomas, co-CEO, Station Resource Group

In 2000 Livingston tried to address professional development for the next generation of leaders. He proposed to work with public radio associations on a leadership training program, he said. “We commissioned a survey; the need for training was at the top of possible priorities, but the willingness to pay for it, at the bottom.” Livingston said he was “unable to generate sustainable funding” to carry the idea forward.

Livingston tried again in 2008. This time, he partnered with Cheryl Head, former senior director of outreach and diversity programming at CPB, to establish a nonprofit, the Public Media Institute for Innovative Leadership.

Livingston wrote about the effort for Current in December of that year: “As a national institution, public media has the chance to establish a strategy for succession planning that not only tests the wisdom of local leaders but also draws on the experience of the entire system. Leadership training, more pervasive a decade ago in public broadcasting, is once more a good and smart investment.”

The proposal attracted startup grants but not enough funding “to really launch the effort,” Livingston said.

Aspiring pubmedia executives can find training outside the system, Thomas said. Ohio University in Athens offers a yearlong Public Media Masters program through a partnership of its School of Media Arts and Studies and WOUB Public Media. More than 130 public media leaders have graduated from the program since 1981, according to the university.

Another option is to enroll in nonprofit leadership programs that aren’t specifically aimed at public media, Thomas said. These programs address a wide range of competencies and capacities that top executives need in all types of nonprofits.

The response to PBS’ GM training program demonstrates the demand for professional development and networking designed for public broadcasters. When PBS offered training for station executives in 2015 and 2016, 39 new GMs went through the training, according to PBS.

“What we learned from that program was, participants really want to be connected to their peers and other GMs,” said Thomas Crockett, station services VP. “They don’t have a peer group within stations because they’re at the top.”

Though the foundation funding has ended, PBS is “trying to foster that connective tissue,” Crockett said, through ongoing GM orientations at PBS headquarters. Those meetings usually coincide with the CPB/PBS General Managers’ Strategy Meetings convened each fall. (This year’s orientation is scheduled for Oct. 25.) PBS also sponsors sessions and social opportunities for leaders to interact at PBS TechCon and the Annual Meeting, Crockett said. A GM track at PBS TechCon in April attracted 53 leaders.

The fiscal 2019 PBS budget notes that the organization is currently working with CPB, NETA, the Affinity Group Coalition and the PTMMG “to identify ways to enhance professional development and leadership training for general managers and emerging leaders.”

“It’s essential, I think,” Hyyppa added, “for leaders to build trusted networks of peers and mentors. There is great wisdom around our system, and a culture that is open and supportive, but it does require some proactive effort bring people together.”