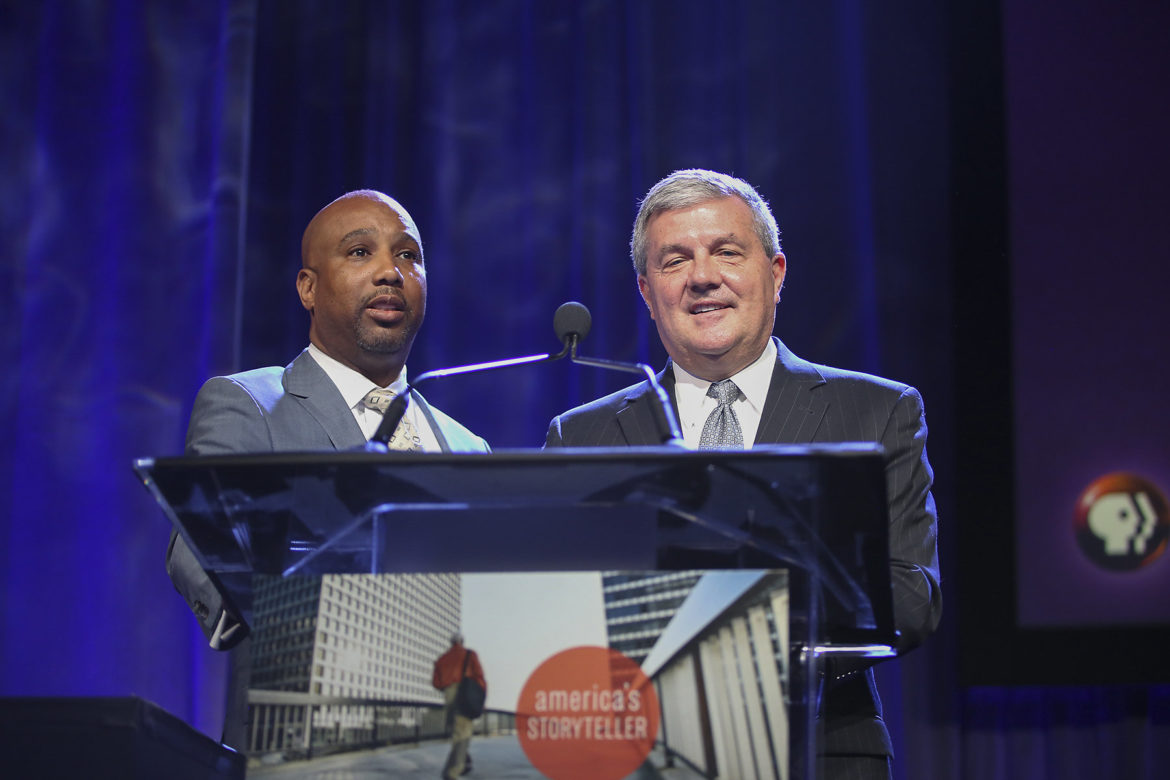 As g.m. of WYCC in Chicago, a station that’s participating in the FCC’s spectrum auction, he boasts 26 years of broadcasting experience that are about evenly split between commercial and public TV. Prior to WYCC, Buckner directed production operations for the Middle East Broadcasting Networks and was v.p. of production with WTTW in Chicago.

Buckner, who is African-American, describes his recent interviews as “very positive.” He and the hiring committees “tend to agree and like each other on a grander scale.”

It’s unclear why he hasn’t landed a new gig, but one thing is certain: As a person of color in public TV management, there are few leaders like Buckner.

In one application, for which he was never invited for an interview, he says, his competition included a white male who used to work under him and has less public media experience.

“When I got a call, it was a reference for him,” Buckner said.

Racial minorities — black, Asian, American Indian and non-white Hispanics — make up about 23 percent of the U.S. population, according to U.S. census data. When white Hispanics are accounted for, that percentage increases to about 38 percent. When compared with station survey data from the Corporation for Public Broadcasting, census data reveal that neither public TV leadership nor public radio comes close to looking like America.

CPB reports that minorities represent about 17.6 percent of full-time officials and managers in public TV, a figure that has increased from 16.9 percent in 2011.

When the 10 minority-operated stations, like WYCC, are excluded, minority representation declines to 13.7 percent.

According to the CPB data, public radio leadership is slightly more inclusive. Between 2011 and 2015, minority representation held steady at about 20 percent of officials and managers. But when the 57 minority-operated stations — including 28 Native American, 17 African-American, nine Hispanic and three multicultural — are excluded, minority representation hovers around 12 percent.

In TV broadcasting overall, minority TV news directors have reached a record high at 17.1 percent, according to a 2016 report from the Radio Television Digital News Association, which includes white Hispanics in its U.S. minority population.

However, minority general managers inched up a half percent to 8.6 over the past year, and half of the increase came from big four network affiliates, the report said.

Several public TV leaders of color say they all know each other and fit comfortably at one table during the 2016 PBS Annual Meeting in Chicago. Buckner and others estimate there are only 10 general managers of color at public TV stations, a job category CPB does not track. In 2015 there were 170 television licensees receiving CPB Community Service Grants that annually report their employment data, and they operate 366 stations. “There should always be someone different being introduced to the group, as opposed to all of us knowing who’s at the table,” Buckner said.

As the U.S. population becomes more diverse, racial diversity in hiring has become an increasingly important conversation in public media. It also underscores a founding principle of the Public Broadcasting Act of 1967, which created CPB as a nonprofit corporation with a specific mandate to invest federal dollars in ways that support diversity and excellence in service to “all citizens of the Nation.” Nearly 50 years later, public media has come under increasing scrutiny for its willingness and ability to reach new and diverse audiences that will assure its future sustainability and relevance.

“Our world is changing and, as public media organizations, we need to reflect that world — and it starts at the top,” said Michael Isip, senior v.p. with KQED in San Francisco.

According to the managers and executives interviewed for this story, some reasons for the lag in minority advancement are obvious: Barriers to entry have impeded minorities from pursuing careers in the system, leading to a small pool who persevere to become eligible for top leadership. But among those who work their way up within the system, some describe an exclusive good-old-boy network and gatekeepers who share a commitment to maintaining a status quo that clearly identifies insiders and outsiders. These obstacles also hinder their peers in other media, but public media was built to serve all of the public.

“There needs to be a much more conscious and conscientious approach to diversity in all levels, in every company,” said Liz Cheng, g.m. for TV at WGBH in Boston.

Each board operating local public media stations has its own internal dynamics and power structure. At times it can be difficult to pinpoint why certain boards dismiss candidates who appear to be more qualified than others, said Adam Livingston, c.o.o. of Livingston Associates, whose father, Tom, is founder and c.e.o.

“Would it be different if they couldn’t see the person?” Adam Livingston asked. “I think Tom and I are both optimistic enough to believe it wouldn’t change the outcome, but I can’t tell you 100 percent that that’s true.”

Several public media leaders and recruiters say that local boards play crucial roles in deciding who to hire as station managers, but they can be disconnected from the industry’s ongoing conversations about diversity. In seeking candidates to take responsibility for the financial stewardship of their local organization, boards tend to look for more traditional experience. In addition, governing boards themselves often lack racial diversity, and choose candidates they’re comfortable with or who look like them.

“It’s a system-wide issue to deal with systematically,” Tom Livingston said. “If the board is less diverse, the chances of them making a diversity hire would be less.”

When beginning a search, members of governing boards should ask themselves what they’re lacking in skills, audience reach and perspectives, said coach and consultant Robert Naylor. “If they can approach [a search] from that perspective, then they’re more likely to get someone who’s different from who they are.”

Over 20 years, and dozens of general manager searches, Tom Livingston says that boards are generally fair decision makers. “It’s not a universally wonderful experience, but for the most part it’s very positive,” he said.

One obstacle is limited mobility within public media management: Good jobs don’t open up very often. When Gary Stokes joined KSPS in Spokane, Wash., five years ago, he says he was the first new hire in seven years and the only person of color at the station. The average length of employee service was more than 20 years. “It wasn’t as if it was a closed shop; people liked it so much they never left,” said Stokes, who was hired to oversee development and later promoted to g.m.

Despite the challenges, candidates like Buckner press ahead. “There’s not much I can do about it but continue to put myself out there,” Buckner said.

With support from the CPB, Next Generation Leadership is among the newest programs to groom diverse high-level leaders. It’s jointly led by WGBH in Boston and The Partnership, a nearly 30-year-old Boston-area program for developing executives of color.

The yearlong pilot program launched in January with eight fellows selected from more than 90 applicants who participate in leadership sessions and receive executive-level coaching and mentorship. In addition, the fellows embed with their mentor’s station for four weeklong experiences to observe and contribute to a major project. Two areas that fellows have taken a particular interest in are learning more about how the system works and how to present themselves to lead a team that’s effective, said Judith Vecchione, co–executive director of the program. Organizers compare NGL to an executive MBA program, in which the fellows participate while continuing to work at their organizations.

“Visibility and access is key here, and making people aware that the talent exists,” says Carlos Sandoval, co–executive director of the program, “so we’ll see how all that plays out. We’re hopeful that the fellows will contribute to the system.”

It’s been a transformative experience for fellow Andrew Ramsammy, who says NGL equipped him with the skills and network to launch a consultancy, UnitedPublic Strategies, to advance diversity in public media. But while the program has given Ramsammy hope for the future, Isip, an NGL mentor, worries about its longevity and potential to change the system.

Ultimately, it will boil down to whether public media leaders are ready for the NGL fellows, Ramsammy said. Those who complete the program will be navigating a space where turnover is limited among top leadership.

“We can’t wait until the person in the next seat gets promoted,” Ramsammy said. “We need to be responsible for our destinies within public media. And sometimes that requires us to leave our own organizations.”

Cheng, who entered public media through a CPB grant program she says no longer exists, would like to see NGL implemented across the system. “Training programs are key to our future success,” Cheng said. “If we do not figure out a way to keep the diverse candidates we have, we will lose them to other platforms.”

Any systemic change will require genuine top-level and ongoing commitment to diversity and a willingness to have uncomfortable conversations, say several leaders of color. They also point to a difference between diversity and inclusion. While there may be people of color at the table, it’s important their voices are heard and not dismissed.

Marita Rivero, former v.p. of radio and TV at WGBH in Boston, advises seeking out other leadership opportunities outside of work and investing in family and community.

“People of color particularly need to make sure that they have a 360-degree experience of their lives,” said Rivero, now executive director of the Museum of African American History, in Boston and Nantucket, Mass. “It makes us more satisfied people, but it also gives us the kind of experience that our job may not be able to give us.”