A new survey from Edison Research and NPR finds that owners of smart speakers are using the devices for a significant amount of audio listening.

For the 2018 Smart Audio Report, Edison conducted an online survey of 909 Americans over 18 who own smart speakers. The research looked at how habits differed among “early adopters” — users who have owned a smart speaker for more than a year — and “early mainstream” users — those who had bought a device within the last year.

The survey found that owning a smart speaker leads to more listening to audio. Among early mainstream users, 70 percent said they have listened to audio content more often since purchasing a smart speaker, compared to 63 percent of early adopters.

Edison also found that respondents who have had smart speakers for at least a year said the devices were their preferred way to consume audio over platforms such as radio and smartphones. Smart-speaker listening is also cutting into consumption of other media, with radio losing the most time among smart-speaker users. 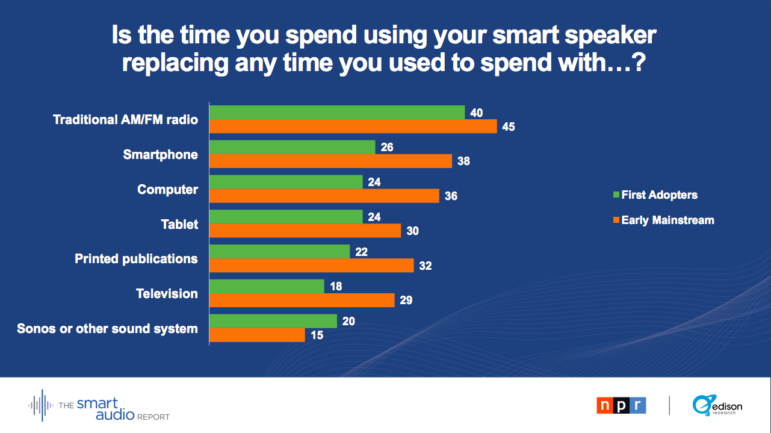 “News turns out to be a very important driver of audio on smart speakers,” said Tom Webster, SVP of Edison Research, during a webinar Wednesday about survey results.

Public radio stations and networks have been adding branded skills and features to smart speakers and experimenting with fundraising. Listening to NPR member stations’ live streams on Amazon Echo devices more than quadrupled from November 2017 to March 2018, according to NPR.