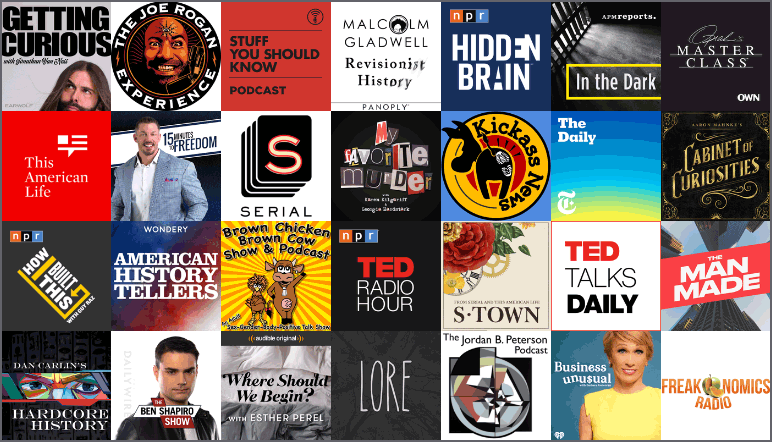 Making the iTunes Top Podcasts page is every podcaster’s goal. The chart is a continually updated list of the 200 most popular casts, based on downloads, subscriptions and a slice of Apple’s algorithmic secret sauce.

How many of these top 200 are public media productions? Which networks and which genres make the most popular podcasts? To answer these questions, I downloaded the iTunes top-podcasts feed, busted out my data-diving tools and began exploring.

First discovery: Comedy casts dominate. Almost 20 percent (39) of the top 200 listed “Comedy” as their primary genre. Quite a bit behind, tied for second place, were “News & Politics” and “Society & Culture” (27 each). 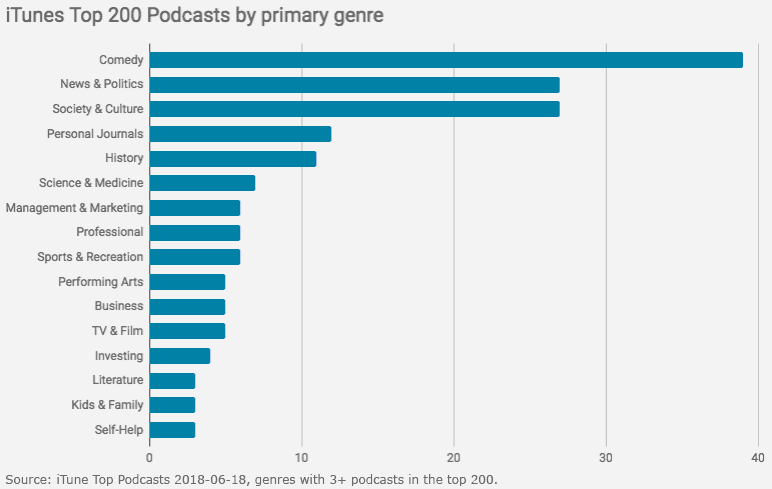 Fourteen of these networks had three or more casts in the iTunes top 200. Of those, six were public radio productions by a network, station or series. Pubradio-produced podcasts tended to place near the top of the chart: NPR’s 13 top-200 casts had an average rank of 61. The Ira Glass Empire’s three chart-toppers ranked sixth (Serial), seventh (S-Town) and ninth (This American Life). Serial is extra impressive: Their last cast was May 2016, yet their downloads still consistently rank them in the top 20.

Networks with 3+ podcasts in the iTunes Top 200

Do podcasters perform better than broadcasters? Who has more hits: commercial or noncommercial broadcasters? To find out I loosely grouped the networks by their main media type.

Here’s the big bucket for medium types. I made lots of judgment calls, so take these results with a grain of statistical salt:

iTunes Top 200 by type of network

Many of these networks fit into these smaller containers:

Notice how legacy media is kicking new-media butt. Five newspapers and one print magazine produced nine of the top 200 podcasts, while only three online-only news sites made the grade. Also, while public radio was a podcast hit-making machine, no public TV productions ranked in the top 200.

The above figures are just a snapshot of a single day in June. The iTunes top 200 churns often. For instance, the chart from a few days ago had only 57 percent of the podcasts that were on the June chart (the source of the above data).

One more statistical insight: Podcasts are indeed a freer medium than broadcasts. Foul language doesn’t seem to affect ranking, with 25 percent of the top 200 labeling themselves as “Explicit.” So, podcasters, say whatever the f*#k you want.

Thanks to iTunes Charts for cluing me into the iTunes RSS Feed Generator, which give you access to all of Apple’s current charts. I grabbed the XML-formatted data for their iTunes top 200 podcasts on June 18, then again, for comparison, July 9.

If a podcast listed multiple production agencies, I sometimes grouped them into multiple network-type categories. For instance, the “Artist Name” of two podcasts was “The New York Times and WBUR.” I included these casts in both “Broadcast: Public Radio” and “News: Print.”

For multiple-media networks, I used their original medium as their network type. So MaximumFun is grouped with podcasters and This American Life with broadcasters, though both make public radio series and podcasts.

I grouped some casts with their network rather than their artist name listed at iTunes (e.g.,”Radiotopia” not “Roman Mars”). The Google sheet with my data shows how I categorized — or maybe miscategorized — the 200 casts. YMMV.

This table has the raw data for the “By Genre” bar graph at the top of the page.

Now, a treat for you brave souls who waded through my tech talk: a final table of the two longest Artist Names in the iTunes Top Podcasts, both admirable examples of old-school SEO keyword stuffing: