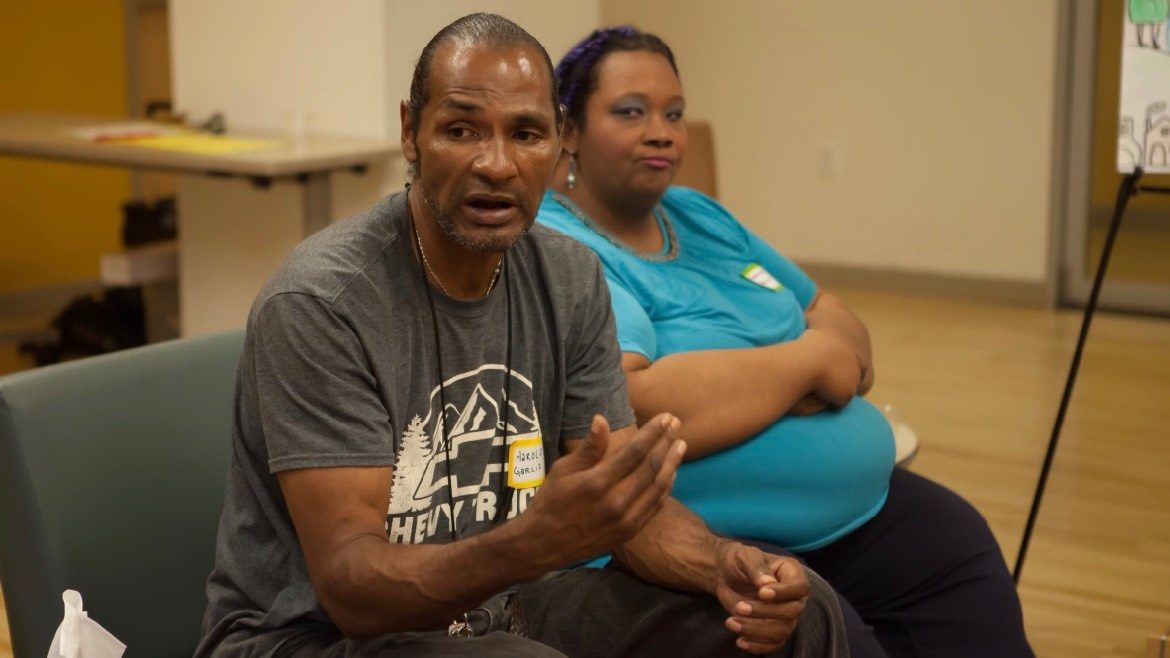 Participating in a Capital Public Radio Story Circle in August 2017, Harold Garcia describes how he survived on the streets. He now lives in an affordable housing community.

Like many cities across the country, Sacramento, Calif., is grappling with an affordable-housing crisis. We’ve had the fastest rising rents in the nation for two years in a row. We have record-high home prices, a skyrocketing homeless population and intensifying gentrification and displacement. We also have many neighborhoods of color that for years have been overlooked due to historic housing policies and a lack of economic opportunity.

In other words, residents from all walks of life in Sacramento are affected by the shortage of affordable housing, just in different ways. But there isn’t a place where this diverse range of community members can come together and find common ground.

Capital Public Radio, where I work as senior community engagement strategist, responded to the crisis by spending the past year digging into the history, politics and economics of housing affordability in California’s capital. We produced The View From Here: Place And Privilege, an eight-part podcast, hourlong radio documentary and online community platform.

To go beyond sharing content on-air and online, CapRadio tried something different. I organized “Story Circles” that brought wildly diverse residents face to face in intimate settings to talk about housing, hear one another and envision the way forward. It was an experiment in deep listening, radical hospitality and bridge-building. The results were astounding. 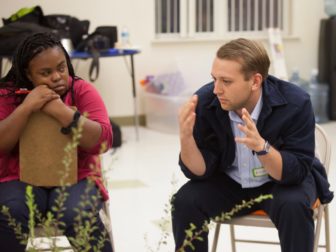 Story Circle participant Louis Mirante urges others to say “yes in our backyard” to new housing construction of all kinds during a September 2017 event.

A Story Circle is pretty much what it sounds like — a group of people sitting together and sharing personal experiences on a theme guided by a facilitator. In CapRadio’s Story Circles, I invited participants to tell a story about when having a home made a difference in their lives.

This deceptively simple process opened participants up to each other’s struggles, fears and dreams, creating an emotional intimacy and social bonding among people who usually wouldn’t be in the same room. Afterwards, group members explored what they heard and what it means. By the end, people saw both real differences and things their stories had in common. Most of all, they’d met people with different opinions, listened generously to their viewpoints and left with new insights.

One participant summed it up this way: “I’m coming away tonight with a more complete picture of Sacramento’s housing crisis because, frankly, there are a lot of people — people who experience homelessness, for example — that I don’t come in contact with in my daily life. And … hearing their stories and learning their struggles is, I think, a very important aspect that I didn’t have enough of before tonight.”

CapRadio partnered with 12 community organizations to co-host six Story Circles. I designed these events so that each gathering included residents with very different life experiences and perspectives on housing. Community partners brought homeless and low-income renters, social-service providers, activists who are people of color, affordable-housing advocates and developers to the gatherings.

CapRadio brought affluent, white homeowners — representative of our core audience — by marketing the events on-air and via our social media channels. I also recruited millennials from the regional YIMBY (Yes In My Backyard) group, business leaders, local government staffers and building-industry executives to participate in the Story Circles. We held these gatherings at affordable-housing complexes, community centers and public schools in low-income neighborhoods throughout Sacramento. 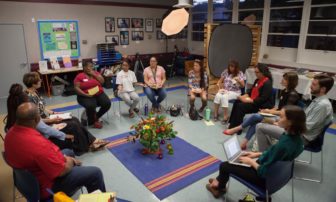 Story Circle groups were kept small to promote intimacy and honest storytelling. We set the chairs in a circle with flowers and candles at the center to spark interpersonal engagement and convey a beautiful and inviting atmosphere. (Attention to beauty, radical hospitality and intentional curation are three of my core strategies for encounter design.) CapRadio staff personally greeted guests and introduced them to others in the room as they got dinner and sat down, creating a welcoming and inclusive vibe.

The Story Circles were two-and-a-half hours long. They began with thirty minutes to mingle and share a meal, as well as an opportunity to participate in CapRadio’s storybooth: a mobile portrait studio where guests could have a professional photo taken and write down their views regarding housing and home. The Storybooth closed during the story-sharing activities and reopened after the closing reflection for anyone who had not had a chance to contribute their ideas. 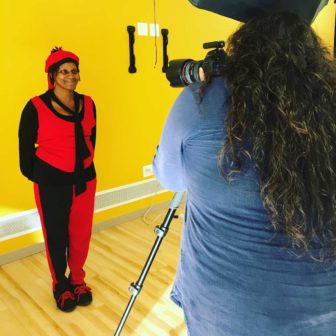 We collected the images and photos, sent participants complimentary copies of their portraits and posted images with text to the Community Voice section of the Place and Privilege website and on The View From Here’s Instagram feed and Facebook page. The vast majority of Story Circle attendees — 85 percent — participated in the Storybooth.

During the Story Circles, participants shared, in turn, a personal story illuminating the role of housing in their lives. Then they broke into trios to discuss themes and patterns. The full group reconvened to identify insights, epiphanies and action steps. To close, I recorded audio of participants reflecting on what they took away from the experience, and each completed a brief, anonymous survey. We offered everyone a flower from the bouquet and mobile phone wallets with personalized thank-you cards tucked inside as gifts.

We staffed the Story Circles with four people: a community partner, myself and two CapRadio community engagement interns. We all participated in setting up the events, greeting people and getting to know them. Our community partner began the events with opening remarks and told the first story. I facilitated the circle while one intern staffed the StoryBooth and the other took notes to share back with our newsroom and our project evaluator. Each event cost about $400 for food, flowers, supplies and child care.

Many participants said they appreciated the rare opportunity to explore ideas with people who are different from them. As one participant put it: “What I gained from this event was just really the multiple perspectives. I mean, to be honest, I probably wouldn’t be interacting with a lot of the folks here. I think just being put in a situation where everyone is kind of on equal footing you’re in this circle. You just kind of just chat it up. And after a few minutes it really feels like they are your neighbors or people you like.”

While each Story Circle generated unique stories based on the mix of community members present, common themes emerged across the events. The top three that Impact Architects identified included:

Commonality. Community members — whether dealing with homelessness, experiencing difficulty finding affordable housing or concerned generally about the crisis in the region — expressed surprise at the similarity of their experiences. Community members expressed a desire for more opportunities to have conversations across perceived divides in order to deepen this sense of commonality and shared humanity.

Stigma. Participants attributed society’s poor treatment of people dealing with homelessness to a lack of contact across socioeconomic lines and institutionalized racism. Community members said that society blames the individual, rather than looking at systemic factors contributing to homelessness, poverty and inequality.

Hope and determination. Participants said that the shared sense of belonging to a greater community and the empathy and interest they saw in their neighbors during the Story Circles gave them hope that together they can tackle the challenges associated with the affordable-housing crisis in Sacramento. Community members told stories about overcoming challenges with the support of family and community, highlighting the importance of these networks.

Designing those encounters takes effort, skill and resources. The question is: Are public radio stations game to shift resources from their newsrooms or hustle additional funds to make it happen?

Story Circle participants said they left with the feeling that there are solutions to the affordable housing crisis, as well as an increased sense that they could contribute to real, meaningful change. “I’m taking away hope that we can solve this problem,” one said. “… [I]t’s inspiring and encouraging to know that so many people are thinking about this. And I personally plan to get more involved, … contact public officials and … do my part more in the community than what I have.”

The Story Circle experience also increased participants’ sense of connection to CapRadio, something we are keen to do in this era of distrust in the media. Only 27 percent of those who attended the events were CapRadio members, and just 12 percent said CapRadio is their primary source of news and information. Twenty-seven percent had never heard of CapRadio. After the gatherings, over 80 percent said they were more likely to listen to the station, visit our website or attend upcoming events, while nearly 60 percent said they were likely to become members.

But here is my big takeaway. We surround ourselves — consciously or not — with voices and views that align with our own. We need Contact Zones like CapRadio’s Story Circles that bring people together across silos to engage in meaningful conversations about pressing social issues. Designing those encounters takes effort, skill and resources. The question is: Are public radio stations game to shift resources from their newsrooms or hustle additional funds to make it happen?

I’ve written elsewhere about Contact Zones and public radio’s unique position to create spaces for deep listening and community problem-solving. CapRadio’s experiment with Story Circles shows that we can design encounters that cause a shift towards empathy, often leading to a shared vision and collective action. These are the kind of outcomes that support democratic traditions and rebuild trust, not only among residents but also with the media institutions set up to serve them.

For more on Story Circles, take a look at the methods pioneered by Roadside Theatre, the work of the U.S. Department of Arts and Culture, and this leader’s guide to hosting Story Circles on racial healing and equity produced by the Winter Institute. My thanks to these groups for generously sharing their methods and experiences with me.

jesikah maria ross produces participatory media projects that generate public dialogue and community change. Her work brings journalists and community stakeholders together, creating a path and a plan that changes how we collect, tell and share the stories of our communities. Her work braids together citizen storytelling, documentary mediamaking and community conversations to produce on-air broadcasts, interactive websites and dynamic public storytelling events. She is the senior community engagement strategist at Capital Public Radio.