After 104 episodes, the founding host of our podcast The Pub hung up his headphones this month. But Adam Ragusea made sure to go out with a bang — an in-depth talk with Fresh Air host Terry Gross. And because she’s Terry Gross, the interview became a conversation in which she asked just as many questions of Adam. You can listen to the full episode for that portion of the interview; here are some excerpts of the ’cast before Terry grabbed the reins.

Adam Ragusea, Current: I was thinking about a good opening question for you, and in doing so it occurred to me just how different my job is right now from the job that you do on your show. This is, after all, a podcast; I do not have to try to appeal to a mass audience. I do not have to get people in on the ground floor of Terry Gross the way that you, Terry, have to get people in on the ground floor of, like, Amy Tan, and remind everybody that she’s The Joy Luck Club lady and all that kind of stuff. I don’t have to remind anybody listening about who you are and what your basic deal is. I just have to ask you whatever I want to ask you, ask you something that I’ve never heard you asked before, as opposed to asking you some of the de rigueur questions that everybody has to ask you. Do you ever wish that you hosted a little niche podcast and not a national radio show for precisely this reason?

Terry Gross: Well, I really want the best of both worlds. I want a national radio show that’s also a podcast in which I wouldn’t have to explain who my guests are. That world does not exist. Yeah, I know, I always do my interviews and feel like I have to explain who the person is and what they’ve done, because the book is brand new and no one’s had a chance to read it. Only a fragment of the audience will know who the guest is and, yeah, you have to bring all of those different audiences together, which means maybe being a little more general than I’d be if it was a specialty podcast. 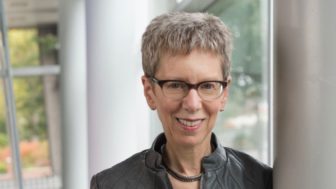 But that’s the price you pay for being able to interview people who are interesting, like jazz musicians and rock musicians and people in opera and people in the news and novelists and comics. There’s so many different worlds, and so I’m grateful that I could do a podcast that isn’t just specialized, because I think pop culture has become so fragmented and so boutiqued that I like the general aspect of it. Besides, it keeps everything interesting for me.

Gross: Because I get to talk to so many different people. If I was only interviewing writers, I fear I’d feel like I was asking the same writer-questions over and over and over in a way that you’ve expressed about the podcast when you gave your Opening Shot about leaving; it’s the same subject, but also you were tired of giving opinions all the time, which isn’t a problem I have since I keep my opinions out of it — outside of expressing my opinions about art and entertainment and TV and movies and stuff.

Current: Are you glad that you were born when you were born, and that you got to ride the public radio wave at the peak of its significance as an outlet of mass culture, as opposed to being born a few decades later and then riding the podcasting wave? Are you happy that you got to be around for the era of which you have been a defining force?

Gross: I think I wouldn’t have had a radio career had I gotten in later, because when I started, public radio was still so small that I was able to actually literally learn on the air. When I started at WBFO in Buffalo, there were maybe five paid people and a hundred volunteers. It was so easy to volunteer. They only hired enough people to get CPB funding because there was a minimum of full-time paid employees you needed.

I started as a volunteer on a feminist show, I had no experience, I was terrible on the air, I didn’t know what I was doing, and I managed to be able to keep doing it. Stations are professionalized now; you can’t start that way anymore. So I started when you could basically start knowing nothing.

And then, as I grew as a radio person, public radio kind of grew on a parallel path. When our show went national in 1987, there was no other daily national hourlong program out there, so we were able to carve out a place. It was when NPR was just starting to acquire shows from stations, so that really helped the show go national. So, yeah, I’m super-lucky, super-happy about when I was able to start.

Current: Let’s talk about some nitty-gritty production stuff. One of the things that I’ve always admired about Fresh Air — and been baffled by — is how even when you’re not there it still sounds like Fresh Air, which is weird when you consider that your show has no signature production elements or branded segments. It has a theme song, but I think you only hear it in the billboard. You don’t use it in your ins and outs.

Gross: We don’t use the theme anymore; we use different music all the time.

Current: Oh man! But even when Dave Davies or whoever it is hosts, it still sounds like Fresh Air, and I can’t figure out why. It’s just an interview show. Do you know?

Gross: Well, I never thought of it quite that way, but I think it has to do with, we kind of share a sense of what the interviews should do, that they should profile somebody in-depth, or give a solid overview of an important subject, an explainer kind of interview so that people can walk away saying to themselves, “Now I get it. Now I understand this complicated issue, and the next time I read an article about it I have a context to put it in.” Maybe that’s it. 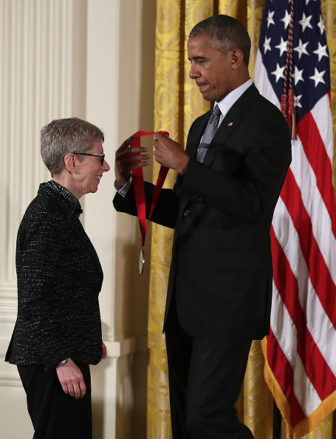 Gross receives the National Humanities Medal from President Barack Obama at the White House in September 2016.

Current: I bet a lot of people come to you and tell you their favorite Fresh Air interviews. What’s the Venn diagram like? Does that overlap with what are your favorite episodes, or do you say to yourself often, “Wow, I don’t even remember doing that one”?

Gross: Well, the strange thing is sometimes somebody comes up to me and says, “I was on your show,” and I sometimes don’t remember, and it’s sometimes because they weren’t on my show.

Current: They’re confusing you with Renee Montagne or something?

Gross: Yeah, I mean that kind of thing happens. But the one I’ve heard the biggest response about is the Maurice Sendak interview. And then an interview that happened that week, because it’s still fresh in people’s minds. And then people still ask me about Gene Simmons and Bill O’Reilly. But it’s actually unusual for somebody to bring up an interview from the deep past to say, “I remember that” or “I like that,” which doesn’t surprise me since I forget so much, too. Like if you asked me who was on last week, I’d have to think about it a minute.

Current: I don’t know where this was, but some magazine asked you to give your 10 favorite episodes or something, and I remarked at how most of them were from the last year. I was just like, “Oh, she suffers from Newsheimer’s like the rest of us.”

Current: I think I didn’t choose those. I think the staff chose those, the people on our show. I don’t really like making my own 10-best lists because it’s just hard for me to choose favorites. First of all, I see the flaws in all the interviews I’ve done, so that’s problematic. But then also there’s just so many of them my head starts to swim. I always feel like if you narrow it down to 10, I’m going to look at it and think, “Could have been better, huh?” I just don’t bother, and then I always feel like people who I really liked are going to be off the list because there’s only 10, so it’s just, I don’t know, I get a headache thinking about it.

Current: Another part of the formula is a lot of my favorite Fresh Air interviews are where you interview people who are really not public radio people. Even the Gene Simmons interview, which is so horrible, so obnoxious, it’s so much fun just to hear worlds collide like that. Do you like those?

Gross: That was a really interesting interview for me because he was so annoying and obnoxious, and I had to figure out how to behave. And I just started saying things like, “Wow, that’s really obnoxious.”

Current: Quite matter-of-factly, too.

Gross: I know it’s a very un–public radio moment in that respect, particularly since this was 20 years ago or something, so things weren’t as relatively loose as they are now, and it just didn’t sound like public radio at all with people insulting each other, calling each other names. Then we had to decide whether to play it or not.

Current: I’m glad you did.

“I started when you could basically start knowing nothing.” — Terry Gross

Gross: So am I. I’ve gotten a lot of mileage out of that interview. He probably really thought like, “I’m ruining her career.” It’s kind of just the opposite.

Current: You’re sort of the last woman standing in a lot of ways now of the defining generation of public radio personalities. The Magliozzi brothers are gone, Garrison Keillor is gone, Robert Siegel is going to be gone soon. Do you feel like the last keeper of the flame?

Gross: I feel like I’m older than what I used to be — that’s no secret — but I don’t feel like the last keeper of the flame in the sense that there’s so many different flames out there. I’m really excited by the fact that there are so many really exciting younger reporters and hosts on NPR now. I feel like things are changing, the stereotype of public radio as being this sedate group of white people who are older. I feel like if you’re subscribing to that stereotype, you’re not listening, you’re not listening to what’s actually going on on the air. So in that in that respect, I feel like I am one of the older people on public radio now, but hardly the keeper of the flame.