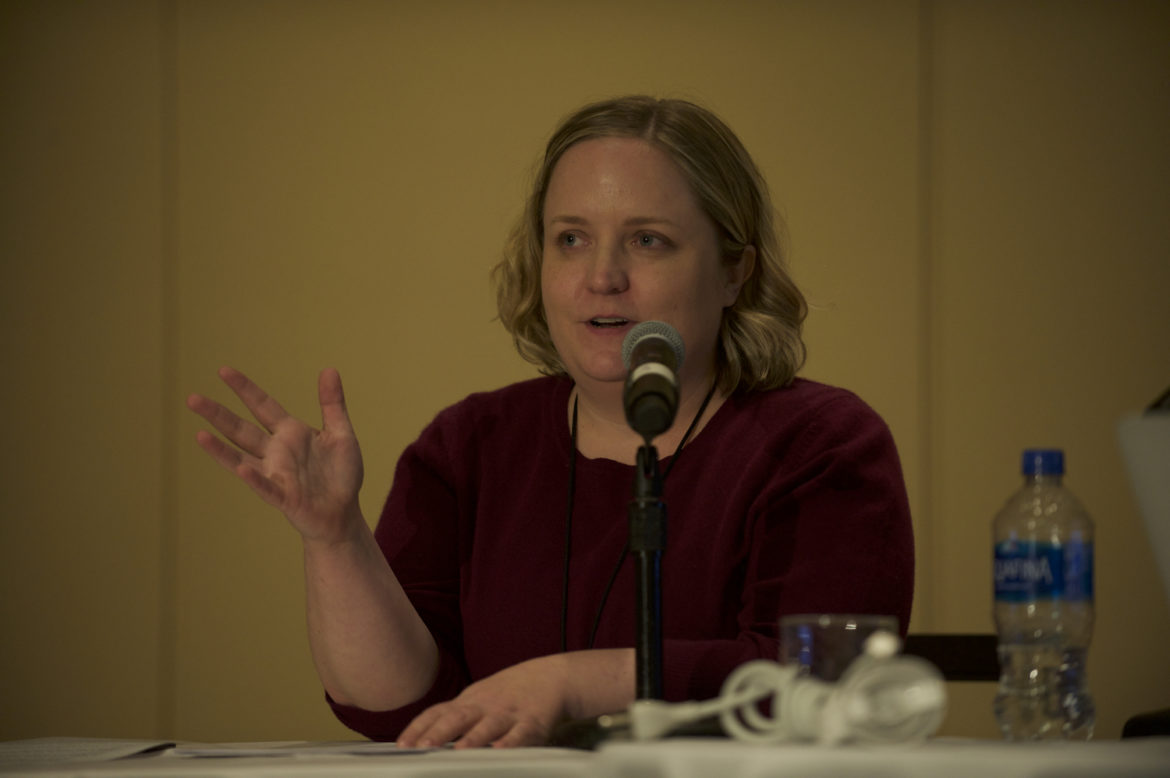 "In the Dark" host Madeleine Baran speaks on a panel Friday at the Third Coast International Audio Festival in Chicago.

CHICAGO — Before producer Samara Freemark began working on the podcast In the Dark, she thought investigative reporters were either geniuses with spreadsheets or people who waited in alleys for sources to share information.

“I had somehow got it into my head that investigative journalism is, like, this super-mysterious, really complicated and confusing thing,” she said in a session Friday at the Third Coast International Audio Festival. “Just something that mere mortals cannot do.”

But after working as senior producer on the Peabody Award–winning investigative podcast from APM Reports, Freemark is convinced that “we can all do this. It doesn’t involve any dark alleys at all, you guys.”

Freemark and co-panelist Madeleine Baran, host of In the Dark, argued that the key to investigative reporting is using a good question as the frame for a story

Framing an investigative story with questions is a simple idea but differs from the storytelling formula Freemark said she learned early in her reporting career. She was taught that “a story is about someone doing something for a reason,” she said. She used that frame for a lot of “very familiar public radio stories” about subjects such as service organizations building homes and educators lobbying for funding.

But reporters can instead ask, “Why is something happening? How is it happening? Is anyone to blame?” They also need to consider whether a question is worth pursuing, Baran said. “It actually has to be a question,” she said. “You can’t know the answer to it starting out. It can’t be a rhetorical question. You can answer it using the skills of journalism. It hasn’t been asked before, or it hasn’t been answered before. And it’s important.”

Finding something out “is exciting — it’s a quest. … It feels like a missed opportunity if you’re not trying to show that.” —Samara Freemark

The question In the Dark aimed to answer involved the unsolved case of Jacob Wetterling, a boy who was kidnapped near his home in St. Joseph, Minn., in 1989. When Baran moved to Minnesota, she had heard a lot about the Wetterling case and “assumed it was unsolvable.”

But about three years ago, she went down an internet rabbit hole and found a story that made her ask “Why hasn’t this case been solved?” The question went on to frame the series and led to new insights into a case that had been reported on extensively.

After finding a good question, reporters need to stay focused on answering it. Audio producers can lose focus because they have Freemark said.

When producers of In the Dark spoke with neighbors who lived near the crime scene the night of the kidnapping, they could have prepared a feature story about how the crime affected the people and the town, Baran said. But the focus on the question “Why hasn’t this case been solved?” instead led them to a previously unreported detail: that local law enforcement did not follow best practices when trying to solve the case.

To structure an investigative audio story, the journalists suggested “putting the process of discovery on tape.” A story built around answering a question benefits from built-in drama as the listener goes on a journey with the reporter to answer the question.

“We’re building up to this point where we’re going to find the answer to this question, and in an investigative story, we’re going to hold somebody accountable for it,” Baran said.

This method of telling an investigative story is also useful because it gives listeners insight into the process and helps reporters show their work. And finding something out “is exciting — it’s a quest,” Freemark said. “… It feels like a missed opportunity if you’re not trying to show that.”

In a session all about questions, the journalists left one unanswered: When will the next season of In the Dark be released? Season two, which will take up a new question, is in the works, they said, but a release date has not been set.

One thought on “‘In the Dark’ creators demystify investigative audio reporting”