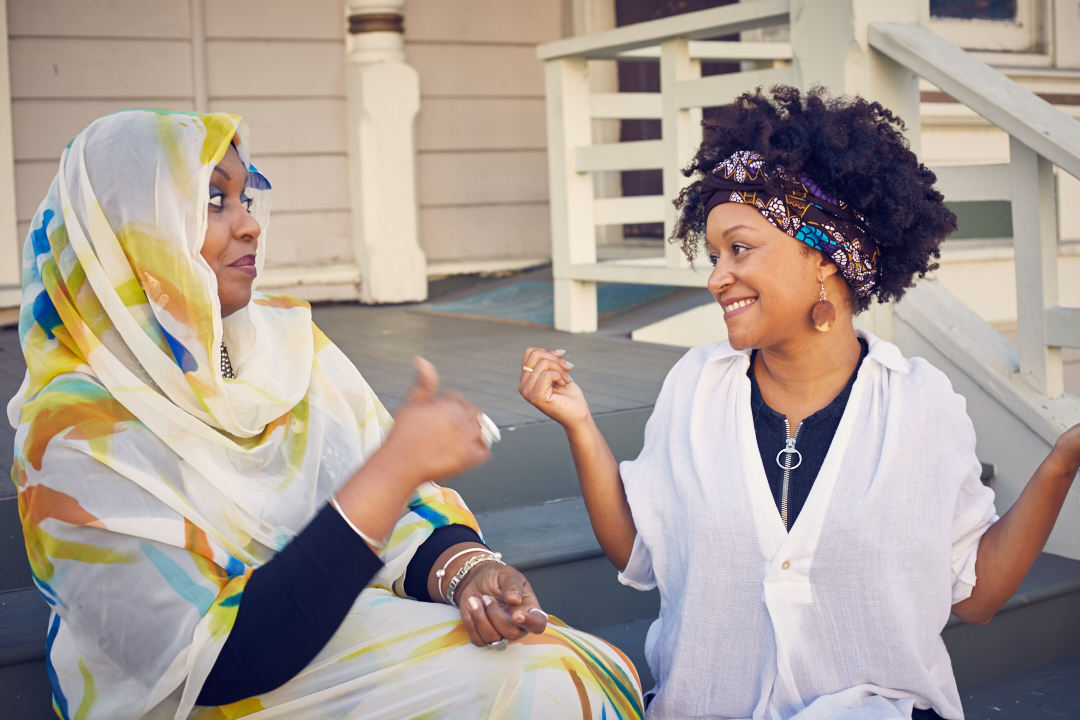 Hana Baba and Leila Day are co-hosts of “The Stoop.”

As journalists in public media, Hana Baba and Leila Day are used to being among the only black people in newsrooms.

So when they met five years ago at KALW in San Francisco, they found themselves having water-cooler conversations about subjects such as beauty, mental health and media representations of black people, prompted by articles they read in publications geared toward black audiences.

They shared common ground as black women but found that their perspectives also differed. Day is African-American, and Baba is Sudanese-American.

“We were connecting on these different levels, but at the same time there were points where it would be like, ‘Hey, wait a minute. We are from very different communities,’” Baba said. 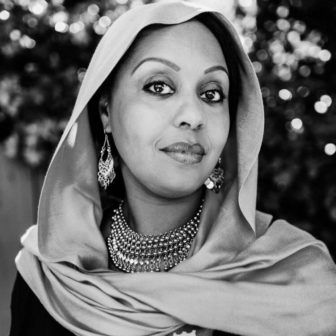 They couldn’t find a way to get these conversations on Crosscurrents, the newsmagazine they worked on together. Baba hosts the show, and Day was a producer and editor. But the duo has now found a home for these discussions. Their new podcast The Stoop presents what they describe as honest, frank conversations about black identity.

The pair developed the podcast through NPR’s Audio Storytelling Workshop, and it was one of three programs to receive $10,000 from NPR through the network’s Story Lab, an incubator for newsroom experiments.

“We picked The Stoop because it was a smart concept hosted by two incredibly engaging public radio reporters,” said N’Jeri Eaton, NPR senior manager of programming acquisitions, in a statement. “From the very start, Leila Day and Hana Baba have demonstrated that they can talk about taboo subjects with intelligence, intimacy and humor.”

The pair also received a $30,000 grant from the California Humanities Documentary Project to produce the show. Their first episode premiered as an installment in NPR’s Code Switch podcast July 19. Another collaboration is in the works with Al Jazeera’s digital division, where Day is now senior producer for podcasts. Julie Caine, now EP of audio at Al Jazeera, helped edit the podcast as a managing producer at KALW.

Baba and Day led a podcast workshop with representatives from NPR and St. Louis Public Radio Wednesday during the National Association of Black Journalists conference in New Orleans. They’re among rising black talents in public media nominated earlier this year by Current’s readers. Read more about the other nominees. 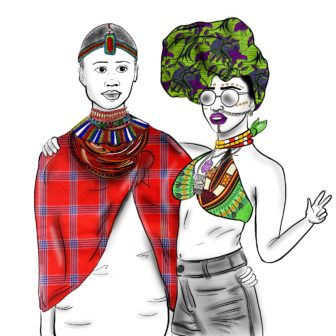 The Stoop’s first episode focuses on tribal wear and asks, “Is it appropriation when African Americans wear African clothing?” When generating story ideas, the duo considers “conversations that we would have in my Sudanese community that if Leila comes in, we would stop that conversation,” Baba said.

But the podcast covers more than just relationships among Africans and African-Americans. It also deals with the range of experiences among black people, asking tough questions that the hosts explore from different angles and don’t claim to resolve. In their second episode, they ask why it’s difficult for some black people to say “I love you.”

They’re finding that The Stoop’s audience isn’t limited to black listeners. “When we started this, I feel like both Hana and I thought we’re going to make this because it’s in our gut, it’s in our heart,” Day said. “These are stories we want to tell, and we just assumed the audience would most likely look like us: black women with abs of steel,” she joked.

“But we’re also hearing from some of our white colleagues, ‘We are loving being flies on the wall in these conversations,’” Baba added. “It’s also for the curious white person who wants to hear these intimate, frank conversations that happen behind closed doors.”

Because public media’s audiences are largely white, Baba and Day plan to collaborate with other media outlets and find ways for The Stoop to reach a “browner audience,” Day said.

The women bring a warm interplay to their roles as co-hosts, developed throughout their friendship. But they say that on the podcast, finding a sweet spot between sounding like journalists and close friends was difficult. “I personally had a fear of not being taken seriously for being casual,” Baba said.

During a phone interview, they recast my question about their individual talents to gush about each other. 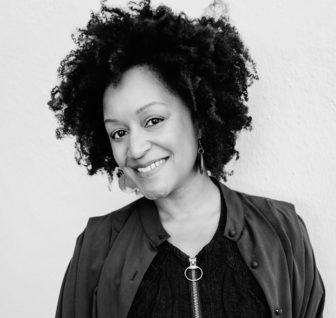 “Leila is a very deep, thoughtful person, and she’s very careful in her reporting,” Baba started. “She’s really thoughtful of format and style, and she has this ear … she recognizes these spots where it might be bumpy. That’s talent.”

“Oh my God, that is so nice,” Day said. “We should start our meetings like this, Hana.”

“It cuts off when it’s time to shower praises on me,” Baba said.

“I tried to bail on that one,” Day answered eventually.

“This is a Stoop episode,” Baba said. “Why can’t African-American women say anything good about African-immigrant women?”

After more lighthearted joshing, Day said, “I can look at a script, and I have no idea of how to do this back-and-forth banter that will sound natural and normal. It just amazes me how naturally and quickly that comes to her.”

Day and Baba will release new episodes of The Stoop biweekly through October and hope to produce more episodes beyond that point.