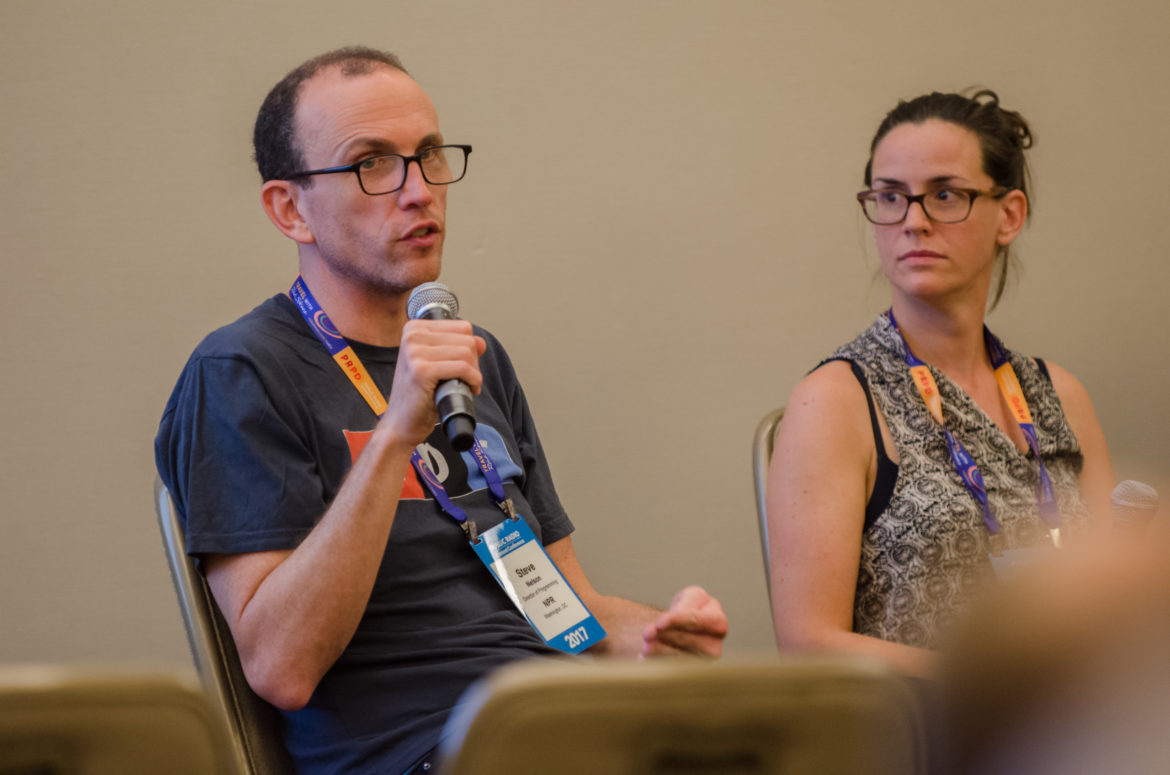 The group, which included producers of WBEZ’s Making Oprah, New Hampshire Public Radio’s Civics 101 and Minnesota Public Radio’s 74 Seconds, shared tips on how other podcast producers can follow their leads in coming up with the next big hit. And to no one’s surprise, everyone seized the opportunity to plug their work.

There’s no formula for making a good podcast, said Steve Nelson, director of programming at NPR. In his experience launching shows at NPR and American Public Media, Nelson said, he’s learned the importance of knowing your audience and having something distinctive to say. The podcast market is crowded, so producers should know what sets them apart, whether it’s great talent, an amazing story, a strong brand or local connections, Nelson said.

NHPR’s Civics 101 had that special sauce Nelson described. The station serves a purple state that holds the nation’s first presidential primary. NHPR staffers and listeners were tired of horse-race coverage after last year’s election, said Maureen McMurray, director of content innovation and audience development. Then an NHPR staffer asked, What does the White House chief of staff actually do?

Brainstorming about how to address such basic questions evolved from developing a segment to a show to a series to a podcast. Initially, Civics 101 was supposed to run only during President Trump’s first 100 days. But it took off, with NHPR collecting more questions from listeners than it had anticipated.

“We started getting questions that were responding to the news,” McMurray said. “It’s a show that oddly has become not news-breaking but really timely.”

The podcast’s biggest audience may be in Washington, D.C., McMurray said. It also draws a lot of listeners in Canada and Britain.

Find a local story with a national audience

WBEZ’s Making Oprah launched in November 2016 and has had a “weirdly long tail,” said Joel Meyer, WBEZ’s EP of talk programming and podcasts. Host Jenn White moves between a serious hosting voice to sharing her unbridled excitement about interviewing Winfrey. Throughout the show, the audience got to know White’s many sides.

Jonathan Blakley, PD of MPR News, noted that White doesn’t have the typical perceived public radio voice, so it was a “big deal” for her to introduce WBEZ to outsiders.

“I think that it was one of the most delightful moments I have heard in podcasting in a long time,” panel moderator Lauren Ober, host of WAMU’s The Big Listen, said of the moment White learned she would interview Winfrey. “I am guessing that nobody else could have made that but your shop.”

“One of the many things that gets upper management excited is when you say, ‘This is going to be on the radio, too.’” —Jonathan Blakley, MPR

Meyer said he felt WBEZ was making the podcast for women like White, who grew up watching Oprah. But many of the TV personality’s earliest fans don’t remember the challenges or environment she faced starting out. The idea for the podcast sprung out of a local news story. Harpo Studios was being torn down to make way for a McDonald’s headquarters.

“It’s been 30 years since the start of the show,” Meyer said. “There’s this news event going on in the city with the teardown of the building. What should we do?”

The station had just hired a full-time podcast producer, doubling its podcast staff to two, Meyer said. The team needed something for him to do. Making Oprah turned into an eight-month project that felt like a “very Chicago story,” Meyer said, while also speaking to the importance of TV talk shows to the city in the ’70s and ’80s.

Without resources, a podcast won’t be good or sustainable, Nelson said. MPR’s podcast 74 Seconds covered the shooting of Philando Castile, a local story that drew national attention. Making the podcast took resources from MPR’s newsroom, but no other story was as important, Blakley said. Rather than having its powerhouse anchors host the podcast, MPR relied on two reporters who had been covering the story.

“We knew that we could tell this story during Morning Edition and All Things Considered in our news breaks … or we could go a little deeper,” Blakley said.

Since launching in May, the podcast has transitioned from covering the trial of the police officer who shot Castile to focusing on the shooting of an unarmed woman in July and broader issues around police violence.

The podcast has helped MPR reach new and far-flung audiences, including people who hadn’t heard of the network, Blakley said.

Ask what you already do well

NPR’s Nelson said stations can develop podcasts by asking, “What is the stuff we already do really great?”

“Something like 50 percent of the people who listen to [NPR’s morning news podcast] Up First don’t listen to Morning Edition on the radio,” Nelson said. “They are coming to National Public Radio and hopefully to your stations.”

“That was a really great plug for Up First,” Ober said.

Panelists laughed and poked fun at Nelson, asking what the hashtag is and where to find it. Nelson went on to plug another show, What’s Good with Stretch & Bobbito.

What’s your strategy in determining which podcasts you’re going to greenlight? Ober asked.

The podcast has to be sustainable and unique, but management and sponsors need to buy into the idea, McMurray said. NHPR aims to invest in ideas that reach an audience beyond New Hampshire. That could take the form of content for both broadcast and podcasts based on questions submitted through Hearken, the crowdsourcing platform that invites listeners to tell the station what to cover.

“One of the many things that gets upper management excited is when you say, ‘This is going to be on the radio, too,’” Blakley added.