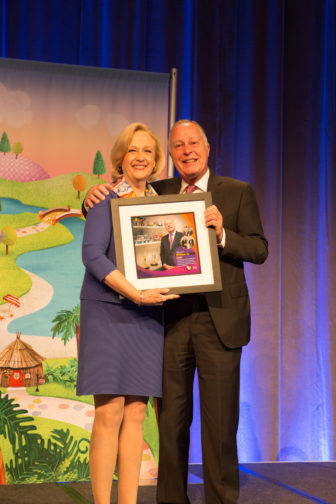 Early childhood educator William (Bill) H. Isler received the PBS “Be More” Award for helping to bring characters like Daniel Tiger to life. The award was presented during a breakfast celebrating the legacy of Fred Rogers in public TV’s educational programming for children.

Isler worked with Fred Rogers and served as president of The Fred Rogers Company from 1987 until he retired in 2016. He worked on Mister Rogers’ Neighborhood and led the company through the launch of programs including Daniel Tiger’s Neighborhood, Peg + Cat and Odd Squad.

Rogers showed that “television for children could be respectful of their intellect and meaningful to their lives,” said Linda Simensky, VP of PBS Kids programming. “It was a radical idea at the time.”

In remarks at the Annual Meeting, Isler applauded PBS for maintaining high standards for children’s media and providing quality programming on broadcast and digital platforms. The longevity and success of The Fred Rogers Company is due in part to PBS’ efforts, Isler said.

“… Fred used to say … who else but PBS would allow Fred Rogers and Julia Child to be themselves on television?” Isler said. “No actor, no actress, just doing what they love in front of the camera.”

The “Be More” award “celebrates individuals who embody the spirit of helping all Americans to discover more, to experience more and to ‘Be more,’” according to PBS.

Isler “is one of the passionate and effective leaders I’ve ever had the privilege to know,” Kerger said.Tears were in Isler’s eyes when he joined Kerger on stage.

East Tennessee PBS in Knoxville was honored with the Corporate Support Award, which recognizes leaders for success in securing new sources of corporate revenue, incorporating new techniques, or developing innovative strategies and targeted marketing efforts. East Tennessee researched children’s viewing habits and identified a need to serve children with educational programming via PBS’ new channel of kids programming. The station created “packages and strategies to welcome seven new sponsors and generate $28,000 annually over a five-year period” to fund the service, according to a PBS press release.

The Membership Award was presented to WHYY in Philadelphia. The award recognizes membership strategies that have grown revenue, donor files or prospect pipelines, as well as new engagement activities resulting in increased giving.

WHYY was recognized for its “commitment to black history content as a catalyst for acquiring new members,” according to a press release. The station used special content to grow and diversify its membership. In 18 months, “WHYY acquired more than 3,500 new donors, prospects and members through a combination of pledge events and community engagement, including screenings, panel discussions and historical tours,” according to a PBS press release.

Community Idea Stations in Richmond, Va., was named the Philanthropy Award winner. The award recognizes fundraising efforts that make stations more financially sustainable. Community Idea Stations received recognition for a major-giving program that saw a 139 percent increase in number of donors giving $1,000 or more and a 99 percent increase in revenue over a five-year period. The revenue has helped fund community outreach, TV productions about local issues, and three documentaries, including one that aired nationally, according to PBS.

Georgia Public Broadcasting won the Special Achievement Award recognizing successful projects that have a broader organizational or community reach or are multidisciplinary. GPB won for a multiplatform fundraising approach. The station “refined internal operations and changed its staff structure to give more team members a stake in development goals,” according to PBS. It also changed performance ratings, basing them  on overall organizational fundraising success rather than individual goals.

The effort led to growth in development revenue from $4.8 million in fiscal year 2013 to $7.4 million in FY16, according to the release. The station’s sustainer program grew from $264,000 to more than $1.1 million, with the aim of persuading half of all donors to become sustainers by 2018.

“Since our founding, development has served as the backbone of public media, ensuring that we have the resources and capacity needed to deliver on our mission today and in the future,” Kerger said in a statement. “We are thrilled to recognize East Tennessee PBS, WHYY, Community Idea Stations and Georgia Public Broadcasting for their innovative leadership in fostering deep local support to sustain public television’s public service mission.”

The organization that sets standards for digital television transmission honored Skip Pizzi Wednesday with its Bernard J. Lechner Outstanding Contributor Award, TV Technology reported. The annual award recognizes a member who has made significant technical and leadership contributions to the organization.

Pizzi, a former NPR engineer and technical director, holds leadership positions in ATSC, the National Association of Broadcasters and other organizations.

“Skip Pizzi is an outstanding leader with remarkable technical and management skills,” ATSC President Mark Richer told TV Technology. “His enthusiasm and commitment has helped to facilitate the rapid development of the next-generation broadcast television standard.”

Pizzi was presented with the award during the 2017 ATSC Next Gen TV Conference at the Ronald Reagan International Trade Center.

NPR’s David Folkenflik was presented with the Bart Richards Award for Media Criticism Thursday at the National Press Club in Washington, D.C. The annual award honors work that “evaluates news media coverage of significant subjects or issues,” according to the university.

Folkenflik was recognized for the “rigorous reporting” and “storytelling style” demonstrated in his journalism throughout 2016. The university cited his coverage of CNN’s unexpected profits from saturation coverage of Donald Trump. It also pointed to his reporting on 21st Century Fox’s decision to fire Fox News Chairman Roger Ailes for sexual harassment. Folkenflik has served as NPR’s media correspondent since 2004.

“Folkenflik has chronicled the challenges, achievements, and failures of the news media during a critical period with deadline grace and, despite comedic touches, a seriousness of purpose,” Carruth told PSU. “He has grounded his reporting in the conviction that people need to be equipped to be citizens, not merely news consumers, and that they cannot without a vigorous press. Early on, David identified the forces that shaped the media’s role in the presidential race and beyond: the collision of power and journalism, money and truth.”

Congratulations to @NPR's @davidfolkenflik, who was presented with our Bart Richards Award for Media Criticism tonight at the @PressClubDC. pic.twitter.com/J6GZDB5Wto

The award honors broadcasters reporting outside of the top 16 television markets and print or digital journalists from outlets with a circulation of less than 150,000. Winning journalists have distinguished themselves with reporting providing breadth and depth in coverage of a topic or topics of significance to people in the African diaspora, according to NABJ.

“She is committed to storytelling that reflects the issues and inspirations in the black community,” NABJ President Sarah Glover said in a statement.

As WUNC’s race and Southern culture reporter, Inge explores “modern and historical constructs to tell stories of poverty and wealth, health and food culture,education and racial identity,” according to NABJ. The station created the position to take advantage of Inge’s talents and experience covering issues of inequality, race, and police and community relations. Her recent work includes “Perils and Promise,” an in-depth series about the challenges public schools, community colleges and universities face in serving rural areas.

“Leoneda truly enlightened and educated our audience on a variety of historical and pressing stories throughout the year,” WUNC Managing Editor Dave DeWitt said in a statement.

Inge will be honored during NABJ’s Convention and Career Fair in New Orleans in August. 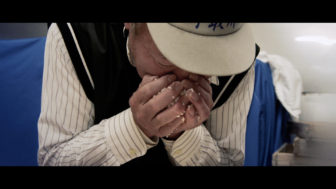 Yamamoto Toji checking Koji rice in The Birth of Saké, a documentary film by Erik Shirai.

Winners in the foundation’s Broadcast Media Awards competition honoring excellence in culinary writing and journalism were honored at a gala May 1.

The POV film The Birth of Saké, which aired on PBS, won in the documentary category. It was directed by Erik Shirai and produced by Masako Tsumura.

The National Institute for Health Care Management Foundation is awarding All Things Considered, NPR and Ohio Valley ReSource with its Television and Radio Journalism Award for “Advanced Black Lung Cases Surge in Appalachia.” The team included NPR’s Howard Berkes, Robert Little and Nicole Beemsterboer and Benny Becker and Jeff Young with Ohio Valley ReSource. They investigated the impact of black lung disease on coal miners, finding its incidence to be ten times higher than federal researchers had reported. Their coverage prompted Congress to study the issue, according to NIHCM.

The black lung investigation also won a 2016 Sigma Delta Chi award from the Society of Professional Journalists for investigative reporting in the category of 1-100 market or network syndication, radio.