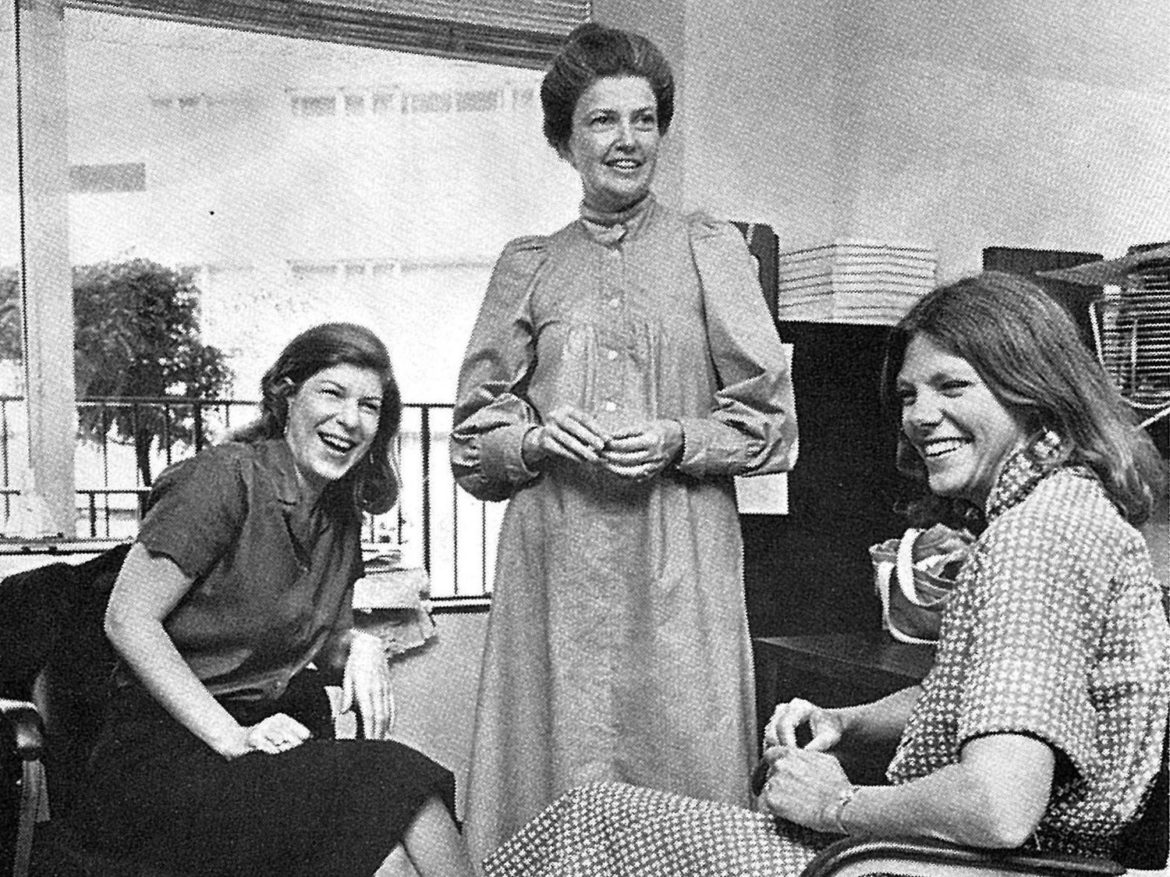 Nina Totenberg, Linda Wertheimer and Cokie Roberts, photographed here around 1979, were among the prominent female voices on NPR in its early years.

Public radio faces another period of uncertainty as a new administration in Washington sparks fresh concerns about federal funding for the Corporation for Public Broadcasting. NPR has long been a lightning rod for right-wing attacks on the media, in part due to its receipt of (modest) public funds. To many of its conservative detractors, however, NPR simply sounds liberal, in part because of its historic commitment to “many voices, many dialects,” in the words of Bill Siemering, NPR’s first director of programming.

In particular, the centrality of women’s voices in establishing NPR’s distinctive sound serves as important context for thinking about the cultural and political significance of the network today. Given the unprecedented role that gender politics played in the last election, it might be worthwhile to reflect on the role of women’s voices in making public radio so threatened and, perhaps, threatening.

To listen to NPR today — and really for most of its 47 years — is to listen to the voices of women. Or, to put it more precisely, the voice of NPR has very often been a woman’s voice. Since the 1971 debut of All Things Considered, the voices of women as news anchors and hosts, more often than those of men, have narrated, announced and authored the news and cultural programming that make up NPR’s daily representation of America and the world.

This is remarkable given the history of hostility to women’s voices on the air, especially in “non-performing” roles, throughout the history of U.S. broadcasting. Media scholar Susan Douglas argued persuasively in Listening In, her 1999 history of U.S. radio, that “tuning and retuning certain versions of manhood” has been a central preoccupation of radio from the very beginning. The effective “ban” on women’s voices in roles of authority on network radio from the late 1920s into the 1970s was an extension of a far longer history of silencing women’s voices in public. Susan Stamberg’s status as an early voice of NPR  represented a challenge that is impossible to understand outside the context of political and social change that enabled it and that it came to represent.

Stamberg, a founding staffer at NPR and All Things Considered’s host for 14 years starting in 1972, epitomized in many ways the founding principles of NPR (notwithstanding its masculinist language): “to regard the individual differences among men with respect and joy, rather than derision and hate … to celebrate the human experience as infinitely varied, rather than vacuous and banal … to encourage a sense of active constructive participation, rather than apathetic helplessness.” The interviews and the stories she helped to craft reflected the network’s early enthusiasm for the unruly ambient sounds of the street and everyday life. Stamberg’s voice, warm and immediate, evoked the network’s humanism and its idiosyncratic curiosity for the quirky pleasures at the margins of news stories. The first woman to anchor a U.S. newscast, she was, as Linda Wertheimer wrote in Listening to America, “the voice” we most associate with NPR. 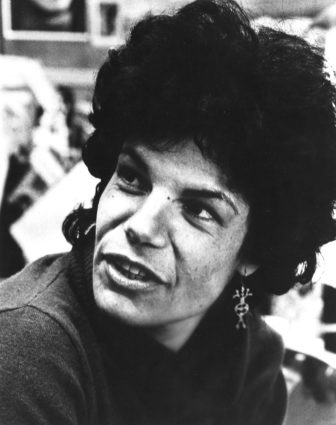 Stamberg, in a 1981 NPR publicity photo.

Stamberg’s voice was also a source of controversy. In his 2005 book Listener Supported: The Culture and History of Public Radio, Jack Mitchell, ATC’s first producer, writes that her voice was unpopular with some station managers, strangely “ethnic,” “off-putting” to some listeners, “too New York,” “too Jewish,” unprecedented for a national anchor. And yet it was very much of its historical moment. Stamberg has said that Siemering found in her “the voice he had heard in his head for the new show.”

From the start, Siemering’s commitment to a network that spoke in “many voices, many dialects” was a challenge to a model of authority based in the bland bass and baritones of the white, Anglo-Protestant broadcasters of old. It is hard to imagine a time much before 1972 when a voice such as Stamberg’s could become the signature sound of a national news network. Immigration policy and ambitious federal programs dedicated to public institutions of education, the arts and media created the conditions in which a new cosmopolitan-minded public broadcasting service that spoke in many voices and dialects was possible.

The gains wrought by the 1964 Civil Rights Act, which outlawed workplace discrimination based on race and sex, contributed to Stamberg’s pioneering achievement as the first woman news anchor in the country and to the leadership positions taken up by Linda Wertheimer, Nina Totenberg and Cokie Roberts at NPR in the 1970s. The low pay offered to the staff of the fledgling and chronically underfunded network meant that many men in broadcast journalism steered clear, observes Lisa Phillips in her book Public Radio Behind the Voices. This meant low-paid opportunities were open for women who couldn’t get hired elsewhere because of lingering, though newly illegal, discrimination.

These women epitomized another important cultural current: the rising women’s movement of the 1970s, which would carry white women’s voices, real and metaphorical, into sites of public authority and audibility that had been exclusively male. Wertheimer was the first woman to anchor network coverage of election-night returns in 1976. Stamberg was the first journalist to moderate a call-in program with a sitting president, Jimmy Carter, in 1977. In 1979, she broadcast the first-ever live debate from inside the Senate chamber. This movement encountered considerable pushback. Wertheimer, who had been told in the late 1960s by an NBC executive that “women are not credible on the air,” according to Phillips, was later criticized for her “frosty” and “colorless” voice by Mitchell. By the time Wertheimer became a co-host of ATC in 1989, the notion of a woman in that role no longer seemed revolutionary. But some of their male colleagues referred to Roberts, Totenberg and Wertheimer as the “Fallopian Troika,” a testament to the enduring hostility to women’s presence in the public arena.

As the recent spasm of criticism directed at “vocal fry” in public radio voices indicates, the hostility to women speaking in public is not yet a thing of the past.

Meanwhile, on the AM dial and further right on the FM dial, conservative talk radio and drive-time and “morning zoo”–type shows blossomed in the 1970s and 1980s. These two formats were noted for their domination by male hosts, the vehemence of their anti-feminist backlash politics and their puerile, at times misogynistic humor. Hostility to feminism was perhaps the most coherent feature of the radio talk format in this period, as Douglas has demonstrated. AM talk radio in particular was celebrated by the right as a counterweight to the perceived liberal tilt of the rest of the media and as a reaction to precisely those historical movements that promised to make many voices and accents audible on the public airwaves.

In recent years, as public radio hosts, anchors and correspondents have become increasingly diverse in their races, national origins, ethnicities and acknowledged sexual orientations, the battle over public broadcasting’s funding can be seen as a proxy war over a larger struggle over the dominant values of our nation. Tony Snow, the late talk radio host and George W. Bush’s press secretary, has been quoted as saying that in order to get a job at NPR you had to have a name “that looks like it was made up by Rudyard Kipling.” At the same time, the constraints imposed on these voices by narrow race- and class-bound notions of what a public radio voice ought to sound like represent some urgently unfinished business, as Chenjerai Kumanyika has pointed out. And as the recent spasm of criticism directed at “vocal fry” in public radio voices indicates, the hostility to women speaking in public is not yet a thing of the past. Failure to attend to these challenges may limit the scope of the public’s mobilization in support of public radio’s continued existence.

Even so, public radio’s many accents and dialects represent hard-fought battles that seem to be under attack with a bracingly renewed sense of vigor. This presents a complicated set of challenges to the people responsible for public radio’s sound and content, the first of which may be questioning the limits of the metaphorical relationship between literal voices and the social-justice histories that they seem to embody. Are public radio’s diverse voices components of a robust public sphere or merely sound effects for one? Public radio’s founders and its most ardent critics have at different moments accepted an easy equivalence between the demographic diversity of its voices and the progressive impulses of its journalism. And with the revanchist white nationalism and toxic masculinity of the moment, we are reminded of the historical struggles required for diverse voices to reach the airwaves and the precarious nature of those victories. But active constructive participation going forward may require not just new voices but new words, as well.

Jason Loviglio is associate professor and founding chair of Media and Communication Studies at the University of Maryland, Baltimore County. He is author of Radio’s Intimate Public: Network Broadcasting and Mass-Mediated Democracy and co-editor, with Michele Hilmes, of Radio Reader: Essays in the Cultural History of Radio and Radio’s New Wave: Global Sound in the Digital Era. His work on the “public radio structure of feeling” has appeared in journal articles and is the focus of a book project in progress.

This commentary appears as part of Rewind: The Roots of Public Media, Current’s series of historical essays about public media. The series is created in partnership with the RPTF, an initiative of the Library of Congress. Josh Shepperd, assistant professor of media studies at Catholic University in Washington, D.C., and national research director of the Radio Preservation Task Force, is Faculty Curator of the Rewind series. Email: shepperd@cua.edu

Correction: An earlier version of this essay mistakenly said that Susan Stamberg was the first host of All Things Considered. She became a co-host of the show after it had two solo hosts.

4 thoughts on “Threatening and threatened, voices of women have defined public radio”