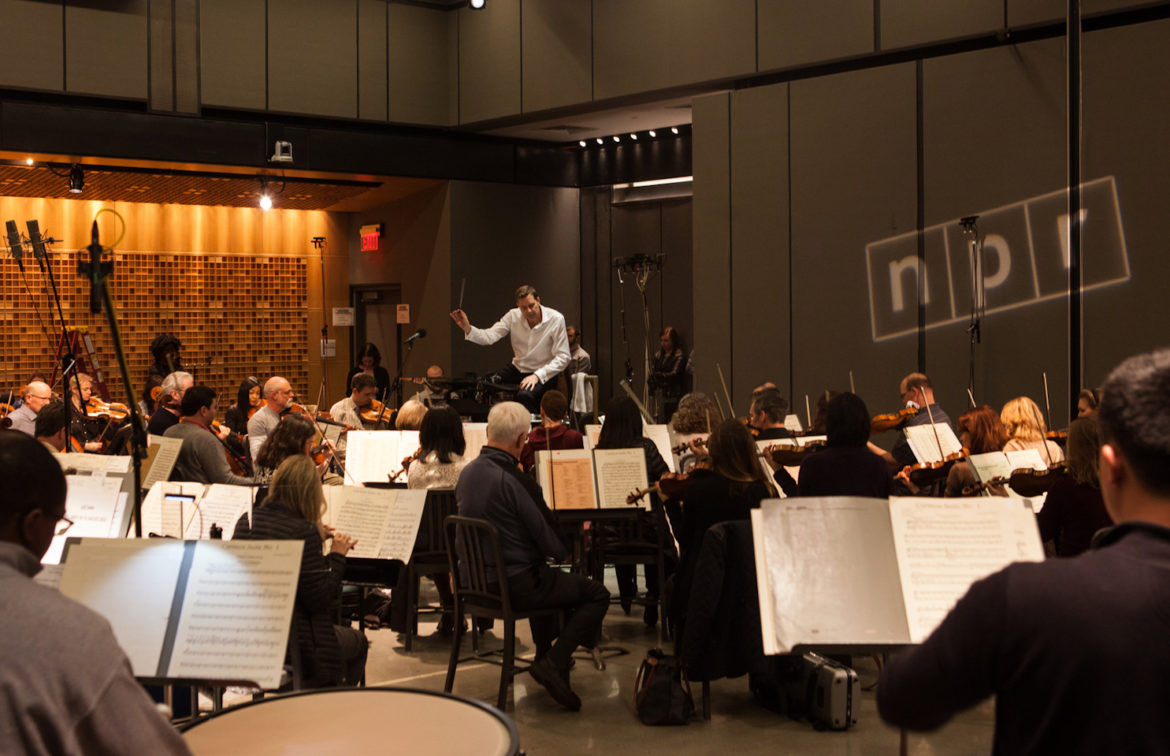 The National Symphony Orchestra performs at NPR during Monday’s broadcast of “All Things Considered.”

Last summer, after surviving a Taliban ambush that killed two of her NPR colleagues, Producer Monika Evstatieva returned home from her near-miss in Afghanistan less afraid of big challenges. “Nothing really scares me anymore,” she said. And when she was contemplating an ambitious project never before attempted at NPR, she told herself, “I am going to do this.”

This week, she did.

Back in Washington and after months of negotiations, Evstatieva pulled off quite a feat: squeezing 75 members of the National Symphony Orchestra into NPR’s largest studio to become, in effect, the house band for a day for the afternoon newsmagazine All Things Considered.

For the first time in its 45-year history, All Things Considered had a symphony orchestra provide live music between news segments, a bit of a high-wire act for a national radio program heard by more than 13 million people weekly. The show had previously experimented with two far smaller groups offering up live music throughout All Things Considered — Los Straitjackets, an instrumental guitar band, and Thievery Corporation, a mixed-genre electronic band.

When Evstatieva first held up the “30 seconds” sign on her side of the control-room glass and cued Principal Pops Conductor Steven Reineke after the opening newscast, the orchestra burst into a lush, original composition of the ATC theme as a digital clock and sweep second hand on the control-room clock precisely counted down each segment second by second.

It was a throwback to the days of live weekly national radio concert broadcasts by Arturo Toscanini and the NBC Orchestra from the late 1930s to the 1950s. More recently, folks of a certain age will remember the timpani drums of Beethoven’s Ninth Symphony, second movement, dramatically opening the Huntley-Brinkley Report, NBC’s nightly news broadcast from the mid-1950s to 1970.

For Reineke, the weaving of classical music and news makes sense. “It’s a strange cliche, but we’re playing second fiddle,” he said. “By adding the music between the news segments, we’re enhancing a certain feeling or mood.”

Following a segment on the grisly Stephen Sondheim musical Sweeney Todd, for instance, the NSO played Stravinsky’s “Infernal Dance” from “The Firebird,” and Evstatieva could be heard telling Justin Ellis, the National Symphony Orchestra artistic administrator, “It sounds like chopping people’s heads off.” Mission accomplished.

Given the politics of our time, he quipped during his post-rehearsal lunch break, “I know some of the stories today will be about President Trump. I was hoping we could pair Shostakovich’s allegro from his tenth symphony. This particular movement is very Russian. On the other end, I could have played Smetana’s ‘Dance of the Comedians.’ I could have injected some musical political humor, but I didn’t.”

Monday’s broadcast also made history when the second hour was live-streamed on Facebook, with multiple cameras allowing listeners who normally can only hear the program to watch the National Symphony in action, newscaster Jack Speer and hosts Ari Shapiro and Audie Cornish introduce interviews and produced reports.

For this former director of ATC circa 1979–80, it was back to the future. In my day, we grabbed what were the equivalent of eight-track tapes to select the music — “buttons” is the term of art — between news stories. Today, of course, all the content of the broadcast — music and news — is digitized.

In the old control room on M Street in Washington, there were no computers, people smoked and editing was done with razor blades and splicing tape. Perhaps there’s no better image that captures the entire radio era from the 1930s through today than what I witnessed Monday: a video switcher for the five-camera live streaming of the special edition of ATC on the back deck of the control room and just a few feet away, through the glass, the 75 members of the National Symphony Orchestra playing Beethoven’s Fifth in C Minor, filling the airwaves coast to coast.

Conductor Reineke is a big proponent of introducing classical music to new audiences, hence his excitement about the NSO’s work with the hip-hop musicians such as Kendrick Lamar and Common. “I’m pretty worried, to be quite honest, about classical music becoming increasingly niche,” Reineke says. “It’s pretty cool we made this happen at NPR. We’re not afraid to try new experiments to reach a broader audience. This orchestra has a responsibility as an artistic ambassador to the country and world.”

Among the flood of positive comments on Facebook and Twitter about the 75-member orchestra woven into ATC was this tongue-in-cheek dare: “Let’s see their Tiny Desk Concert,” a reference to the series of intimate music concerts NPR videotapes at the desk of the host of All Songs Considered. I wouldn’t look for that anytime soon.

As Minnesota Public Radio ATC host Tom Crann marveled, an orchestra was “playing music in real time as the news unfolded. We’re in our membership drive, so it underlines the fact that music and the arts are a heritage of public radio and in the DNA of MPR.”

After the broadcast’s flawless integration of the live orchestra, Monika Evstatieva returned to the ATC production unit to a cheering staff and a toast to her decision to take on a formidable challenge that no one had ever tried, let alone pulled off.

Richard Harris, a former producer, director and newscaster for All Things Considered, lives in Bethesda, Md.