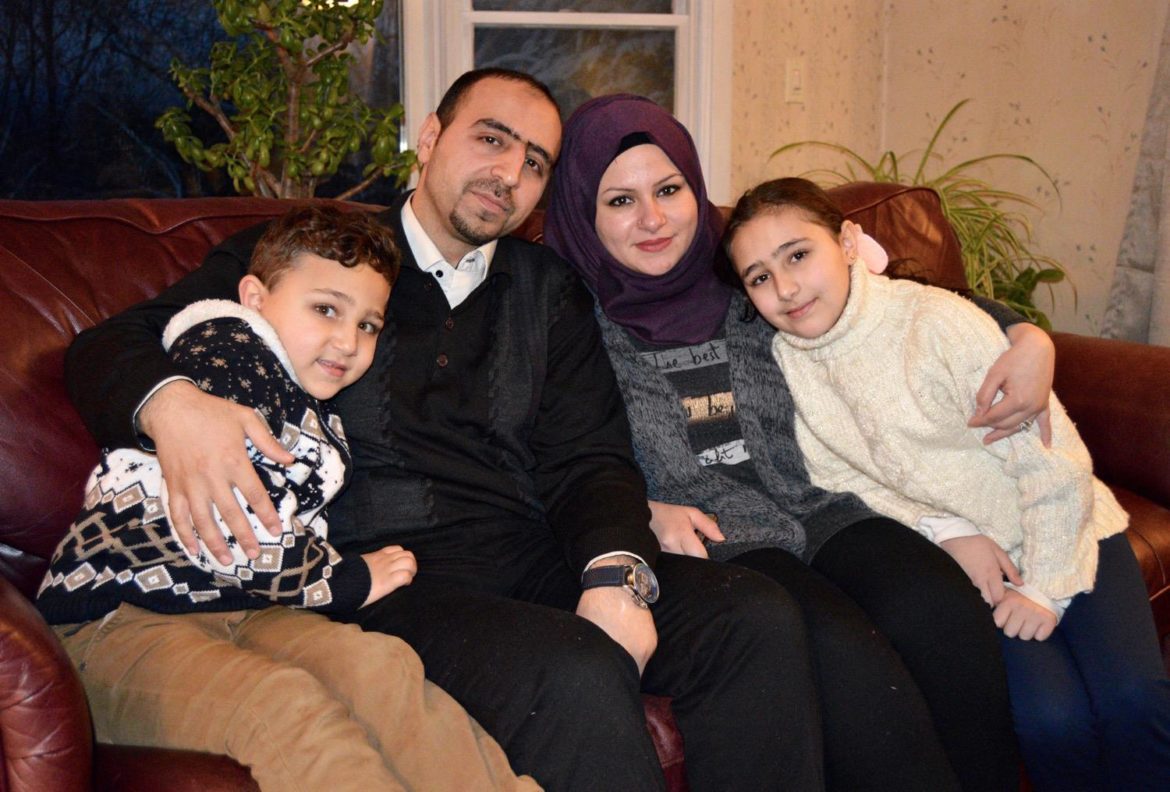 Hussam and Haza, who asked to be identified only by their first names, arrived in Rutland, Vt., with their children last month. VPR’s Nina Keck reported on their arrival before traveling to Jordan on a special assignment. (Photo: Nina Keck/VPR)

As journalists across the country scrambled last month to report on reactions to the White House’s controversial order barring entry by immigrants from seven countries, Vermont Public Radio’s Nina Keck was on a special assignment in Jordan reporting on refugees waiting to come to America.

Keck traveled abroad for a VPR reporting project looking into the lives of refugees as they prepare to resettle in the United States. VPR launched the project Jan. 18 and invited listeners to submit questions through the Hearken audience engagement platform.

Keck’s original assignment was to focus on refugees waiting for clearance to relocate to the U.S., and ideally those headed to Vermont, according to Patti Daniels, EP of Vermont Edition, a twice-daily VPR show that mixes news and conversation. But this plan became “not feasible at all” after President Trump’s Jan. 27 executive order temporarily suspended entry by immigrants, refugees and other visitors from Iraq, Syria, Sudan, Iran, Somalia, Libya and Yemen.

In planning for Keck’s trip, Daniels developed contacts in the State Department’s Population, Refugees and Migration bureau, which oversees the refugee vetting and admission process in Washington, D.C., and Amman. A regional refugee coordinator in Jordan was to help Keck contact refugees going through the vetting process and provide access for her to take an inside look at how vetting works from the government’s standpoint.

Once the executive order had been put in place, all of VPR’s State Department contacts “shut down,” according to Daniels. Officials were no longer available to give them details about the status of U.S.-bound refugees.

The setback forced Keck to reorient her reporting toward covering the public and geopolitical responses to the Syrian refugee crisis, as in a Feb. 1 story describing a shortage of aid going to Jordanian refugee camps, and another reporting on New England–based volunteers working with refugee programs in the country.

Questions submitted via Hearken helped VPR change Keck’s reporting angle while staying in line with the listeners’ interests. The crowdsourced questions ranged from learning about the refugees’ culture and customs to geopolitical context, Daniels said.

Refugee resettlement is a hot topic for VPR listeners, especially those in the city of Rutland. Last year the city adopted a plan to become a refugee resettlement community, and it had expected to receive 100 Iraqi and Syrian families over the course of this year. In December Keck reported on how the resettlement plan divided the community as part of a special series from the New England News Collaborative, “Facing Change.”

Though the executive order has been blocked by federal courts, the status of Rutland’s settlement program remains “fluid,” Daniels said. The appeals court ruling issued Thursday that refused to uphold the ban opened the door for Rutland to resume its program, but that could change. The number of Syrian refugees coming to the state and the date of their arrival are unknown.

VPR initiated the project in response to the controversy in Rutland, Daniels said. Local journalists began to ask “Who are the people we’re talking about when we’re talking about refugees?” and decided to try to talk to the refugees themselves, she said. An editor at the Rutland Herald came up with the idea to pursue the coverage in collaboration with VPR, but the paper eventually backed out.

Reporting on the refugee crisis presents the same challenges as many other international stories. People involved are distant, and their numbers are overwhelming, Daniels said.

She believes it’s important to give VPR’s audience accurate information about what’s going on and explain the “wildly different circumstances” between migration in Europe and refugee resettlement in the U.S. Using Hearken to invite listeners to submit their own questions has helped bring the international reporting closer to home.

“The goal is to humanize and personalize the story for listeners, “[to show] these are who we’re talking about when we say ‘a million Syrian refugees,’” she said.