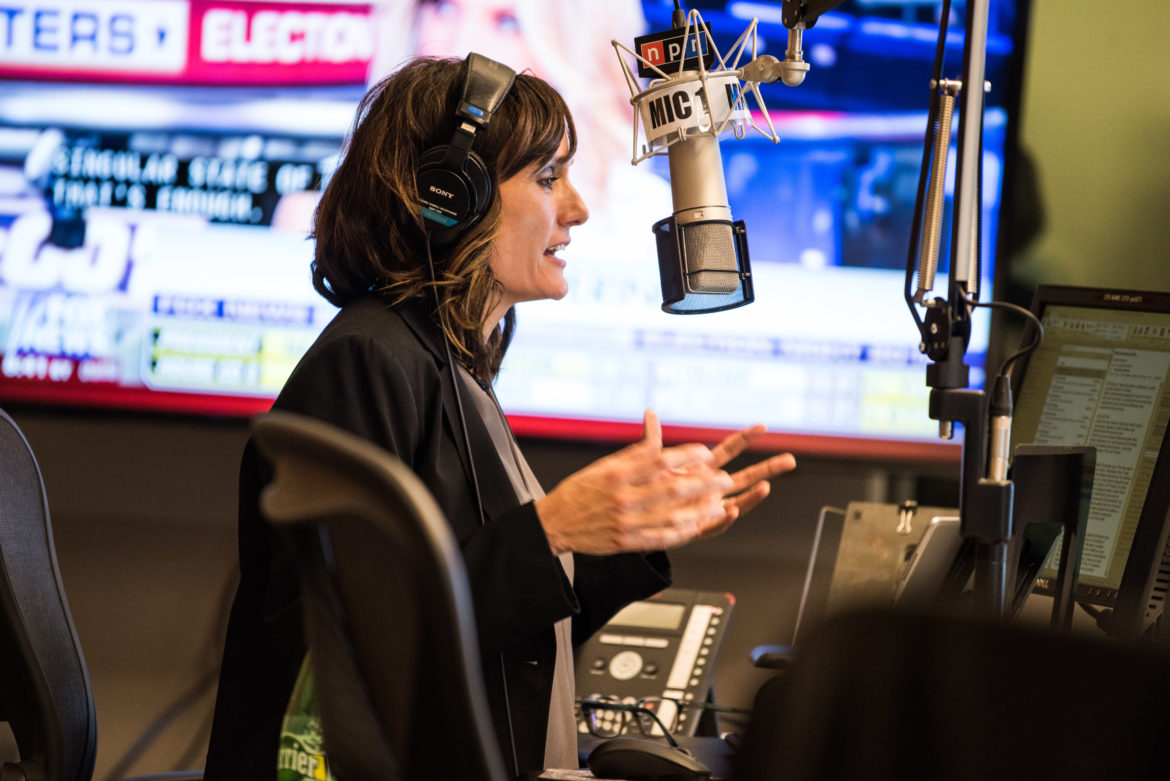 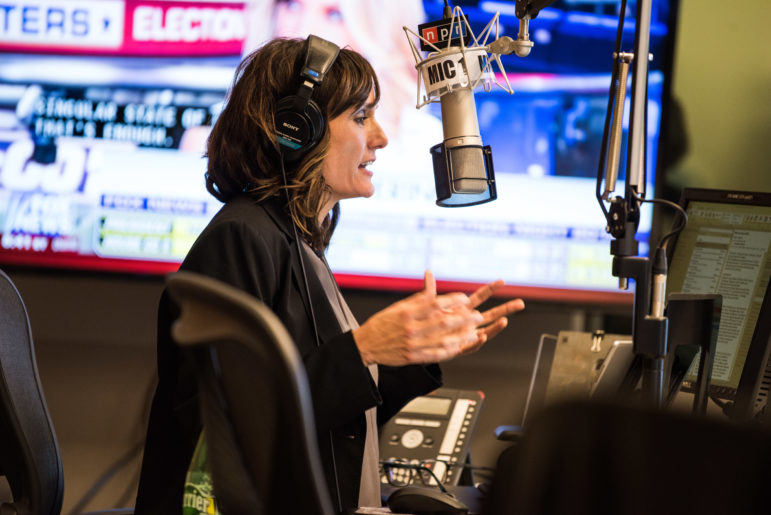 Martin behind the mic during the election. She fills a co-host chair at Morning Edition starting Monday. (Photo: NPR/Stephen Voss)

As Rachel Martin begins settling in Monday as a new co-host on Morning Edition, the NPR veteran says she wants to see the show step up its live elements and develop deeper connections with communities between the coasts.

“It’s an integral part of our mission to get out into the country, to parts of the country that we don’t get to usually, and understand what’s going on for people in those places and tell the stories of the people who live there,” Martin told Current last week.

Martin steps in for Renee Montagne, who announced in July that she would move into a special correspondent role after 12 years as a host of the show. Montagne’s final broadcast was Nov. 11.

NPR fills the vacant host chair at a time when Morning Edition is reaching a near-record audience. And according to NPR, Nielsen estimates for November 2016 showed a 38 percent increase in average–quarter-hour listening among 25- to 54-year olds over the previous year.

Martin, 42, is an Idaho native who got her start in public radio as an intern at KQED in San Francisco. She went on to report for NPR, covering religion and national security and also working as a Berlin-based foreign correspondent. She was also newscaster and co-host for The Bryant Park Project, an NPR morning show that aimed to attract a younger audience. She’s been in the host chair at Weekend Edition Sunday since 2012.

The three Morning Edition hosts will be on a rotation where every four to six weeks one of the hosts will be reporting away from the NPR studios. It’s a model All Things Considered has experimented with their four hosts and has been “really successful,” Martin said.

In an interview with Current, Martin discussed her aspirations for the show, how growing up in “flyover country” has influenced her work, and her anxiety about the alarm clock.

Current: What do you hope to accomplish in your new role?

Rachel Martin: I think now, especially in the wake of this election, public media has a mandate. It’s an integral part of our mission to get out into the country, to parts of the country that we don’t get to usually, and understand what’s going on for people in those places and tell the stories of the people who live there. And so I’m really looking forward to being able to do that.

I’m from Idaho originally. And that is a corner of the country, the mountain West in particular, often called “flyover country,” lumped into the Midwest even though it has its own particular culture. So I’m specifically attuned to paying attention to places that we haven’t paid attention to.

What do you think differentiates you from your the other Morning Edition co-hosts?

I don’t know if I’m going to regret saying this, but I think I’m a little bit of a hybrid between the two of them. I’m a bit of a policy wonk, I have a master’s in foreign policy, and [Steve] Inskeep is deep into that stuff, so he and I share that. At the same time, I know David [Greene] in particular likes to do deep-dive, in-depth personal conversations, like portraits of individuals, and kind of really get into a person’s life. And I really love doing that, and I got to do that a lot on Weekend Edition. I love pop culture, and that’s not necessarily Inskeep’s sweet spot. David is way more attuned to that kind of stuff. So we have a little highbrow, lowbrow thing going on.

“Morning Edition for the past year has been more live than it has been in its history, and I think we’re going to continue to push that.”

What we’re hoping is that the three of us, the chemistry that we have among the three of us, that that’s going to come out and we’re going to hear that more on the air. And we’re looking forward to that. We’re going to try to create space in the program that will be different. Our audience will hear us talk to each other more. And we’re going to use social media more, and we want our audience to be part of the show more. It’s going to be far more unscripted than it’s been before.

Has hosting Morning Edition always been a goal of yours?

I always wanted this job. It’ll suffice as my dream job. It’s one thing to have a dream job and aspire to that goal — I didn’t ever think it would actually transpire. I feel really, really lucky.

I’ve had so many amazing editors, starting at KQED in San Francisco. I started as an intern in public radio at the member station there and worked at WNYC when I was in grad school, and then when I was a freelancer at NPR I had so many amazing editors who just took the time to teach me and really invested in me and opened other doors and helped me take risks. So I’m just so thankful to all those people for making this happen. This is a dream job for me, and I think it’s a great time to be able to do this kind of work.

What did you learn from working on the Bryant Park Project?

Definitely the idea of being more nimble with the clock. Morning Edition for the past year has been more live than it has been in its history, and I think we’re going to continue to push that, just because I think it draws people in. [We’re] in an age where news needs to be immediate to get people to tune in, so I think live is just better.

What lessons did you learn from hosting Weekend Edition that you might apply to hosting Morning Edition?

We launched a series that we called “For the Record,” which was our attempt to kind of experiment with long-form narrative storytelling with news stories, and then using music and non-narrated techniques to tell complicated news stories. So I think you might see some of that on Morning Edition too.

So kind of two extremes. What I find the most exhilarating are the extremes of either live unscripted or heavily produced, beautifully produced storytelling with music and first-person narration. And so I think we’d like to take people to those extremes.

Are you planning to pursue specific reporting interests?

Morning Edition is planning on embedding in three to four communities over the next couple of years. That would mean Steve and David and I picking a handful of communities that we would return to every few months, and sometimes that will mean physically being there for like a week or so at a time, just developing relationships with people who live in these places — we can call them up and see how they’re doing. But it’s an attempt to kind of get deep with people, as a mechanism for really marking change in America.

I’m not so much interested in the piecemeal, like dropping in on one place one time and thinking you know what’s going on there. You just don’t. It’s just a snapshot. And I think what all of us are craving is the experience of going deep into a place and developing relationships with people there so that then the conversations we have over time can get more and more honest, because that’s the way you get people to open up about their fears. And we saw in this election a lot of people are afraid. Economic instability, there are real fears about terrorism, scarcity of resources, and that’s connected to some people’s fears about immigration. We need to get into these communities and understand those anxieties and be able to mark how people’s lives change and how those fears are assuaged through the Trump administration or exacerbated. We can’t do that from afar.

Do you know which communities you plan to embed in?

I hesitate to tell you now, because it might change. We know we want a community on the border. We’re going to find a place on the U.S.–Mexico border to spend time in. Someplace in coal country. A city. We definitely want to be able to mark change in an urban area that struggles. Some place probably in the mountain West.

“I’m interested in getting into communities that are changing demographically and understanding how people relate to the quote-unquote other.”

I am personally interested in how Americans are thinking about their country as a pluralistic democracy. For 200 years, we’ve had a tradition of bringing in the tired and poor and being a country of immigrants. That has worked to a certain degree. But I think we saw in this election a lot of people are feeling like the country and the culture they grew up with is becoming something different. And I’m interested in getting into communities that are changing demographically and understanding how people relate to the quote-unquote other, the immigrant family who just moved into a rural community in Nebraska. The Muslim family that’s moved into an all-white community of Mormons, and how these people treat each other as neighbors, how they treat each other in the community, how they reconcile their different cultural norms. That’s the America I want to explore. That is what has made America great, is our ability to celebrate our own diversity, but that has kind of been put to the test recently. So I want to get into that tension.

Do you think being from Idaho influences how you do your job? If so, how?

Absolutely. I think we’re all influenced by where we came from and the cultures that we came from.  My family is five generations from Idaho. I come from a family of farmers. I come from a corner of America that’s largely homogenous. And I am always taking the temperature back home.  Calling up family who still lives there and asking them how they view certain events, political trends, things happening. And I am always kind of not too far away from those experiences and trying to understand how people who live, in some ways, really apart from big urban cultures and common culture and definitely the coasts. What is driving their decision-making? How do they feel misunderstood in the media? In mainstream culture? So I’m always thinking about that.

Religion in particular — I come from a very religious place, and I covered religion for a year, so that’s also something I’m really interested in — questions of faith and separation of church and state and how people of faith feel represented and unrepresented in our culture.

As a Morning Edition host, you’ll be working unusual hours. Are you doing anything to prepare?

Well, I wish I could stock up on sleep. But I can’t. So we are just trying to get my own little family prepped for this. My husband is going to be in charge of all the morning routine, packing the lunches, getting the kids dressed for school. And so we just got to get into and we’ll take it as it comes.

For sure, the thing I’m not looking forward to is waking up at three in the morning. For sure. I have major anxiety over that idea.

2 thoughts on “With new host Rachel Martin, ‘Morning Edition’ plans to focus on places ‘we haven’t paid attention to’”