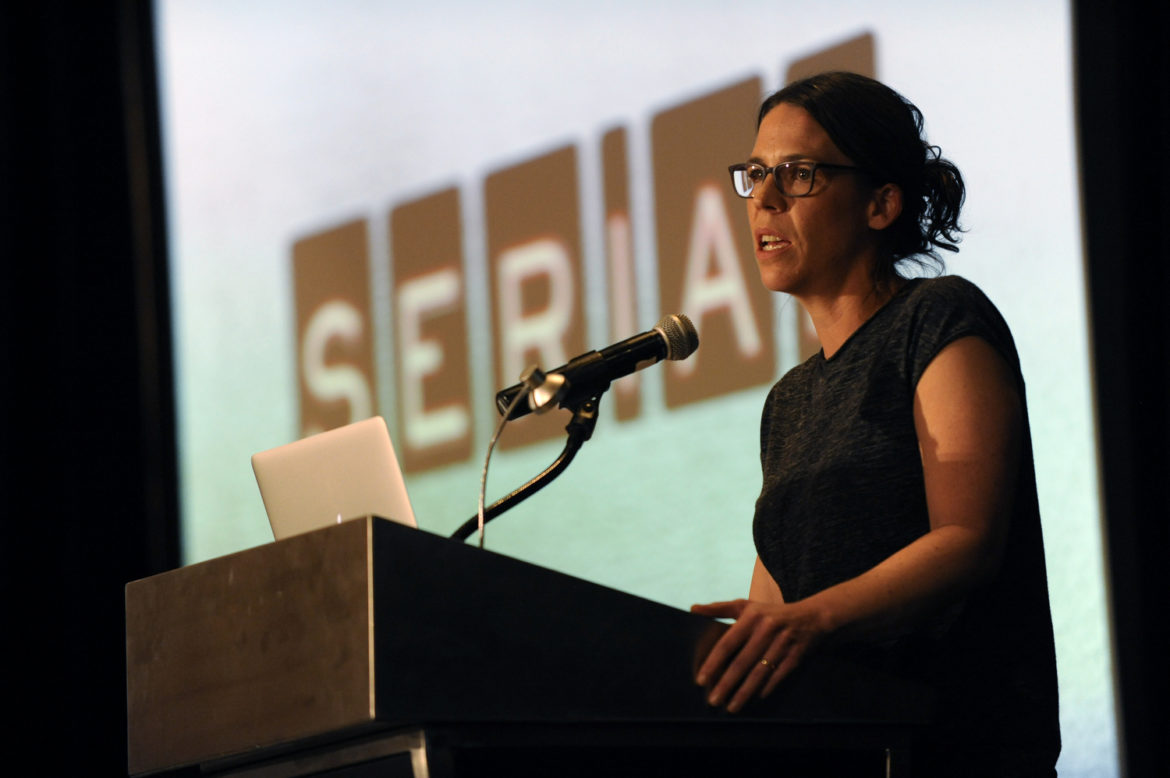 CHICAGO — Serial co-creator Julie Snyder was just as shocked by the podcast’s breakout success as the rest of the world.

Asked about why the first season of the serialized This American Life spinoff ensnared the world in its murder mystery, she said, “I have zero ability to answer that question. … Why would I know what makes something successful?”

But she does have insights into how the program’s structure came together behind the scenes, and why its second season failed to ignite both producers and audiences like the first. Snyder shared her thoughts on the show, serialized audio storytelling and the program’s next steps as part of a session at the Third Coast International Audio Festival conference Saturday and Sunday.

Serial began as a spinoff, but has grown so big that now it’s launching spinoffs of its own. A new, still-untitled project is scheduled to launch in four months: “Tell Squarespace it’ll be in March,” Snyder joked, acknowledging the show’s habits of missing its deadlines.

Snyder read the series logline she’d sent to the program’s sponsor: “A new seven-part podcast about a man who despises the Alabama town he’s lived in his entire life and tries to do something about it.” The series involves a murder investigation that leads to “strange relationships and a hunt for hidden treasure.”

An official third season of Serial will follow the spinoff next summer. In October, co-creator and host Sarah Koenig was spotted with producer Dana Chivvis recording testimony at a trial for a Cleveland-area triple homicide case.

The first season’s storyline, concerning the now-infamous murder case involving Adnan Syed, “fell into place with very little discussion,” Snyder said. It was initiated because of Koenig’s connections to Syed’s attorney. The narrative structure itself took some time to develop, though: Koenig drafted a 15-page outline of potential story bits to hit, but the reporting started to slow down seven months into the project.

To keep themselves on track, Snyder said, the staff forced themselves to plan the series episode-by-episode. A decision to launch the first episode on TAL, which structures each program around a theme, helped Serial’s team nail down what the series’ themes would be for subsequent installments: After the first episode’s theme of “alibi,” they adopted “shadow themes” that weren’t always as transparent in the storytelling.

Helped by the renewed attention of Serial, Syed is now set to receive a new trial for the 1999 murder case of Hae Min Lee that put him in prison with a life sentence.

Serial’s unique narration, in which Koenig candidly describes her own knowledge gaps in the story, was crucial to Snyder. “I also thought it was important for Sarah to tell us what she didn’t think or what she didn’t know,” she said. “It puts you in a vulnerable position to admit uncertainty.”

“It’s exciting to keep on expanding our thoughts of what is possible” in the serialized approach, Snyder said.

But when the team began working on the second season, uncertainty ruled a bit too much. The more ambitious and complex reporting project saw Koenig and Snyder tackling the story of U.S. Army Sgt. Bowe Bergdahl, who was captured by the Taliban in Afghanistan in 2009 until he was released five years later as part of a prisoner swap. Bergdahl now faces charges of desertion and misbehavior before the enemy in a court-martial trial scheduled for next May.

While Serial’s first season introduced Syed and his court case to the world, Bergdahl’s story had already been widely reported, making it difficult for Snyder and Koenig to know what structure to take in their approach. In addition, many of their sources in the military could only speak on background, and the reporting team could only pull audio of Bergdahl himself from a second source, his interviews with filmmaker Mark Boal.

“It was a tremendous amount of stuff to try to figure out how to cram into a structure,” Snyder said. “I couldn’t figure out where to begin.” And four episodes in, she still didn’t know where to take the story. The team attempted to use Bergdahl as a way to “zoom” in and out of different focal points, from Bergdahl’s own personality to the history of the war in Afghanistan. But the zoom approach made the show more sprawling, and the task of focusing on certain narratives was more challenging.

Serial has helped usher in a trend of serialized storytelling in podcasts. In August, American Public Media released In the Dark, a nine-part series about a 27-year-old child abduction case that touched on unsolved crime statistics in sheriffs’ departments nationwide. The show, reported by Madeleine Baran, was praised throughout the conference, including during a session on how to make data interesting on the radio. Other audio programs that have tackled serialized structures include Panopoly’s Hollywood history podcast You Must Remember This and several new fiction shows.

“It’s exciting to keep on expanding our thoughts of what is possible” in the serialized approach, Snyder said. She noted that crime stories with natural “whodunit” hooks seem to lend themselves better to the format, giving listeners some mystery to hold onto while they journey through the episodes.

From Serial’s beginning, Snyder and Koenig shaped their storytelling around conventions of serialized TV shows; Snyder cited ESPN’s recent documentary O.J.: Made in America as a model.

To help with their new spinoff’s structure, they brought in Starlee Kine, a former TAL producer whose podcast Mystery Show was recently canceled by Gimlet after one season. “She really likes weird stuff, and she loves TV,” Snyder said.

Kine advised them to veto a planned “A” and “B” parallel storytelling model, one Koenig and Snyder were hoping to borrow from TV. She told them she thought it was “stupid,” Snyder recalled with a laugh.

And to avoid losing control of the project again, the team spent five weeks reworking the narrative structure before writing anything else.