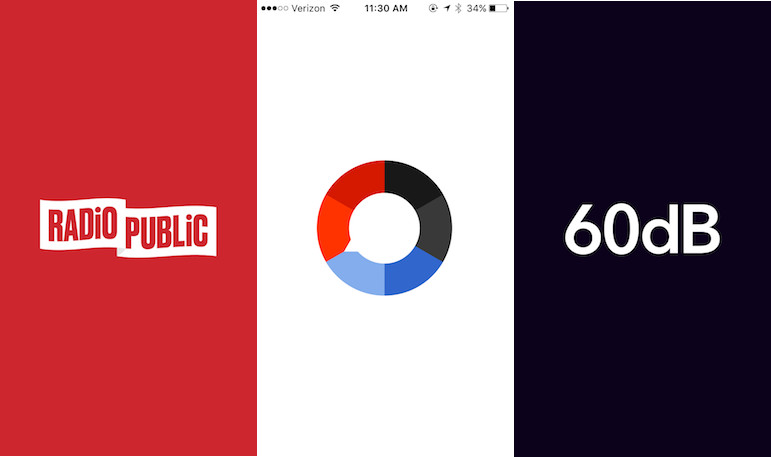 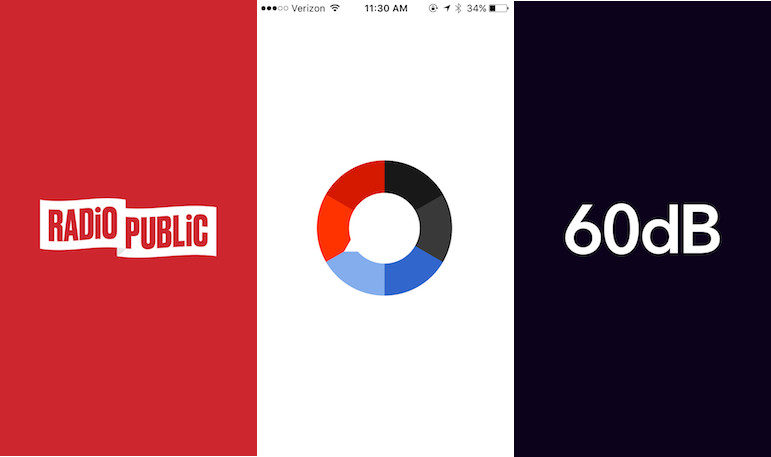 As I looked ahead to a long Thanksgiving weekend, I thought, what better time than now to test-drive the new and emerging apps that seek to tame the Wild West of podcasting?

I narrowed my choices down to 60dB, spearheaded by Planet Money alum Stephen Henn; RadioPublic, an offshoot of Public Radio Exchange, the same outfit that created the podcast network Radiotopia; and NPR One, public radio’s mixtape machine that combines NPR, local news content and other programs. It’s worth noting that on all three platforms, NPR content or content created by public radio member stations is king; the question is how to best deliver it for the digital age.

The apps featured here aren’t necessarily designed just for listening to podcasts. When it comes to spoken-word audio, these apps are shooting for a mix of discovery, personalization, ease of use, and curation on a digital platform.

So, after loading up on turkey, mashed potatoes, and cranberry sauce, I popped in my earbuds, and here’s what I found:

Big idea: The world is full of great podcasts, and not just those produced by NPR or PRX! The RadioPublic platform helps podcast producers find, build and engage audiences. 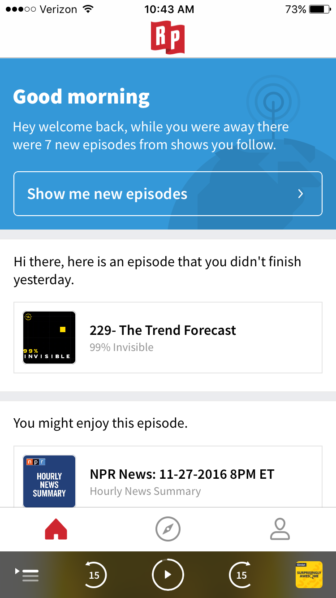 Best feature: This app takes the top prize for discovery, with everything from guest playlists to podcast producers featuring the best “intro” episodes. It also notifies you when new episodes of your favorite podcasts are available.

Worst feature: How can I tell the world about a great new podcast without social sharing options? The app serves up a slate of podcasts based on what you like, but for some reason, the “queue” feature was blank, and I couldn’t figure out how to see what was coming up next. It also has a basic RSS import feature, but after I entered a feed, the app presented me with a enthusiastic check mark with no explanation.

Notables: You can connect with a “librarian,” who will take your podcast suggestions for the directory and make recommendations. My librarian suggested that I check out U Talkin’ U2 To Me, which posted its last episode over a year ago. I followed it and will likely give it a listen, but I was surprised not to be offered something more current.

Platforms: Available for both iOS and Android.

Big idea: A personalized service that curates high-quality audio in story-sized bites (aka “short form”) from a variety of sources. Oh, and if you want to listen to full podcasts, you can do that too. 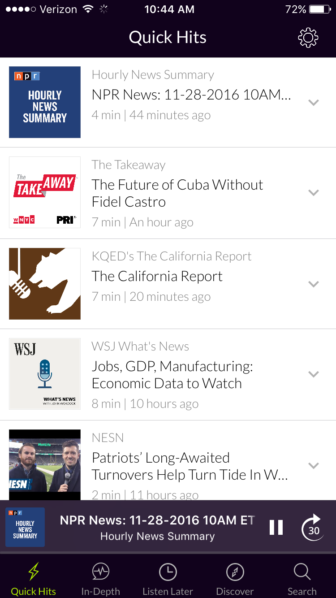 Best feature: The “Quick Hits” feature kept me coming back for more. Based on your preferred categories, the app serves up a playlist of two dozen stories sorted by the most recent.

Worst feature: The user interface isn’t as aesthetically pleasing as those of NPR One or RadioPublic. There were noticeable differences in sound levels between stories, but none that made me pull my headphones out. Users must register to access the service, whereas both NPR One and RadioPublic make it optional.

Notables: While the mix is primarily public radio content, it also weaves in stories from Forbes, CBS, the Wall Street Journal, Slate, Business Insider, ESPN, SB Nation and many more.

Platforms: Available for iOS. An Android app is in development.

Big idea: To be “the Pandora for news.” Provides a digital platform where the best NPR and locally produced public radio content can mix and mingle. Its latest iteration helps you “explore” the world of NPR and local podcasts as well. 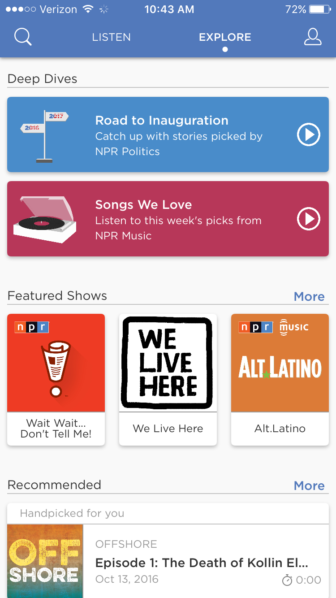 Best feature: The ability to skip, share, or save a story or episode for later.

Worst feature: The library is more limited compared to those of 60dB and RadioPublic, featuring mostly NPR and member-station–produced content.

Notables: The mix of national and local content of varying lengths (including podcasts) based on location is a great way to tap into the power of the public radio network. Unfortunately, that makes it dependent on local stations participating in the NPR One experiment. That being said, it’s the most mature platform of the bunch, available on any device.

Only one of the three apps passed what I call the “Rich Roll Test.” Judge me as you will, but I happen to love Rich Roll, the overweight middle-aged dad turned vegan ultra-athlete. He wrote a book, Finding Ultra, and launched a very popular interview-style podcast. Therefore, my very first test of each app was to see if I could find and follow my favorite podcast.

Only 60dB passed the test out of the gate — while also letting me import my podcast subscriptions from the built-in iPhone app! RadioPublic let me request that it be added to the directory. It was available within 24 hours but not yet “discoverable” through the search feature. The NPR One app just gave me a blank stare.

To be fair, both 60dB and RadioPublic are brand new, so a few bugs are to be expected. Both apps have promising development roadmaps and tease future features that will only improve the user experience.

However, the focus on apps may be a bigger problem. This summer, Recode announced that “the app boom is over.” Despite the millions of options available, users are loath to download and try new apps, preferring instead to rely on a handful that are usually social in nature: Snapchat, Facebook, Twitter and Instagram.

According to recent stats, the average American downloads zero new apps per month. This does not bode well for anyone looking to develop the next “killer app,” especially those who are looking to crack the digital code of spoken-word audio. RadioPublic is currently only available as an app. According to Henn, 60dB is also working on a browser-based version of its app. Meanwhile, NPR One has already launched a mobile browser–friendly version of its app, apparently in recognition of the emerging app-agnostic environment.

After spending quality time with each of these apps, I found myself wanting to make a mash-up of the best features from each to build the ultimate podcasting app. I am consoled by the fact that there are smart and capable people working diligently to make sure that it gets built … eventually.

Brendan Kinney is the Vice President of Development & Marketing at Vermont Public Radio. When he’s not shuttling his kids to dance and soccer practice, he runs a lot … and listens to podcasts.

Correction: This post has been updated to clarify that NPR One offers programs in addition to NPR and member station content.