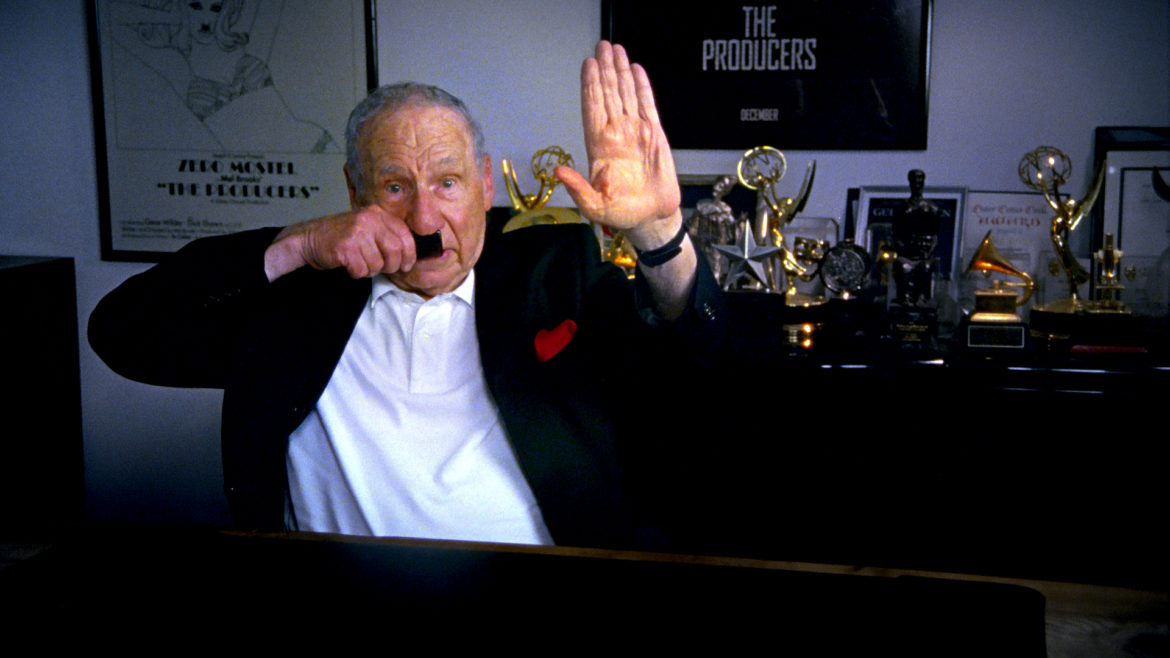 Mel Brooks, who made fun of Hitler and the Nazis in The Producers, is among the comedians interviewed for the film. (Photo: Ferne Pearlstein)

Mel Brooks, whose The Producers sent up Nazism, is among the comedians interviewed for the The Last Laugh. (Photo: Ferne Pearlstein)

A documentary airing on public TV’s Independent Lens next spring explores how comedy is used to discuss taboo subjects — especially the Holocaust.

Directed by Ferne Pearlstein, The Last Laugh includes interviews with about two dozen comedians, actors and screenwriters about whether it’s ever acceptable to joke about the Holocaust. Woven throughout is the story of an Auschwitz survivor and perspectives of others who endured the genocide.

The 85-minute film asks more questions than it answers, as comics including Mel Brooks and Sarah Silverman discuss who is entitled to joke about tragic events and where to draw the line. “… [W]e made a film about bad taste,” Pearlstein said, “but we made it in good taste.”

Pearlstein said she hopes that the film’s mix of humor and tragedy catches viewers off guard. “I wanted the feeling of, ‘I’m laughing, but what am I laughing at?’ — all these levels of comfort and discomfort while you’re watching,” she said.

Though the Holocaust remains a touchy subject, Pearlstein said she thinks the boundaries of humor have changed as she’s worked on the film. “… [I]t seems like people use satire more now with difficult topics or world events,” she said.

The Last Laugh also features footage of cabaret stages within concentration camps, and examines how those who were imprisoned used humor to get by. And contemporary survivors discuss how entertainment was used in the camps and their varied reactions to contemporary humor as it relates to the Holocaust.

As Pearlstein recalled, one survivor whose story is highlighted throughout the film told her, “Laughter is an instinct. Sometimes you cry, sometimes you laugh. It doesn’t matter where you are — it might happen.”

“That was a revelation for me,” Pearlstein said.

Pearlstein, who is Jewish, has worked as a cinematographer and director for numerous films, including the previous Independent Lens documentary Sumo East and West. She was drawn to the topic of The Last Laugh in part because of her “dark sense of humor,” she said. Brooks’ The Producers, which makes light of Hitler and Nazis, is one of her favorite movies, and she’s also a fan of Curb Your Enthusiasm.

“So I was very drawn to it just from the level of a comedy nerd,” Pearlstein said.

The idea arose in 1993, when a friend of Pearlstein’s wrote a paper about the subject for a college class and encouraged Pearlstein to make a movie about it. “I knew this was a project I was going to do, but I wasn’t ready yet,” Pearlstein said.

Pearlstein and her husband, screenwriter Robert Edwards, decided to write a proposal for the film in 1998. The same year, the movie Life is Beautiful was released. Directed and starring Roberto Benigni, it tells the story of an Italian Jewish man who uses humor as he attempts to shield his son from the terror of concentration camps.

“I wanted the feeling of, ‘I’m laughing, but what am I laughing at?’ — all these levels of comfort and discomfort while you’re watching.”

The award-winning film was critically acclaimed and a box-office success. With so much momentum and attention to its subject, Pearlstein and Edwards purposefully stepped back from their production out of concern that their interview subjects would want to talk about humor and the Holocaust in context of the movie, she said.

Pearlstein started working in 2006 to get the film off the ground again and realized it would be difficult to get funding. She also found that comedians were reluctant to discuss the subject. “They loved the idea,” she said. “People were starting to be more open to it. But nobody wanted to be the first one.”

Five years later, one of Pearlstein’s producers agreed to support the project and eventually provided almost all the funding. The New York State Council of the Arts also backed the film with a modest grant. Production began moving more quickly, and actor and director Rob Reiner agreed to be the first interviewee. Reiner’s participation helped persuade other comedians, Pearlstein said.

“Because of the credibility of Rob Reiner and how much love and respect he has, other comedians started signing on,” she said. “That’s how it happened.”

The Last Laugh premiered at Tribeca Film Festival and has screened at numerous others this year. Audience reaction has been “amazing,” Pearlstein said. Even a survivor who says in the film that she disapproves of Holocaust humor enjoyed the premiere.

“I just didn’t know what to expect [her reaction to be],” Pearlstein said. “She had such an incredibly warm response to the film and asked for tickets to the next show.”

Update: This post has been revised to reflect that a producer of The Last Laugh eventually provided almost all of the film’s funding, not an anonymous donor.