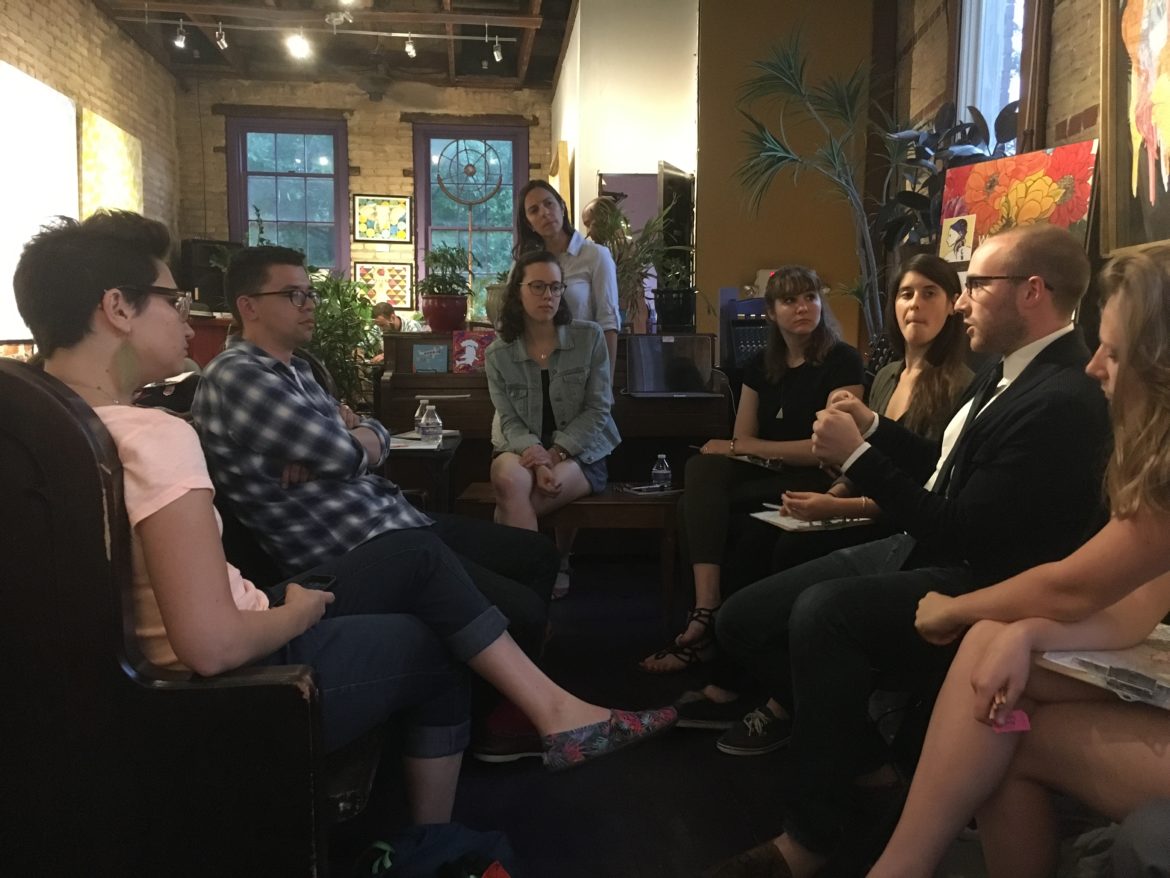 How do you define masculinity? Are cultural norms fixed, or can they be changed?

It’s not your typical after-work conversation. Or maybe it is. Upstairs at BloomBars, an 8-year-old community space in Washington, D.C., with purple-painted hardwood floors and art on exposed brick walls, about two dozen people, mostly millennials, have gathered around the radio to hear a story.

Well, not a radio, really, but a podcast streaming from a MacBook. BloomBars isn’t a bar, either.

With a cozy space and rich audio storytelling about a social experiment to shift the macho culture among male workers on an oil rig, this NPR listening party put a 21st-century twist on the golden age of radio.

“It’s like book club for podcasts,” said John Gordy, who at 48 thought he might be the oldest to attend.

The weekday-evening gathering was one of 200 listening parties across 32 states and three countries centered around the premiere of the second season of NPR’s Invisibilia. The event was part of Generation Listen, the NPR initiative that aims to engage and build community among 18- to 34- year-olds. Nineteen stations hosted the parties, which connect people around NPR content. The rest were hosted by “influencers” and fans in their homes or at public spaces. Participants live-tweeted using the hashtag #NPRListeningParty.

Millennials want to be heard

When Generation Listen launched three years ago at South by Southwest in Austin, Texas, cultivating younger donors was in sharper focus. But the approach quickly shifted to growing audience for the purpose of growing community. “When you start cultivating NPR as more of a habit for this younger demographic, the donorship will come,” Deabler said. After moving from her job as NPR’s public relations director to become Generation Listen’s staff of one at the beginning, Deabler also wasn’t set up for fundraising.

Generation Listen was initially producing original events, like at SXSW in 2014. “Not to say that this is off the table, but we realized we could be smarter and do more events with less money, lower production,” that are “highly and deeply engaging,” Deabler said.

As an audience engagement initiative, Generation Listen is trying to build community by having these younger people bring their friends to the table, Deabler said.

Last summer, Generation Listen road-tripped throughout the South creating the listening party format it debuted with Invisibilia. After the tour passed through WUWF in Pensacola, Fla., the station’s digital content producer Lindsay Myers received feedback that listeners  enjoy socials focused around public radio because attendees share something in common.

“They felt like public radio was a really good vetting process for potential friends,” said Myers, whose station held its Invisibilia listening party in a local coffee shop. “If you knew somebody else listens to public radio, that was immediately a litmus test; I have something in common with them when I would otherwise pass.”

Thanks to everyone who came out for our #NPRListeningParty tonight! Great discussion of vulnerability & change! pic.twitter.com/t2HRYtb2Qo

When cultivating community among millennials, it’s important to be authentic, make them feel like they’re part of the NPR family and show up in the physical and digital spaces that they frequent. Millennials want to get involved and contribute ideas. They want to be heard and responded to. Once heard, supporters become deeply loyal, Deabler said.

“It’s all connected,” Deabler said. “When you grow and engage a community, especially this 18 to 34 group that we’re engaging, then everything else will fall into place.”

The NPR Generation Listen team went on tour with Morning Edition’s “The View from Here” series, which featured live broadcasts in coffee shops, diners, libraries and other communal spaces in four cities across the U.S. during the primary election season. On the West Coast, those broadcasts began at 3 a.m. local time. “There’s a really strong contingent of NPR fans who do want to get up and meet David Green and Steve Inskeep at that time,” Deabler said.

NPR is also working with member stations, like Aspen Public Radio, to host events and launch their own Generation Listen hubs. A successful Generation Listen program at KCUR in Kansas City has grown from 22 to more than 750 people, said Ron Jones, director of community engagement.

KCUR started Generation Listen about two years ago after an informal focus group developed into a Leadership Council. Through the council, the station learned that its younger members were interested in more than social gatherings and storytelling events. They wanted to learn what makes Kansas City special. “The mission of the group became a way to connect people to their community and to each other with KCUR as the connector,” Jones said.

The station has opened its doors by inviting people to produce content. It also established the council as a task force of the station’s community advisory board, and both the council and board share information.

“I think this group can bring not only a new perspective, but a new sound to public radio that is more inclusive,”  Jones said. “I think it represents our opportunity to achieve greater diversity in our listenership.”

A book club for podcasts

Back at Bloombars, attendees at the Invisibilia listening party received one raffle ticket for signing into the event, a second for completing a coloring sheet and a third for making a donation. Winners received Generation Listen or BloomBars T-shirts.

“For the cost of some buttons and some stickers, they got a free venue and a bunch of people,” Schmoker said.

Although Cara Gabriel, an American University assistant professor of theatre, intended to break for discussion during the podcast and wrap up before the episode finished, attendees opted to plow through the hour-long piece before launching into a 30-minute discussion. They concluded by exploring whether vulnerability is gendered.

“Transparency,” Gabriel added. “No, someone said —”

“Consent! When you don’t have that level of consent, that’s the dark side.”

Despite the event running 30 minutes over schedule, most lingered to continue the conversation.