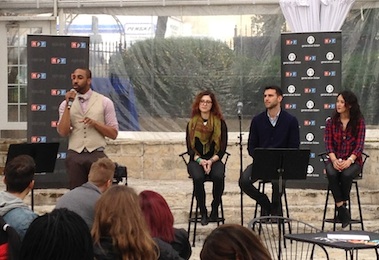 AUSTIN, Texas — NPR’s Generation Listen, an outreach initiative targeting millennials, returned to the South By Southwest Interactive festival this year with a storytelling event to celebrate its first anniversary.

The first year of the project, which aims to increase donations to stations from the under-30 crowd, has been primarily experimental, said Danielle Deabler, NPR director of audience engagement and the project’s architect.

After its launch at SXSW last year, the project expanded to station collaborations, including an event in New York with WNYC and a live performance of NPR’s Ask Me Another at NPR West in Culver City, Calif. It has also attracted more than 4,000 Twitter followers.

“The first year has really been about laying the foundation, growing the community at a more organic level,” she said. “We’ve kind of ridden under the radar.” The next year will include more live events and collaborations with stations.

Thompson, also the night’s emcee, recounted the moment when he found out Michael Jackson had died, while Thorn told of his father’s experiences with hallucinogens. Afterwards, the band Johnnyswim played for the crowd of sharply dressed young professionals, which numbered more than 60 despite the event’s location more than a mile from the hub of SXSW activity at the Austin Convention Center.

Deabler, who conceived the event, sees storytelling as a way to connect with millenials. “Storytelling really resonates with this generation,” she said. “That’s where the overlap really happens with NPR, because NPR was about storytelling before storytelling was really cool.”

Deabler began as NPR’s only employee working on Generation Listen but has added another full-time staffer and an intern in the past year, thanks to funding from the NPR Foundation. In the coming year, Generation Listen will track progress via social media engagement and attendance of live events, she said.

As the event wound down, an audience member expressed her appreciation to Deabler. “I’m going to tweet up a storm,” she said.