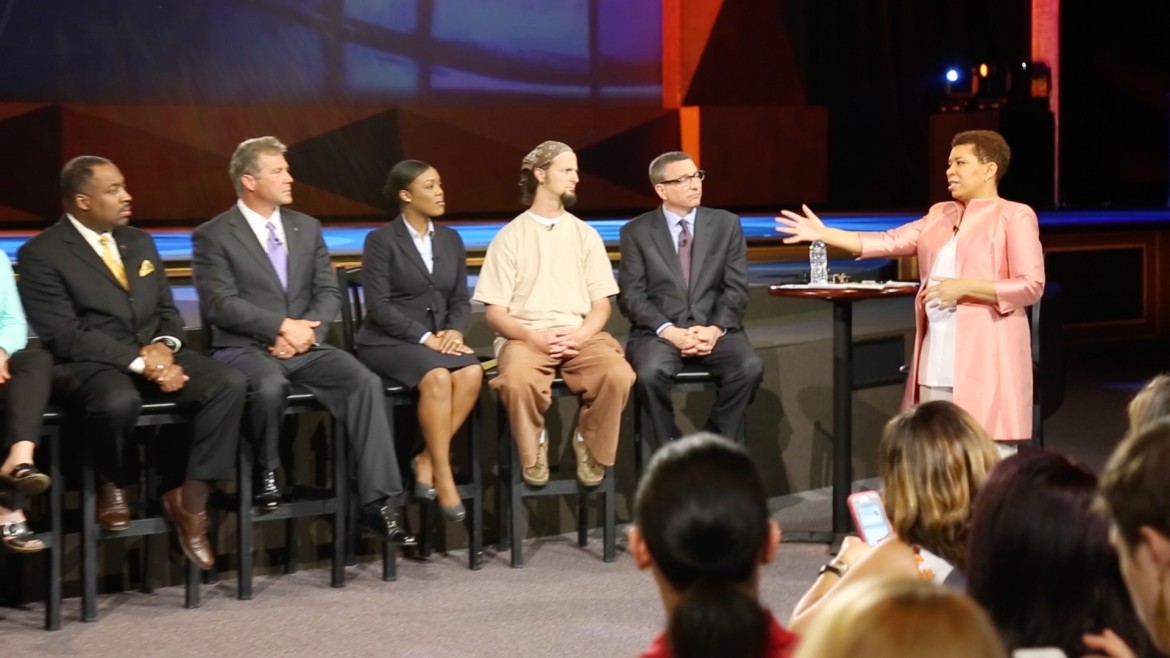 PBS continues to defy bullets with words, resuming a conversation that its programmers hope will gradually bring opposing sides of the gun debate closer together.

Armed in America, a two-night primetime event that aired last week on PBS, presented nuanced perspectives of less-discussed aspects of the debate — religion and the militarization of police. Documentary films from Independent Lens anchored each night. Peace Officer and Armor of Light follow the passionate and painful transformation of, respectively, a Midwestern sheriff and an evangelical preacher into different kinds of anti-gun crusaders.

Each film was followed by a town-hall program originating from the Northland megachurch in Longwood, Fla. Michel Martin, weekend host of NPR’s All Things Considered, moderated both broadcasts, aiming to broaden the discussion beyond the views expressed in each film.

The May 9–10 special broadcasts, PBS’s fourth in three years bringing different takes on one of the country’s most hotly debated issues to viewers, was produced by New York City–based Lincoln Square Productions. It resulted from a confluence of trends at PBS: greater focus on news and current events coverage under Marie Nelson, v.p. of news and public affairs since 2014, and PBS’s promise to do a better job of highlighting independent films in prime time.

Producers chose to mount the town hall in Florida because the “issue of gun violence has been front and center” there, Nelson said. “It’s an interesting place to explore this, in a setting that has dealt with policing issues and where there is a [large] evangelical community.”

The state’s controversial “stand your ground” law allows residents to shoot to kill if they perceive a threat to their lives or property, with no obligation to retreat or to flee. That law is the leitmotif of Armor of Light.

The film by Abigail Disney (Pray the Devil Back to Hell; Women, War & Peace; The Invisible War) traces the spiritual journey of the Rev. Dr. Robert Schenk, an aggressively conservative evangelical minister in Washington, D.C. He became widely known in 1992 for carrying a preserved fetus in his outstretched hands during a pro-life rally in Buffalo, N.Y., an event captured on news footage and included in the film.

Later, his unquestioning affinity with Tea Party politicians he ministers to in Washington, D.C., is shaken after a series of mass shootings — particularly the 2013 murder of 12 people at the Washington Navy Yard, near Schenk’s home. He finds it increasingly difficult, and ultimately impossible, to reconcile gun ownership with Christian principles, specifically Jesus’ teaching to love your enemy, and God’s commandment “Thou shalt not kill.”

Disney began working on the film early in Schenk’s transformation. Cameras were rolling when he first met Lucy McBath, the mother of Jordan Davis, an unarmed teenager who was murdered in Florida in 2012. Davis’ killer, Michael Dunn, cited stand your ground laws in his legal defense but was eventually sentenced to life in prison. McBath, herself extremely religious, became a vocal anti-gun activist and national spokesperson for Moms Demand Action. She and Schenk found mutual comfort and moral support along the parallel journeys that Disney weaves together in the film.

In American society today, Schenk says in the film, owning a gun implies something terrifying: that there is “a narrow band of good people whose lives are valuable … and a whole group of people whose lives don’t matter. And that’s contrary to God’s love for all of us.”

“I had always assumed that you err on the side of preserving life, that we all felt that. Even if it’s a criminal or a malefactor” in the line of fire, he said.

The film also explores links among the Republican Party, evangelical Christians and the National Rifle Association and looks at a culture of fear that drives gun ownership. Armor of Light premiered at the Tribeca Film Festival last year and was released theatrically in October.

Lawrence established his town’s first police SWAT team in 1975, joining a move by municipalities spooked by riots, gangs and drugs to embrace military-style policing tactics. More than 30 years later, Lawrence’s son-in-law Brian Wood, 36, was gunned down by the very SWAT team he had created. Brian died violently — 111 rounds of ammunition, tasers, explosive grenades and pepper spray — and needlessly. He was on the ground, wounded and trying to surrender. Lawrence, who was retired, witnessed the shooting.

Wood had been prone to fits of anger. After a violent dispute with his wife, Lawrence’s daughter Liz, he called 911 to turn himself in. But then, distraught, he retreated to his truck with a loaded gun before they arrived. He fired several rounds at a fence outside the car window. At the end of a daylong standoff, Brian had exited the car and fallen to the ground and an officer shot him in the back of the head with a rifle as he was face down and injured.

Appearing in the film, Liz Wood was adamant that there was no reason for him to die.

Shock and horror at witnessing the trauma of Wood’s death transformed Lawrence into an outspoken opponent and tireless investigator of the militarization of local law enforcement. He travels throughout Utah, using his long experience as a crime-scene investor to analyze bullet slugs and advocate for full disclosure in cases of aggressive police action.

The film describes how the war on drugs emboldened the use of heavily armed SWAT teams to smash down doors — sometimes the wrong ones — with no warning in the middle of the night and shoot to kill at any sign of resistance.

Brian Wood’s father, Jerry Wood, who was also at the scene, said the mission against his son took on a life of its own, impenetrable to logic.

“I kept telling them ‘Let me talk to Brian, I can calm this situation.’ But once this machine started going in this direction, there seemed to be no way to stop it or shut it down. It had become a military operation,” said Brian’s father in the film.

Scott Christopherson and Brad Barber directed Peace Officer, which won both the Grand Jury and Audience Awards for Best Documentary at the SXSW Film Festival.

Bringing in other voices

Both films came down squarely on the same side of the gun issue, and the town-hall follow-ups sought balance. Schenk and Lawrence each participated on the nights that their documentaries were featured, joining panels of law enforcement officials, pastors and advocates for and against gun control in front of a live audience.

Moderator Michel Martin said the town halls, while clearly companion pieces to the films, were meant to stand on their own, “moving away from specific incidents to a conversation about public policy.”

“I feel that the town halls were committed to allowing people to offer different points of view,” Martin said. “The hope is that we explained the issue and gave people an understanding of the ramifications that they might not have considered.”

In Armed in America: Faith & Guns, a panel with strong religious beliefs debated whether carrying a gun expressed Christian values by protecting the innocent — oneself and others — or contradicted Jesus’ teaching of preserving life and loving one’s enemy.

“One of the things we get hung up about is that we should not murder, period,” said panelist the Rev. Kenneth Blanchard, author of Black Man with a Gun. But “I believe that lambs have teeth,” he said. “Everyone, everything, from an amoeba on up has the ability to protect itself on some level.”

Panelist Karen Swallow Prior said she takes a handgun when she runs on isolated grounds around her house. She is a professor at Liberty University, where President Jerry Falwell Jr. has encouraged students to carry concealed weapons on campus. She can’t imagine shooting someone, she said, but has no religious qualms about the possibility.

“I don’t think that being willing to sacrifice your life and your faith is the same as letting someone abduct and rape and kill you,” she said.

Armed in America: Police & Guns featured both wrenching stories of lives destroyed and avowals by law enforcement officials that heavily armed police save lives. One audience member described how a SWAT team rescued her daughter from a violent hostage situation. Others recalled tragedies and deaths resulting from no-knock raids, including the burning and disfigurement suffered by a toddler after a policeman threw a flash grenade into a crib.

“The vast majority of SWAT missions end peacefully, but they don’t make the 5 o’clock news,” said panelist Susan Rahr, former sheriff of King County, Wash., and director of the Washington State Criminal Justice Training Commission. She acknowledged that some SWAT teams “are badly trained and operate poorly.” Municipalities may lack the funds to provide proper training for the high-grade weapons that their police began accumulating in earnest in 1997, when the U.S. military first started giving out used equipment to civilian law enforcement.

“The reality is we don’t track the use of SWAT teams,” said panelist Anthony Batts, former commissioner of the Baltimore Police Department.

PBS programmers have tried various approaches to covering issues related to guns and police violence since 2013.

A special series of documentaries commissioned and broadcast weeks after the Sandy Hook Elementary School shooting in Newtown, Conn., aired across a week of prime time. In 2014, a town hall special America After Ferguson, moderated by the NewsHour’s Gwen Ifill, explored the social divides illuminated by Michael Brown’s death in Ferguson, Mo.

Ifill also moderated America After Charleston, a September 2015 town hall addressing the fatal shooting of nine African-American parishioners by a white gunman in Charleston’s Emanuel African Methodist Episcopal Church. These town halls were co-produced by WGBH in Boston; WETA in Arlington, Va.; and local stations in each host city.

“PBS has really been engaged and committed to exploring the issue of gun violence, so we are maintaining that drumbeat” with Armed in America, said Nelson. When the two documentaries became available to PBS, she saw an opportunity to explore the issue in-depth in news programming and create “linkage” across the two nights.

Armed in America also grew out of the commitment PBS made last year to filmmakers to “elevate POV and Independent Lens,” said Lois Vossen, e.p. of Independent Lens for the Independent Television Service. The prime-time debut of The Black Panthers: Vanguard of the Revolution, which aired in February, was the first such collaboration, she said.

Looking ahead, ITVS and PBS are considering Newtown, interwoven testimony of those impacted by the tragedy filmed over three years, and Tower, which revisits the sniper shooting at the University of Texas at Austin in 1966, among others, Vossen said. Plans for supplemental programming, such as the Armed In America town halls, and events that could build off the energy of premieres and film festivals are also under consideration.

“The hope and the goal, certainly” is to keep the special presentations flowing, she said.

One thought on “Documentaries, town hall expand PBS’s look at guns in America”