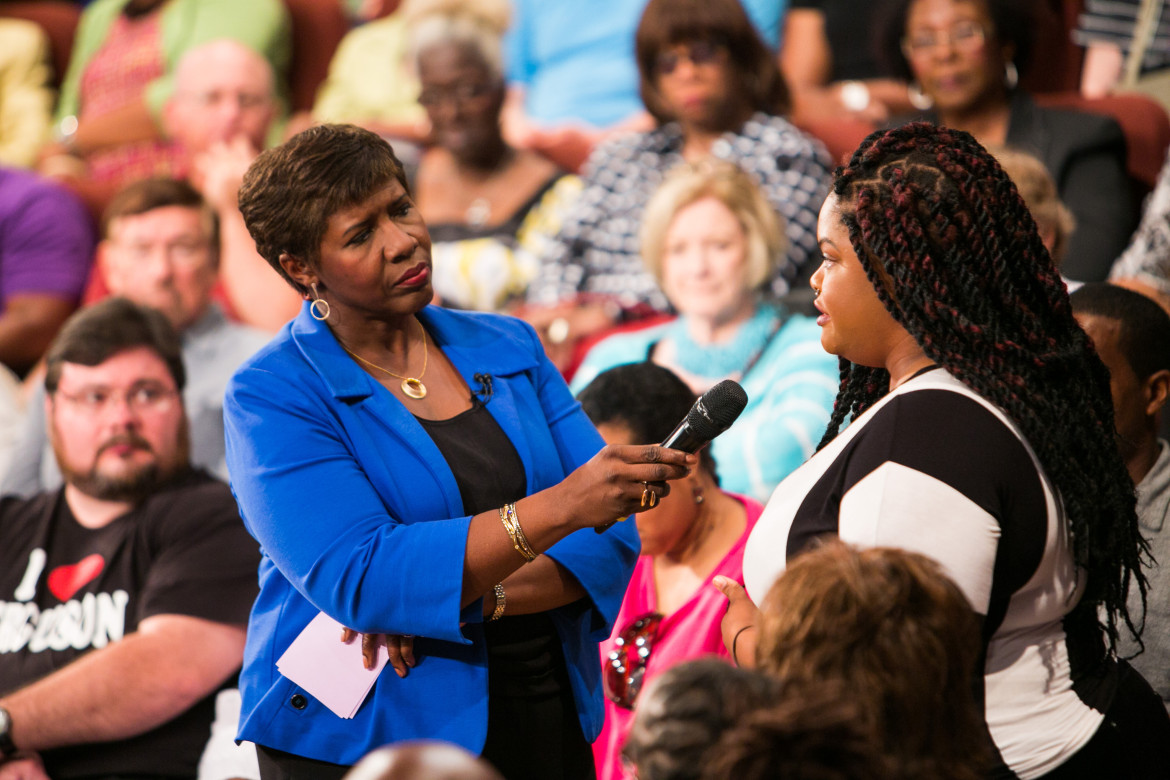 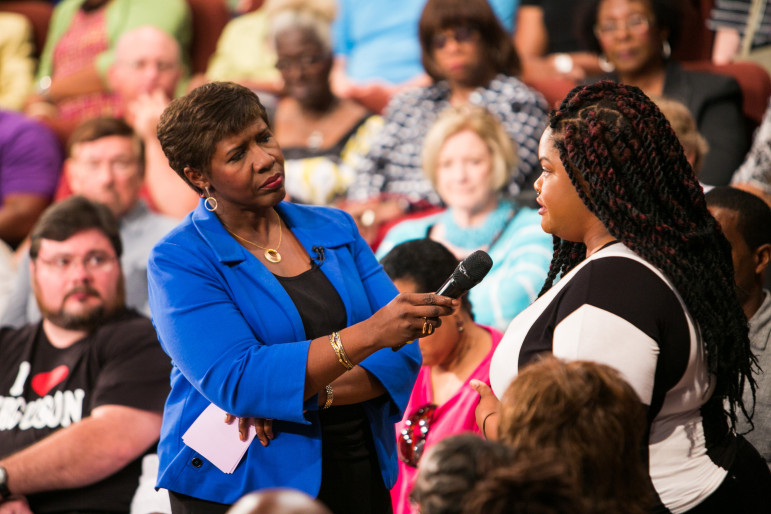 America After Charleston may have charted new territory for PBS.

The televised town hall about race that aired Sept. 21 boasted a social media and digital campaign that was one of PBS’s most dynamic, incorporating video clips and GIFs on social media and creating features exclusively for social media use, such as question graphics, Instagram posts with audio and short-form video shot outside the taping. The push on Facebook, Twitter and Instagram started weeks before the show and is still going.

The program’s eclectic mix of contributors from across public television — PBS NewsHour and Washington Week and producers from WGBH in Boston, South Carolina’s ETV Network and WETA in Arlington, Va. — could also suggest a roadmap for how public TV can offer more news with national and local entities working together.

America After Charleston was taped Sept. 19, two days before the national broadcast of the show. Gwen Ifill, NewsHour co-anchor and managing editor, moderated the discussion with an audience of 250 selected with help from staff at South Carolina ETV.

Dando led the social media push for Charleston along with Tory Starr, director of social media, national programming at WGBH.

America After Charleston was modeled on a similar show, America After Ferguson, a fall 2014 town hall production on race and justice that generated 1.1 million tweets. The Charleston, S.C., special sought to expand the discussion initiated in Ferguson both on air and online.

“We wanted to use social media to push even more, to inform the conversation from the very beginning,” said Starr. The digital team behind America After Charleston created a three-pronged strategy to engage audiences before, during and after the broadcast.

PBS posted videos on the show’s website and questions on its Facebook page that were addressed during the TV show. Selected Facebook comments and tweets were featured live on air, and social media used the hashtag #AfterCharlestonPBS. Facebook also provided the Charleston production with exclusive data about trends in Facebook engagement around race issues — material that was incorporated into the broadcast.

At the taping, the digital team “physically handed out flyers . . . saying, ‘This is how you can join the [social media] conversation,’” said Starr. Her team asked audience members to weigh in on questions being tackled at the town hall and edited the footage into short-form video for PBS’s Instagram.

The digital push may be a boon as PBS seeks to attract younger viewers.

“I can look at people following it on Facebook, Twitter and PBS Digital, and they are many years younger than the [TV viewing] audience,” said Dando. “When the hashtag goes on the air — as soon as it goes on the air — within 15 to 20 seconds the Twitter conversation explodes. They have their phones in their hands and their tablets in their hands.”

The social media component was essential, agreed Linda O’Bryon, president of South Carolina ETV. “People were commenting throughout the program,” she said. “It was sort of a virtual town hall . . . in Ferguson, in Charleston, and in every city.”

She called the production “a terrific collaboration” of national and local partners.

Marie Nelson, PBS’s v.p. of news and public affairs, has prioritized this kind of partnership. Town halls, she said, can “tie the strength of what we are doing nationally to what we can do at the local level, with the local stations, and fold back in with the national voices.”

“It gives us a chance to work closely with member stations, which is always a goal,” she added. “And it helps us, as a system, to develop more of a short-turnaround capacity to address major news events. That is certainly a goal of ours.”

Similar projects are underway, Nelson said. She mentioned one in the works for next spring but declined to elaborate. “We are committed to doing these programs,” she said. “We are working with our partners to identify the issues and stories that we think would be the right fit.”

Nelson was struck by the enthusiastic response of local station staff in Charleston. “They said it was such a fantastic experience to work with a team . . . of national experience on a large-scale news production. They said, ‘It gives us a lot of ideas about how we want to continue to do this work in our local markets,’” Nelson said, adding, “That’s when we’re at our best.”

She credits PBS programming chief Beth Hoppe for creating ways for PBS to weigh in on big news events. NewsHour is only one show, and local stations have limited news capabilities.

Under Hoppe’s guidance, the network put together a week of programming tied to the shooting at Sandy Hook Elementary School in Newtown, Conn., in late 2012, including features on NewsHour, and documentaries from Frontline and Nova and other producers. The package was unusually newsy and timely for PBS — even if it aired two months after the shooting.

America After Ferguson aired the month after Michael Brown was killed by police. America After Charleston was broadcast three months after a white supremacist killed nine people at the Emanuel African Methodist Episcopal Church. Producers involved with the latter production attributed the delay to logistical issues and the community’s need for time to heal.

To facilitate an ongoing conversation about this type of production, Nelson holds biweekly conference calls during which “stations or organizations spread around the country . . . can be looped in on what’s coming down the pipeline and how we can work more effectively,” she said.

Those calls are enormously useful, said Denise DiIanni, senior executive in charge of WGBH’s Boston Media Productions, which develops local and regional content, including Charleston. “There’s NewsHour, Washington Week, my team, the Nova team sometimes, the documentary community,” DiIanni said. “And Marie is bringing in other players. It’s been going for a few years, but she’s ramped up the urgency.”

“The production of local news is expensive, particularly in television, and we have all seen what has happened to the news industry at large,” Nelson said.

She cited the CPB-funded Local Journalism Centers as another way to foster partnerships.

Upcoming presidential elections may provide a catalyst for programs that respond to local news. “This year we have some exciting projects that will allow us to get out in the field quite a bit more and work with stations and stations’ news operations,” Nelson said.