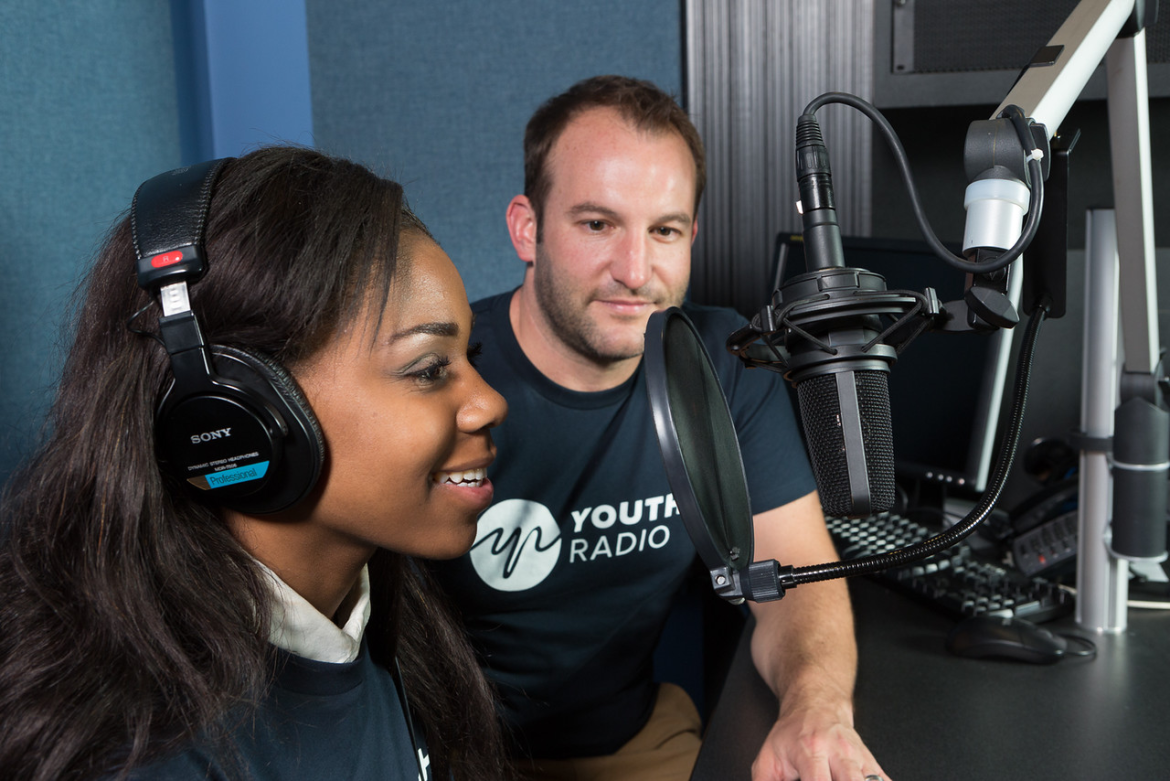 Youth Radio has passed a big test. For the first time in the nonprofit’s 24-year history, it hosted a nationally syndicated radio program. And not a small one either.

For one week, Youth Radio played a starring role in the most–listened-to news radio show in the country, NPR’s Morning Edition. The week of special broadcasts came off without a hitch, despite a news cycle that could have derailed the whole experiment. Now Youth Radio is looking to capitalize on the success.

At 8 a.m. on a Thursday, the Youth Radio offices were unusually crowded. It was March 24, the second-to-last day of a weeklong Morning Edition residency in its studios. Even though it was early in the day, Youth Radio had invited guests to celebrate.

Donors mingled with Youth Radio’s executives and production staff. There was a catered breakfast. Guests nibbled on frittatas and drank virgin Bloody Marys. Morning Edition host David Greene, the celebrity of the week, was ushered here and there through the crowd.

Greene had come from Washington, D.C., to anchor the show for the week and present segments featuring Youth Radio producers. Despite the celebration, many of the reporters, all in their teens and early 20s, were still working. Some took photographs; others made videos with their iPads and shared them on Twitter. Desmond Meagley sat at a table, scribbling questions on a slightly crinkled piece of yellow notepad paper.

The 19-year-old hoped to interview Greene and get some advice about a career in journalism. But Greene was in high demand. He was supposed to give a little speech about the week and how the idea for the broadcast developed about a year ago. Just as Meagley thought he might get his chance, Oakland’s mayor arrived.

Youth Radio’s studios are in downtown Oakland, Calif. Like many of the startups now moving to the city, the remodeled brick building has an open, spacious lobby. Downstairs, televisions play videos made by Youth Radio reporters. There are rows of Apple computers, a glass conference room and a wall of plaques thanking sponsors. Upstairs are studios, offices and shelves lined with Peabodys, Murrows and a host of other prestigious awards.

Youth Radio has an educational mission: It introduces kids to journalism along with work skills like computer programming and graphic design. Students like Meagley volunteer and can eventually work as reporters paid minimum wage.

Meagley says his social worker recommended the program, thinking it might help with his depression. In the two years since he arrived, Meagley has written commentaries, conducted interviews and produced stories for outlets like Morning Edition. Now he’s at a local community college and considering a future in radio.

Greene says he was impressed by the freshness of Youth Radio’s sound when he visited last year. That’s when he and Rebecca Martin, Youth Radio’s managing editor, came up with this “crazy” idea of broadcasting Morning Edition from the studios. Martin and Greene saw it as an opportunity to change the feel of Morning Edition for one week. To do that, they wanted to do more than just play a few Youth Radio stories. A lot more.

Martin and Greene tried to inject Youth Radio’s sound throughout each edition of the show. All week the staff picked new songs to play between stories. Youth Radio reporters took the mic at the top of each hour to announce the date and notable birthdays. The shows featured stories and commentaries by Youth Radio reporters — pieces by young people about young people. There were stories about teen girls and social media, young adults searching for public housing and teen depression.

The plan was to end Friday, March 25, with a roundtable on issues important to young people. But then, on the broadcast’s second day, terrorist attacks hit Belgium.

Greene thought the producers might shift the show back to Washington for logistical reasons alone. But that didn’t happen. NPR kept Greene rolling in Oakland while anchor Steve Inskeep worked from Washington. “It was literally seamless,” Greene says, “I don’t think I have done a show remotely, or even in D.C., when nothing has gone wrong.”

Reaching the next generation

In recent years, NPR has struggled to retain younger radio listeners. According to Gwynne Villota, a senior research manager at NPR, between 2010 and 2015 Morning Edition had a 20 percent drop in average–quarter-hour ratings among listeners under 55 years old. Greene says he saw broadcasting from Youth Radio “as a way to drive home the message that we really can connect with younger people.” For Youth Radio, hosting Morning Edition has been a way to spotlight the organization’s variety of media talents and its long-term plan.

On the week Morning Edition took up residency, Youth Radio launched an interactive, multimedia piece about gentrification. The story is an example of how the nonprofit has branched out from audio over the years. Now Youth Radio makes videos, works across social media platforms and even builds apps.

Martin says the big goal is to create a new national network where young people create and consume content. While Youth Radio hopes to build the future of youth media, its reporters hope to get jobs in journalism as adults. And some are worried.

Youth Radio reporter Kasey Saeturn says her parents, who emigrated from Laos, don’t understand why she is in radio. “They are like, ‘Why are you doing this?’” Saeturn says, “‘It’s not making enough money.’”

Saeturn isn’t sure whether she can get a journalism job, and even if she does, she doubts that it will pay enough to live in the Bay Area. So while she loves radio, she is also looking into a career as a cook.

At around 10 a.m., Meagley finally got his chance to interview Greene. The other young reporters crowded in to watch the two talk. Meagley asked his questions confidently and kept up with Greene’s banter.

Meagley says he can’t believe someone is paying him to do stuff like this, to be creative. “That’s so rare for a young person without a college degree,” Meagley says, “I am just eating it up with a big spoon.” He, too, is concerned about making a living as a journalist, but in the meantime, he says, he’s trying to enjoy an opportunity that so few young people like him ever get.

Correction: An earlier version of this story incorrectly reported that fewer listeners under 55 are tuning into Morning Edition. The decline measured for the age group was in the amount of time spent listening, or average–quarter-hour ratings.