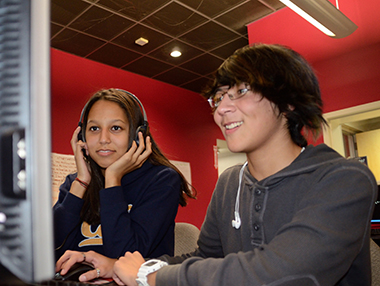 In planning a redesign of its website, nonprofit media organization Youth Radio sought to highlight the social and training services it provides to Oakland-area teenagers, in addition to the content its youg students produce. (Photo: Brett Myers/Youth Radio)

In planning a redesign of its website, Youth Radio sought to highlight the social and training services it provides to Oakland-area teenagers, in addition to the content its young students produce. (Photo: Brett Myers/Youth Radio)

The nonprofit organization’s social work activities include academic and career counseling and providing guidance on nutrition, according to Richard Raya, executive director.

The revamped YouthRadio.org gives equal weight to the organization’s news coverage, classroom activities and Creative Studio, a venue for program participants to showcase original projects, such as teen-penned raps and a Trayvon Martin–inspired mural, created with the help of Youth Radio mentors.

Youth Radio won’t increase the amount of content it produces for the site, but the new layout makes it easier for the organization to publicize its current output and archive, Raya said. Top navigation bars are locked in place for easy access as visitors scroll through, and each page has its own section-specific search bar.

“A lot of people know us through the stories that they hear on NPR, and they don’t fully get everything that we’re doing until they walk into our building,” Raya said. He wants the new website to mimic an “in-the-building experience.”

Youth Radio contracted with Front Group Design, a two-person web operation headquartered next door, for the redesign. It took four months to design the layout, which incorporates parallax scrolling, a feature that allows one half of a web page to remain stationary while a user scrolls through the other half.

Raya, who began directing the organization in January, wants YouthRadio.org to become a destination site for both adults and teenagers, and he is considering selling ads on the site.