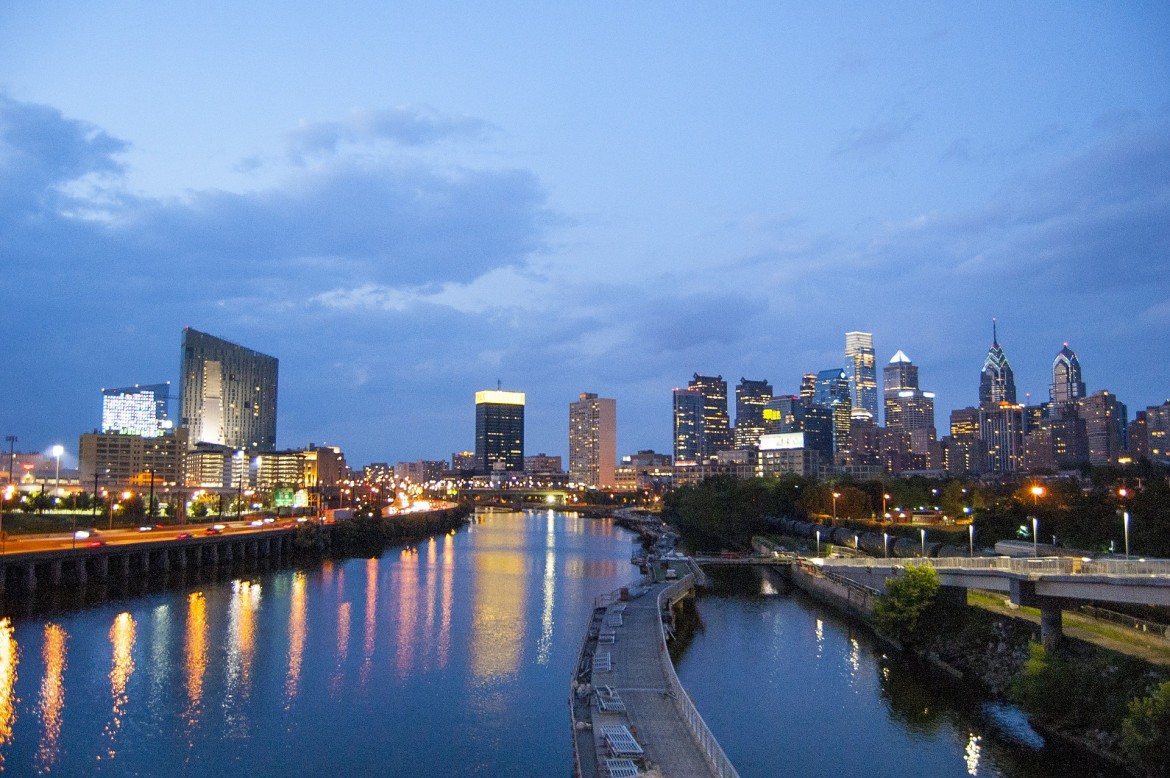 At a time when declining advertising revenues have made nonprofit business models look promising, Philadelphia’s media landscape is adapting to a puzzling new conception in the newspaper business.

Early this year, the owner of the city’s two legacy daily newspapers announced he was donating the company to The Philadelphia Foundation. The Philadelphia Media Network, which includes the Philadelphia Inquirer, tabloid Philadelphia Daily News and Philly.com, became part of the brand-new nonprofit Institute for Journalism in New Media, which was created to house the publications within the foundation. Along with the publications, PMN owner H.F. “Gerry” Lenfest donated $20 million to establish an endowment to fund the newspaper through the institute.

PMN continues to operate as a self-governing for-profit, only now it is a public benefit corporation like the one This American Life transitioned into last year. As a “B corp,” PMN is permitted to put a reasonable percentage of its profits back into a service mission. This is a unique structure for a daily metropolitan newspaper.

Day-to-day newsroom operations remain the same as before the ownership change, says Terry Egger, PMN c.e.o. His charge also remains the same, he says: Find ways to return the newspapers to profitability. The institute’s role is to approach donors to fund special tax-exempt public interest reporting projects, along with experiments with revenue strategies.

“It allows this to be a working lab, if you will, and the benefits hopefully to be shared with the entire industry,” Egger says.

Does its nonprofit ownership mean that PMN’s properties should be considered “public media”? William Marrazzo, president of Philadelphia’s WHYY, answers the question with an emphatic “no.” Both he and Egger agree that their organizations cater to different news audiences: PMN is focused on daily breaking-news coverage, while WHYY, a dual licensee that operates an online news site, prides itself on going in-depth on specific topics.

In Marrazzo’s eyes, WHYY’s newsroom also distinguishes itself as a nonprofit media entity with its emphasis on civic engagement and “off-air” community events.

But others see a blending of the lines that once clearly separated public from ad-supported news organizations. At the very least, PMN now “has to be seen as another entrant into a rather vibrant economy of publicly supported newsgathering activities,” says Vincent Stehle, executive director of the Philadelphia-based Media Impact Funders, a network of philanthropies that support media and technology projects. Now multiple newsrooms in Philadelphia are looking for large-scale donor support, distinguishing their news operations as distinct yet equally necessary public services in the process.

“I’m not worried about competing for local news funders,” Jim Brady, Spirited Media founder and c.e.o., told Current via email. “I do think there’s a difference in what everyone in town does. Whether it’s the primary medium, economic model, staff size, voice, target audience or whatever, the approaches all vary and will hold different appeal to different funders.”

How we got here

Newspapers operating under nonprofit structures remain a rare sighting. Past examples offer cautionary tales for PMN and the institute.

The St. Petersburg Times (now the Tampa Bay Times) became a taxable subsidiary of the media learning center Poynter Institute in 1978, donating shares of what was then a highly profitable newspaper business toward Poynter’s operations. But the paper no longer turns enough of a profit to pay dividends to support the institute. Despite winning six Pulitzer Prizes in the last decade, the Tampa Bay Times has hemorrhaged half its staff in that same time. Poynter was caught in its tailspin, operating at deficits of $3.48 million in 2013 and $2.26 million in 2014 before selling a plot of land to help balance its books.

“If the way they were running the newspaper was successful, nobody would be giving it away.”

Across the pond, the U.K.’s The Guardian operates under a public trust. But after investing heavily in innovation efforts, the paper has been unable to generate enough revenue. It plans to cut 20 percent of expenses over the next three years.

For-profit newspapers, including PMN’s dailies, have struggled under the same financial pressures. The Pew Research Center’s State of the News Media report estimates that industry-wide print ad revenue has declined from $47.4 billion in 2005 to $16.4 billion in 2014. Many daily major papers, including the Cleveland Plain Dealer and the Detroit News and Detroit Free Press, have cut frequency of their print editions or home delivery.

PMN has gone through several downsizings and leadership changes over the past decade. Last fall the Philadelphia Business Journal reported that PMN lost $90 million in advertising revenue between 2011 and 2015.

Lenfest bought PMN at an auction in 2014, paying $88 million. A few days after the sale closed, his bidding partner, Lewis Katz, died in a plane crash. Lenfest stepped down as publisher in August 2015 after hiring Egger from the Plain Dealer to run the company.

Less than three months later, 46 journalists across the company were laid off as the three newsrooms merged. The newsroom staff is currently “over 250,” according to PMN spokeswoman Amy Buckman. Lenfest unveiled his plan to donate PMN to the foundation in January.

Nonprofit ownership structures could become a new trend for legacy print media as traditional revenues like advertising and circulation continue to decline. But Alan Mutter, a former newspaper executive and author of the “Reflections of a Newsosaur” blog, cautions that switching to nonprofit status is not a magic bullet toward financial solvency.

“At the end of the day, it’s a zero-sum game: You can’t spend more money than you take in,” Mutter told Current. He pointed to The Guardian’s recent financial troubles as an example. “These are guys who sort of thought, ‘Well, because we’re living in the nonprofit world, anything goes.’ But that’s not true, because gravity applies whether you’re a for-profit or not-for-profit business.”

PMN’s “B corp” structure carries promise, Mutter says, noting that such companies “will make decisions that are less oriented to making money and that are more oriented to the long-term strategic development of the enterprise.”

But such thinking would require a total reworking of the newspapers’ organizational structure, he says. “To just say, ‘We’re going to take the newspaper as it is today and kind of tweak it around the edges to keep it going in the future,’ is probably not a very thoughtful strategy. … If the way they were running the newspaper was successful, nobody would be giving it away.”

Four months into its restructuring, PMN has no plans to launch the sort of membership programs or major-gift fundraising campaigns that are the lifeblood of public media stations, according to Buckman. The institute intends to raise money to build on Lenfest’s endowment, but those efforts have yet to materialize.

The institute’s 10-member board will make decisions about how PMN will raise and invest philanthropic gifts as a public service. The board includes Lenfest, who serves as chairman; Pedro Ramos, president of the Philadelphia Foundation; and David Haas, vice chairman of the Philadelphia-based Wyncote Foundation, which also supports WHYY (and Current). Six of the remaining members are drawn from academic institutions and journalism schools in Philadelphia and New York. David Boardman, dean of the School of Media and Communication at Temple University, is on the board, as Sarah Bartlett, dean of the Graduate School of Journalism at CUNY.

Chris Satullo, former v.p. of news at WHYY and former editorial page editor for the Inquirer, cautions that the board needs to “evolve its membership” as soon as it can. “It’s serving in Philadelphia, a city that is majority-minority, and that diversity is not reflected at this point in the makeup of the board,” he told Current. In addition, he says, the board should look to expand its membership beyond academia and philanthropy: “There’s not a ton of hands-on digital experience there.”

The board has met twice, as recently as April 11, mostly to begin organizing themselves, according to board member Rosalind Remer, a vice provost of Drexel University. The board will devise protocols for fundraising, which will then be executed by institute staff. They plan to hire an executive director to run the institute, she says.

“The institute will not engage in general fundraising, but instead look for funds to assist in supporting specific projects as they arise, in order to maximize support,” Remer wrote in an email. She isn’t concerned about cannibalizing WHYY’s donor base, as the pubcaster’s funders “are, by and large, not focused on journalism.”

“It could be argued that we could be broadening the pool of potential support by looking beyond Philadelphia.”

“While we may look to some of the same funders for specific projects, it’s likely we will be identifying potential funders with a specific focus on journalism and innovation in journalism, some of which have never, or rarely, funded projects in Philadelphia,” Remer says. “It could be argued that we could be broadening the pool of potential support by looking beyond Philadelphia.”

Despite his career in the competitive battleground of for-profit print media, Egger has no desire to compete for public media’s donors. “I think that if it were a wrestle over the same dollar between us and WHYY or others, that would be a mistake,” he says.

Egger does hope to educate PMN’s readership about the public interest nature of the daily news business.

“Public radio and public television, there’s such an understanding of how vital they are in a community,” he says. “There is donation support because of that, and there’s an understanding there … What isn’t as well-known are the challenges traditional for-profit media faces, and the fact that if that traditional for-profit media fails, then the biggest journalism voice in the community is in danger.”

WHYY has collaborated with PMN before, including on coverage of the 2015 Philadelphia mayoral campaign. The station’s philosophy for in-depth coverage — one of the things Marrazzo says distinguishes it from PMN — has extended to its work with subject-specific media groups like urban planning site PlanPhilly, which it acquired in 2015.

Since 2011, WHYY has also operated NewsWorks, a local news website that incorporates the station’s broadcast journalism pieces alongside digital-exclusive news and opinion. A Philly resident can visit either NewsWorks or Philly.com in the morning for the latest news, but will usually find different sorts of stories.

Looking at WHYY’s financial metrics, it’s easy to see why its nonprofit status could appeal to a media owner looking for a new business model. According to station spokeswoman Lisa Bien, WHYY’s net assets and membership have grown over the last nine years. Major donor revenue grew 16 percent in the first half of fiscal 2015 versus the same period the previous year.

“The stream of unrestricted revenue through this place has grown year over year, making it easier for us to invest in our newsroom without always having to go to a not-for-profit charity to do so,” Marrazzo says. “Which limits the concern anyone would have about WHYY’s editorial control of its news product.”

Poynter media analyst Rick Edmonds, a former Inquirer reporter, sees no immediate danger of PMN and WHYY going into direct competition. “Theoretically, at some point you could say those organizations are relatively similar. But I think that’s quite a few years off,” he says.

Correction: Due to editing errors, an earlier version of this story cited an incorrect number of Pulitzer Prizes won by the Tampa Bay Times. The newspaper has won six Pulitzers, not four. The story also gave the incorrect name of Jim Brady’s media company. It is Spirited Media, not Spirit Media.

2 thoughts on “As Philadelphia newspapers turn to nonprofits, who is ‘public media’?”