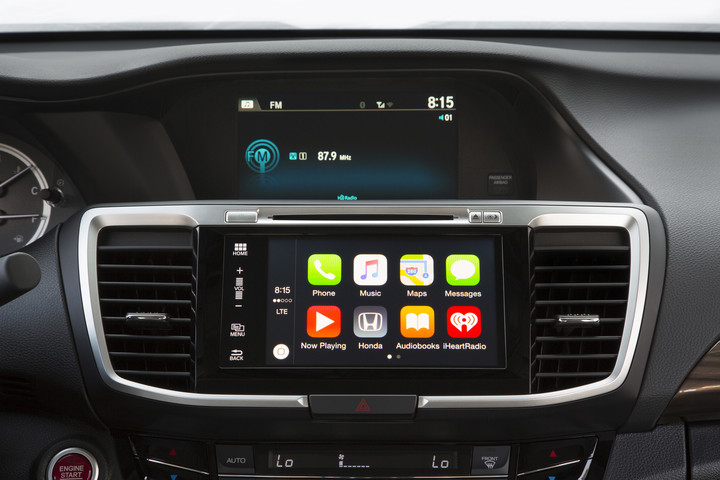 A 2016 Honda Accord equipped with Apple CarPlay. (Photo: Honda)

A 2016 Honda Accord equipped with Apple CarPlay. (Photo: Honda)

Radio industry executives gathered last week in Detroit to consider their medium’s future in connected cars, where tech giants such as Apple and Google are emerging as gatekeepers to contend with.

Staged by Jacobs Media and Radio Ink magazine, the third annual Dash Conference drew 225 attendees to a Detroit hotel Wednesday and Thursday. Early in the conference, attendees got a glimpse of a perilous future for terrestrial radio in the car, where auto manufacturers’ deal-making is shaping options available to listeners.

BMW is the latest carmaker to announce the inclusion of Apple’s CarPlay and Google’s Android Auto systems in its cars, joining Chevrolet, Ford, Honda, Toyota and many others. For radio stations, such deals mean increasing competition for listeners on the go.

If Apple and Google lead the way, radio brands will take a back seat in the future driving experience, said John Ellis, a consultant and former technologist for Ford Motor Company. Ellis also pointed to Alibaba and Tencent, a social network in China, as potential competitors. Meanwhile, stations will be integrated into tech companies’ in-car entertainment systems.

“If the OEMs [original equipment manufacturers] see good response from the customers, they’re going to go down this path,” he said, referring to connected-car systems. “They’re not going to be concerned about your radio ecosystem and your advertising. . . . They’re concerned about selling vehicles.”

“You all should be trying to cut deals with Google and Apple,” he added.

Among public media outlets, NPR has worked to stay on top of connected-car tech. It has built relationships with carmakers to be included in their packages and, more recently, has worked to join Apple and Google’s systems.

But with Apple and Google holding the keys to their systems, some wonder whether they may give other brands short shrift. “If Google and Apple all have their own music services . . . why do you think they would allow competitive services on there?” Ellis said.

The tech giants’ in-car promotion could also sway listeners. “How many people are going to continue to listen to NPR or their local radio stations if, when they plug in, the first thing they see in that car is Apple?” said David DiMeo, director of connected car innovations for FordDirect, a joint digital-marketing venture among Ford and its dealers.

Some Dash presenters emphasized reasons for a more optimistic view of radio’s automotive future. Richard Bressler, c.o.o. of commercial media company iHeartMedia, pointed to a survey that found 99 percent of consumers “comfortable with current AM/FM in-car radio operation” and 91 percent of consumers preferring “physical AM/FM radio buttons and controls built into the car dashboard, rather than AM/FM being an app that appears in the car’s electronic interface.”

An August J.D. Power report also found that some consumers don’t use the new technologies in their cars, and at least 20 percent of car owners surveyed said they didn’t want CarPlay or Android Auto in their next car.

Nonetheless, NPR wants to make sure it’s on both platforms. NPR’s audio app NPR One is on Google’s Android Auto but is not yet part of Apple’s CarPlay. NPR is working on the app’s back end to enable it to run on CarPlay, Joel Sucherman, NPR’s senior director of digital products, told Current. “We expect we’ll be there in early 2016,” he said.

“What we’ve done is start to think about our content not as a shrink-wrapped app that sits somewhere and looks a very specific way in this place and in this place, but to put all of our intelligence into the cloud,” Sucherman said during a Dash session. “And so what the app is really doing lives in the cloud, and then what’s being called to the dashboard or connected TV is really a series of APIs. And that’s where we feel like we can worry less” about individual platform specifications, he said.

NPR One will give member stations a local presence in connected cars, Sucherman said, and NPR is aiding stations by representing them in talks with car and tech companies. But member stations can also pursue companies on their own, he added.

NPR has worked to build its own relationships with car and tech companies, but at a cost.

“As long as you can develop great content and be where people might have a chance to have that content surface, I think you have a good chance of winning,” Sucherman said. But with many competing systems, “it’s been a great challenge, and a very expensive one for a nonprofit . . . to try to navigate the last five years,” he added.

Correction: This post has been updated with the correct days of the conference.