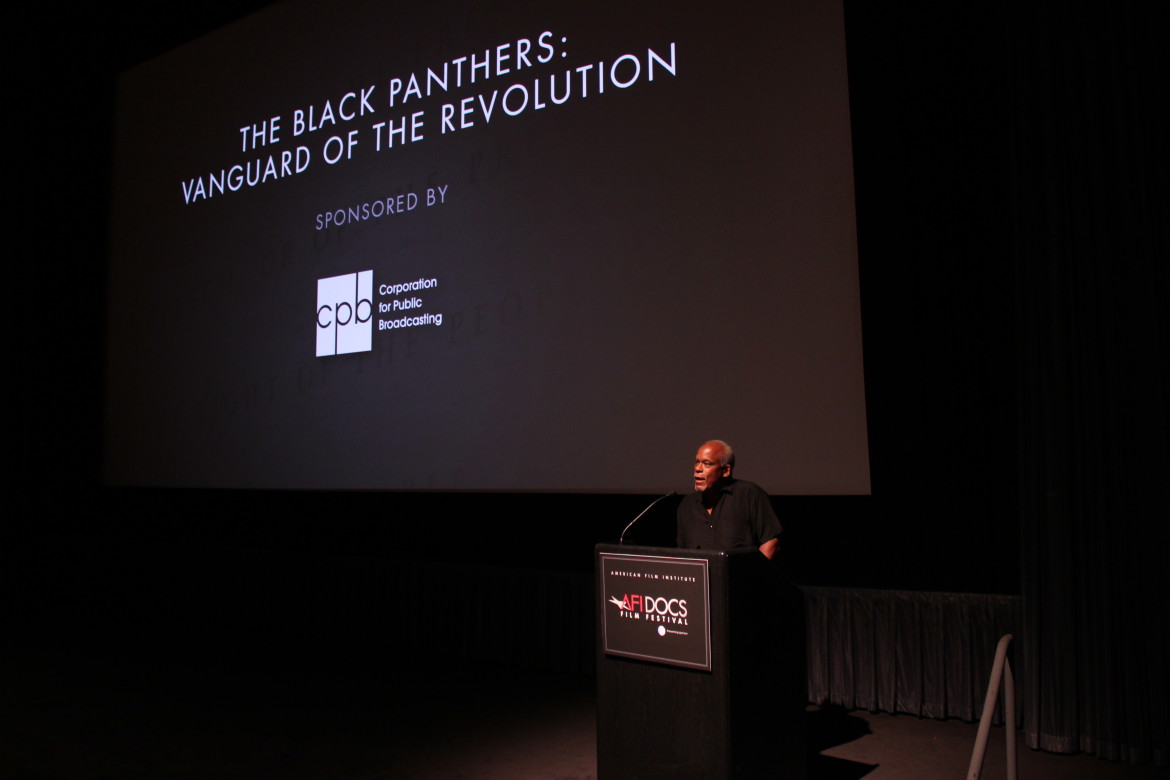 Stanley Nelson welcomes an AFI Docs audience to a screening of his latest film, The Black Panthers: Vanguard of the Revolution.(Photo: AFI) 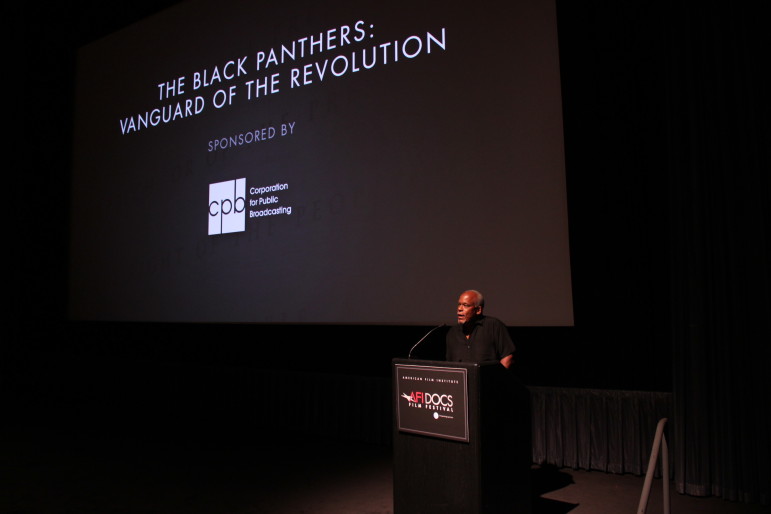 Nelson was the institute’s annual Guggenheim Honoree, a lifetime achievement award that in the past has gone to filmmakers including Errol Morris and Alex Gibney. The Guggenheim Symposium was held June 19 at the National Archives during the AFI Docs film festival. The setting fit: Nelson noted that when he started his career in the pre-Internet era, he relied on the Archives for material.

Nelson has chronicled the black experience for more than two decades, including several films documenting the history of racism in the South. Two days before the symposium, a white 21-year-old male had murdered nine African-Americans, including one who had been featured in a previous PBS documentary, in a racially motivated mass shooting at a historic black church in Charleston, S.C.

Introducing Nelson, AFI President Bob Gazzale made a connection between the attack and the subject of the filmmaker’s 2003 PBS film The Murder of Emmett Till.

Later, Washington Post film critic Ann Hornaday, while interviewing Nelson about his life and work, referred to him as “the premier filmmaker of the black experience in America.” Nelson made a mocking face.

“You can call me whatever you want,” he said, to laughter. But his work and other activities suggest a grain of truth to the claim. Nelson’s production company, Firelight Media, houses a producers’ lab that mentors young documentary filmmakers of color. In February the MacArthur Foundation awarded Firelight Media a $500,000 grant, on the back of a $2.5 million grant from CPB in 2014 to expand its diversity initiative.

AFI Docs also featured screenings of Nelson’s newest film, The Black Panthers: Vanguard of the Revolution, an oral history of the movement told by participants. The movie chronicles the Panthers’ rise to prominence and the FBI’s covert efforts to destroy the organization, including the 1969 assassination of party chair Fred Hampton. Black Panthers is scheduled to air on PBS in February 2016 after a fall theatrical run.

Nelson’s new project fit well into the retrospective — a 1971 documentary about the Black Panthers was instrumental in his education about film. He recounted how he was influenced by Howard Alk’s The Murder of Fred Hampton, a film that blamed police for Hampton’s death.

“That made me see the power of film, and that film could have a point of view,” he said.

While a film student at the City College of New York, Nelson often argued about style with his professor, D.A. Pennebaker, the influential champion of cinema verité. Pennebaker was so enraged by Nelson’s choice to do a fiction film as his thesis that he stormed out of the classroom and told Nelson to assign himself a grade.

A highlight reel at the symposium featured clips from a selection of Nelson’s movies: Two Dollars, Emmett Till, and PBS films such as Jonestown: The Life and Death of Peoples Temple (2006) and the Emmy-winning Freedom Riders (2010).

The 2004 film A Place of Our Own, about Nelson’s upbringing in a middle-class black family, was originally intended to be a study of black resort towns. When funding proved difficult, the movie morphed into the only personal story the filmmaker has told. Nelson recounted how the Independent Television Service, which was funding the film, had to push him to finish when he tried to abandon the project in the editing room and refund their money.

In the film, Nelson appears on camera discussing how middle-class black people have to do certain things “to make white people feel comfortable.” No one had broached that topic in documentaries, he said.

Nelson’s lifelong efforts to capture conversations about race on film reverberate in today’s documentary landscape, in which more filmmakers are examining racial discord. AFI Docs films also included Welcome to Leith, scheduled to air on the upcoming season of Independent Lens, which follows a white supremacist’s recent attempts to take over a small North Dakota town.

Nelson talked about his next project, a film about historically black colleges and universities, noting that HBCUs house a wealth of untapped archival material. The subject is personal, since his father graduated from Howard University, an HBCU. As always, Nelson said he aims to make movies for black audiences, not white ones.

“I’m not the explainer,” he said. “There’s this tendency to want to be the African in the Tarzan movies — you hear the drums, and Tarzan says, ‘Oh, what do those drums mean?’ ‘Oh, Tarzan, the natives are mad!’ I’m not doing that.”