The new top news executive at NPR hopes that increased collaboration with the network’s member stations can produce stronger local and national journalism.

NPR announced Thursday the hiring of Michael Oreskes as senior v.p. for news and editorial director. He begins in the position April 27. Oreskes will report directly to NPR President and CEO Jarl Mohn, under the new management structure Mohn implemented in October 2014. 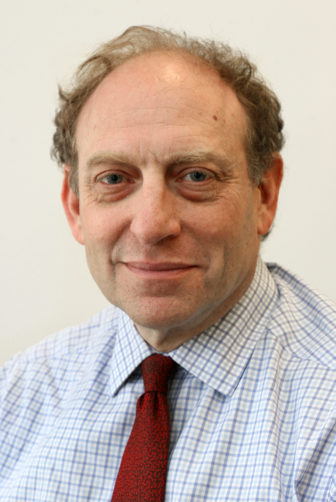 “Public radio is one of the great institutions of this country,” Oreskes told Current in an interview. “The opportunity that lies ahead for public radio to do more great journalism, as NPR and the member stations can work even more closely together, is huge.”

NPR also promoted Chris Turpin, who has led NPR News on an interim basis after Margaret Low Smith left the position last year, to v.p. of news. The position has been repurposed with additional responsibilities and changes in newsroom hierarchy, according to NPR, and fills the void left by Ellen McDonnell when she retired last year.

Oreskes “brings a unique perspective on how to cover the most important stories of the day and an understanding of the issues that are being overlooked or not reported well,” said Mohn in a press release.

Former colleagues of Oreskes’ had high praise for him as a journalist and newsroom leader.

“I have great respect for Mike,” Bill Keller, former New York Times executive editor and a colleague of Oreskes’ at the Times, told Current in an email. “He’s a Serious Newsman, capital S, capital N — by which I mean he’s deeply curious, an aggressive competitor, and has high standards.”

“I don’t know what plans he has for NPR, but at the very least his arrival means that one of our greatest journalistic treasures is not about to take a dive down-market,” he said.

“He’s just what NPR needs right now — a very serious journalist, but just as importantly he’s a great leader and change agent,” said Vivian Schiller, former NPR president and CEO and a Times colleague of Oreskes’, said in an email. “I don’t see him letting NPR rest on its laurels.”

In addition to supervising AP’s global news coverage, Oreskes also “coordinated with member newspapers and broadcasters of the AP for more collaborative journalism tailored to respond to regional and local news,” according to NPR.

That experience may aid Oreskes in collaborating with NPR’s member stations. “Deeper, even more robust collaboration with our colleagues at public radio all over the country” is a “very high priority” as he enters his new role, he said.

“NPR needs them, and I hope they feel they need NPR,” he said.

Oreskes is considering what those collaborations could be and points to NPR’s collaboration with WNYC in New York City during Hurricane Sandy as one effective model. “I’d like to see much more of that all over the country,” he said.

And he sees an opportunity for NPR and member stations to work together on investigative reporting. “What if a local station realizes they’re on a great story but doesn’t have the resources on their own to dig it out?” he said. “. . . What if they had a resource to call NPR to say, ‘Listen, I have an idea for an investigative project, but I only have three reporters at my station. How can I work with you to get this done?’ And what if we had some ability to send them some help and work with them?’”

The bottom line, he said: “The result we need is more robust local reporting for national audiences.”

Oreskes lacks experience in radio and admits that he has learning to do in that area. But he believes his experience in journalism will outweigh any lack of radio skills.

Going forward, radio and digital will be equally important to NPR, he said.

“If it becomes a contest between who are we going to gut to help somebody else, we lose,” he said. “I truly believe that we can build more and bigger and even more loyal audiences for the radio broadcasts . . . and then at the same time we can build new audiences on new platforms.”