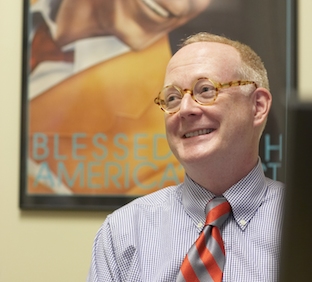 “When we decided we wanted to hire a chief content officer, we started asking our friends who we should talk to,” said Adam Sachs, c.e.o. of Midroll Media. “. . . Chris’s name came up without fail in every conversation.”

“His experience in both narrative, story-driven audio programming and comedy and in building big shows at WNYC . . . just make him a great fit for what we have done to date and what we want to do moving forward,” Sachs said.

Midroll Media is the parent company of Earwolf, a comedy podcasting network that includes shows such as Comedy Bang Bang and How Did This Get Made?, and Wolfpop, a network of podcasts about pop culture. Midroll Media also operates a service that finds advertisers for podcasts, also named Midroll.

Bannon has worked on numerous national programs within public radio. At WNYC, he has helped develop new content and has overseen shows including Studio 360 and Freakonomics Radio. Before joining WNYC in 2002, he worked on A Prairie Home Companion and Here and Now.

The opportunity to grow a podcasting audience for a company that’s producing some of his favorite shows appealed to Bannon, he told Current.

“I can step in and work with them to serve the audience better, grow the shows, gain some really valuable experience,” Bannon said. “I come from the world of spending money, not making it. It’s really going to be an education for me, helping to grow the business. I’m excited about that.”

Bannon credits Serial with bringing podcasting more into the mainstream and believes it still has room to grow.

“I still believe there is a tremendous part of the world that doesn’t yet know about podcasting and how entertaining and fun it can be,” Bannon said. “So my real job [at Midroll Media] is to make sure the comedy and the pop-culture parts of our enterprise are punching at the highest possible level and also see how many more verticals like that we can create and find audiences for.”

Since Serial, “the spotlight feels like it’s on the podcast medium more than ever,” Sachs said. It’s too early to measure Serial’s effect on Midroll, but the company’s revenue tripled from 2013 to 2014. That growth rate has continued through the first half of this year’s first quarter.

Bannon joins a growing list of WNYC talents who have left the station for podcasting ventures, including Gretta Cohn, a former senior producer for the Freakonomics podcast who now works for Midroll.

“I started in public radio 25 years ago, and nobody was thinking of radio as a place to throw your career at,” Bannon said. “It’s just kind of amazing and beautiful to me that in the last decade, podcasting has excited people in their 20s and 30s to think about making their own audio. . . . We used to have to work through the mechanism of the station to find a broadcast audience. Now you can work out of your living room.”