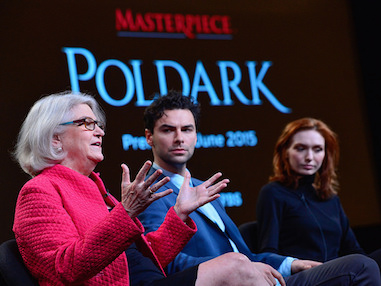 Kerger said she would not be able to provide specifics about the project for at least a couple of months but that it will “shine a brighter light on the arts.” She alluded to the project after being asked about her programming priorities.

Arts programming, she said, is “the one thing I’d love to see us really expand and grow, because I think it’s so tremendously important.”

During her semiannual press conference with TV writers, Kerger said upcoming programs related to the Vietnam War are particularly relevant because this year marks the 40th anniversary of the fall of Saigon and the war’s end. The programs include “Last Days in Vietnam,” airing as part of American Experience; The Draft; The Day the 60’s Died; Dick Cavett’s Vietnam; and, in 2017, a Ken Burns documentary about the war.

“Last Days in Vietnam,” nominated for an Oscar this year, is to be streamed by PBS and on PBS station websites Feb. 5–7. “We think this is a great way to give Academy voters and the American public an opportunity to view the film before Oscar night,” said Beth Hoppe, chief programming exec.

“The interesting thing about a 40-year anniversary is that you still have a lot of principals that are alive and can speak directly about their experiences,” she said. Also, teachers find the anniversary to be a good way “to help bring the subject to life.”

Other programming announcements made during the first day of PBS’s two-day part of the TCA tour included an American Experience special about the life and legacy of Walt Disney. Mark Samels, exec producer of American Experience, said the program will run for four hours over two nights this fall.

Rebecca Eaton, Masterpiece executive producer, told TV writers that she is optimistic that “Poldark,” featuring an 18th-century hero and based on the novels of Winston Graham, will enjoy additional seasons on PBS. “This is a series which could go on and on and on,” she said of the program, which premieres in June. Ultimately, though, the decision to make more seasons will rest with the show’s BBC producers.

An earlier version of “Poldark” aired on Masterpiece Theatre in 1977. Eaton said other Masterpiece properties are also being considered for updates, though she declined to name any titles.

As an experiment, Eaton said, Masterpiece will show the premiere of “Wolf Hall” starting at 9:55 p.m. April 5 instead of at the top of the hour. The time change will help PBS accommodate the broadcast of the longer BBC version, she said, and perhaps hold more of the audience from the previous show, an episode of “Mr. Selfridge.”

Also announced was the first ever Cookie Monster special, an hourlong program, The Cookie Thief, to air Feb. 16.

In addition, Barak Goodman, director of Cancer: The Emperor of All Maladies, a forthcoming history of cancer, revealed that the film’s narrator, Edward Herrmann, struggled with brain cancer even as he worked on the show. Herrmann collapsed during his first day at the studio, Goodman said. Only then did he reveal his illness.

“He was confident he could finish this and he could do this,” Goodman added. “He felt it was appropriate that this be his final project.”

Herrmann succumbed to the illness Dec. 31.

PBS was forced to cancel one session scheduled for Monday. Master magician and illusionist Ricky Jay, the focus of an episode of American Masters, had fallen on ice and broken a rib, PBS announced.

In other PBS news from the TCA tour: